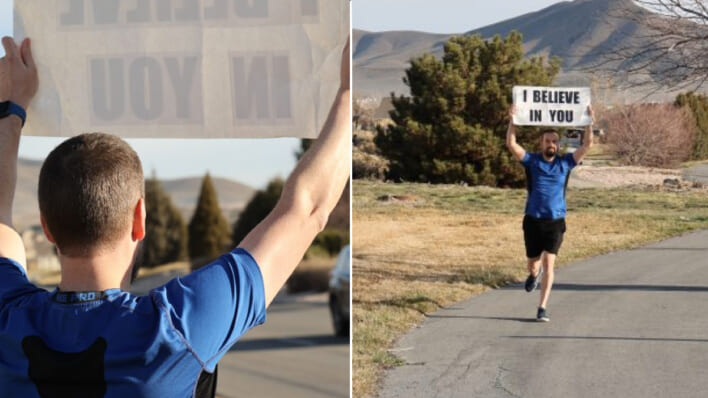 One Utah-based runner has taken his sport to the next level by spreading hope and self-belief as he clocks in miles.
By Lindsey Staub    September 7, 2022

One Utah-based runner has taken his sport to the next level by spreading hope and self-belief as he clocks in miles.

Ben Lyne wants you to know he believes in you, and he’s made a sign to prove it.

Lyne has been an avid runner for over a decade, but in February this year, he switched things up. Instead of running alone through his town of Eagle Mountain and the surrounding neighborhoods, he started to bring a sign. The words on the sign were simple and printed in all caps: “I believe in you.”

“I am a big Lord of the Rings and Avengers fan, and I love the scenes when the heroes are charging,” Lyne said. “When I see something like that, it makes me think ‘I got you. I believe in you. You got this.’ That inspires me and gives me motivation. I wanted to spread that message to others.”

Lyne came up with the idea to run with an inspiring sign a long time ago but was always dissuaded by his own hesitation. “I started getting this idea a few years back because I would see people driving to school or work while I was out running,” Lyne said.

“You can kind of see on their faces, and it was kind of how I used to feel when I had to go into the office, and you’re just like, ‘Ughhh, I have to go to work.’ When I had the thought to do this, it was so out of character and a little intimidating. I would just have these doubts creep in, like ‘I’m not an outgoing person,’ so I just put the thought away.”

Finally in February, Lyne decided to shove away his insecurities and bring positivity to his town.

How Utah Runner Ben Lyne Made an Impact with Inspiration

Initially, Lyne didn’t know if his sign was actually making the positive impact he hoped it would. On top of that uncertainty, the sign made Lyne’s running more difficult.

“Running with a sign is actually really hard,” Lyne said. “You don’t realize how much you use your arms when you run, and when you’re running into the wind or up a hill, it’s really hard. My first run was actually harder than I thought, and I wasn’t sure I would even be able to make it through it.”

However, Lyne kept on running and finally saw it pay off.

Lyne doesn’t often use social media, so it wasn’t until a friend showed him some Facebook posts that he knew people were receiving his message. Several posts garnered more than 700 likes. Not only were they writing about seeing Lyne and his sign, they also included stories about how that moment helped their day.

“I have been dealing with anxiety and I was out taking pictures of birds early in the morning when I saw him jogging toward me with a sign,” Eagle Mountain resident Mitzi Muse said. “I couldn’t wait to see what it was about, and as he got closer I smiled from ear-to-ear seeing what his sign said. It’s so wonderful to see that there are still caring, loving people in the world. It made my day.”

One man saw the sign on his way to a doctor appointment for a follow-up cancer treatment.

“When I first saw Ben holding up his sign, I was driving to the University of Utah Neurosciences Center,” Jordan Smith said. “I have a long history of health issues from brain cancer, epilepsy, multiple brain surgeries, and so on… That day I saw Ben holding his sign up was just what I needed to get through my appointment. It helped me calm my nerves and believe that everything would be OK. I might just request Ben to go running the next time I have a check-up MRI at the Huntsman Cancer Center.”

How One Runner’s Homemade Sign Saved a Man from Suicide

“I had a guy just last Saturday near Macey’s in Lehi pull around and stop to talk to me. He said he was thinking about ending his life, and saw me out of the blue and snapped himself out of it,” Lyne said. “He was really emotional. The whole rest of the run, I was overcome by that.”

“I recently went on a business trip to Washington D.C., and then on a trip to Paris, and I brought the sign with me to both places,” Lyne said. “Usually, I will just not run on trips, but I want to spread this message to as many people as I can. It’s a lot of extra work, but it seems to do a lot of good. Now it’s kind of like my thing that I need to do every time. It’s given me a lot more meaning out my runs.”

The positive reactions have been meaningful to Lyne, but he notes that it was never about him; it was always about the message.

“The goal isn’t to be noticed or to be a local celebrity,” Lyne said. “I want it to be about the message, but not about me.”

“I believe in you” will continue to be spread as Lyne continues to run several miles a week. His inspirational message not only reassures passersby that he believes in them, but it also encourages them to believe in themselves.