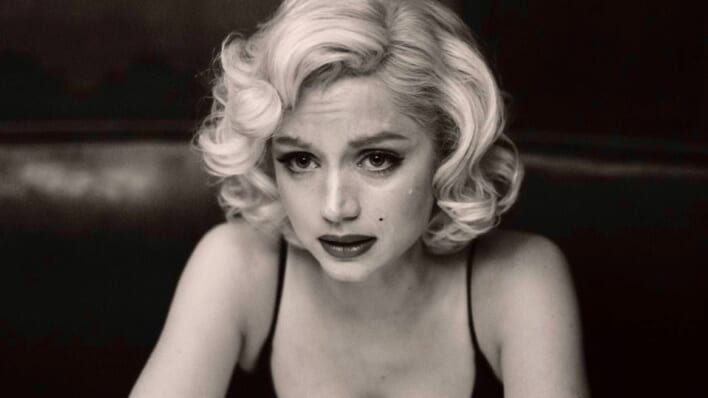 Netflix’s Marilyn Monroe drama Blonde has received backlash since its release. But why are people so disturbed by the film?
By Bianca Mercuri    October 9, 2022

Netflix’s Marilyn Monroe drama Blonde has received backlash since its release. But why are people so disturbed by the film?

One of Netflix’s newest releases is the Marilyn Monroe drama Blonde. Somewhat advertised as a biopic and not inherently known to be fiction, many Netflix subscribers were eager to see the life of Monroe unfold on-screen. Unfortunately, this was not the case. What was meant to portray the highly publicized, yet mysterious life of Marilyn Monroe turned into a heavily fictionalized version of her story.

RELATED: Top 20 Marilyn Monroe Quotes to Inspire You to Shine

With so many viewers upset about the film’s contents, it’s impossible to deny the questionable plot elements that riled them up in the first place. Let’s explore Blonde and the backlash it’s getting so we can determine whether or not it merits all the hate it’s receiving.

Ana de Armas plays the lead role of Monroe in Blonde. Despite its never-ending flaws, Armas’ is always impressive with her acting talent and commitment to the character. Unfortunately, it’s the characterization of Monroe herself that has caused the most ire among fans.

The movie is based on the novel by Joyce Carol Oates, also called Blonde. The book was intended to be a fictionalized version of Monroe’s life, dramatizing elements we already knew. The film was released on September 23, 2022, and by the following week, it had gone viral online – and not in a good way.

RELATED: The Truth Behind Marilyn Monroe and JFK’s Tragic Affair – And Why It Matters Today

While some knew that this was a fictionalized telling of Monroe’s life, it wasn’t obvious to those who aren’t familiar with the book. This is where some of the issues lie. Because while Blonde manipulates real-life elements for the purpose of entertainment, it’s still a real person at the center of it. Monroe was a woman who went through a version of these events, and so starts the criticism of the insensitivity of some of the horrors that she endured during her short life. The movie capitalizes on her suffering by amplifying what really happened.

A massive point of controversy in the film is the way they depicted abortion and sexual assault. In the aftermath of Roe V. Wade, the film contributes to an anti-choice narrative that did not lend itself well to public opinion. It also shows very graphic sexual assault scenes that some deemed as disturbing.

The film portrays Monroe as having two abortions against her will with a scene showing her talking to a fetus. The way the fetus was shown was medically inaccurate and contributed to anti-abortion arguments. Meanwhile, the sexual assault scenes were not only horrifying in their details but also factually incorrect. Monroe was sexually assaulted in her life, but not in the way the film would have the audience believe. They used rumors ,such as Monroe’s possible affair with US president John F. Kennedy, to fabricate sexually explicit scenes that can’t be verified.

How Are People Reacting to Marilyn Monroe Drama “Blonde”

The response to Blonde has been about more than just hating the film’s content. The criticism has been both emotional and angry, fuelling many women to speak out about why the film perpetuates misogyny.

One Twitter user says, “It is exploitative, demeaning, and not an accurate representation of the power and wit that was Marilyn Monroe. I feel ashamed for watching this; what a misogynistic, black and white view of a multifaceted and complex woman.” Other uses agree with the view that the film takes away any three-dimensional character progression and shows Monroe as a one-sided and flat person. This most likely is a direct link to how the director feels about women as a whole.

Another Twitter user takes this theory a step further and says, “The fact people are going to watch @netflix’s #Blonde and think it’s even REMOTELY accurate really boils my blood. The director should never ever work again, he literally thinks she was a whore, that all women are whores, he doesn’t even like her movies. He’s a bastard.”

And it’s not just the audience at home that’s making statements. In fact, Caren Spruch, Planned Parenthood’s director of arts and entertainment engagement, had a lot to say about Blonde. “While abortion is safe, essential health care, anti-abortion zealots have long contributed to abortion stigma by using medically inaccurate descriptions of fetuses and pregnancy.” Spruch added, “It is a shame that the creators of Blonde chose to contribute to anti-abortion propaganda and stigmatize people’s health care decisions instead.”

Emily Ratajkowski took out her rage about Blonde on Tik Tok, calling out the film for “fetishizing female pain, even in death”. I think that encapsulates everything that most people are feeling about the film and accurately describes what the movie subtly expressed the entire way through.

Should Netflix’s “Blonde” Be Removed From The Platform?

Don’t get it twisted, Blonde is fiction and never claimed to be otherwise even though its vague advertisement confused many into thinking it was a biopic. This confusion contributed to the shock of the actual film and enraged viewers as they saw a highly dramatized version of the life and death of a beloved public figure.

There were more things wrong with Blonde than right factually, but the most horrific thing about it was the director’s blatant lack of self-awareness in his misogyny and underlying hatred for women. Seeing the way that Monroe was written shows how deeply rooted our sexist and negative views of women are in Hollywood.

RELATED: Netflix at 25: How Streaming Changed the Way We Have Sex, Fall in Love & Live Our Lives

The bright side of this is that people are realizing it and not sweeping it under the rug. We are calling it out and taking it at face value rather than making excuses for the way men make women feel. The film is just a prop in the more prevalent issue of misogyny, but the criticism that it receives actively fights against it. Films like Blonde are an opportunity to say that this is not okay behavior.

So, should Blonde be removed from the platform? That’s a loaded question and involves a lot of debate about free speech. It’s important to note that we can’t control the media and what’s published for the world to see. But, we can combat it and in consequence raise more awareness for the sexism that still runs rampant in Hollywood.

How True Is Netflix’s Monster to the Real Jeffrey Dahmer Story?