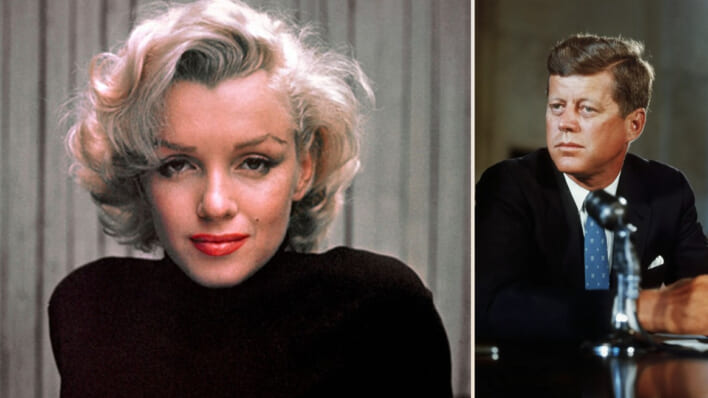 What happened when two of the most powerful personalities of the sixties crossed paths? And how did their amorous entanglement impact our perception of gossip?
By Shaoni Das    September 16, 2022

What happened when two of the most powerful personalities of the sixties crossed paths? And how did their amorous entanglement impact our perception of gossip?

It’s a mystery we have been pondering for nearly sixty years, and we still haven’t come any closer to figuring it out.

Did Marilyn Monroe and John F. Kennedy have an affair? In all likelihood, the truth died with the figures in question, but that doesn’t mean people haven’t spent an exorbitant volume of time and energy fixating on the rumor. Celebrity gossip has always intrigued us, and the most scandalous stories have a way of transcending the passage of time, especially as the parties involved resurface in the public consciousness.

One could argue Marilyn Monroe never left the limelight in the first place. She essentially laid the groundwork for how femininity is presented and understood in modern society, with her style, mannerisms, and elegance guiding subsequent generations of women through the years. Yet, at the same time, her legacy is marred by the struggles she faced behind closed doors, which are finally seeing the light of day and being contextualized with some of the more relevant concerns around present-day celebrity.

Marilyn’s alleged affair with JFK is not only an encapsulation of the actress’s complex relationship with fame, but it also speaks to the most critical challenges we’re facing as a collective.

Though Marilyn and JFK were two of the most influential figures in the world at the time, they didn’t actually cross paths until 1962, as per multiple historians. However, they did move around in similar circles and had come close to bumping into each other quite a few times in the late fifties. For example, both attended the Paris Ball at the Waldorf-Astoria Hotel, New York, in April 1957. A few years later, they were present at a Hollywood party thrown by Peter Lawford but still didn’t get a chance to meet. In 1962, the two were spotted socializing at singer Bing Crosby’s home in Palm Springs, California, by several sources.

Monroe’s friend and masseur Ralph Roberts told the press that when he called Monroe the same weekend, he reportedly heard Kennedy’s voice in the background. Roberts later stated that Monroe confided in him about the affair, which was apparently a one-time dalliance for both individuals. “Marilyn gave me the impression that it was not a major event for either of them: it happened once, that weekend, and that was that.” Roberts also added that Monroe and Kennedy initially bonded over their muscle and back ailments, and that Kennedy personally jumped on the line to thank Roberts for his “professional advice.”

RELATED: Top 20 Marilyn Monroe Quotes to Inspire You to Shine

Susan Strasberg, a friend of Monroe, also corroborated Roberts’ account by writing in her book that the Some Like It Hot actress “loved the secrecy and the drama of” sleeping with the President. But she also made it clear that she wouldn’t want to spend the rest of her life with Kennedy, notwithstanding that they were married to other people.

Their final meeting reportedly occurred on May 19, 1962, when Monroe was invited to sing at Madison Square Garden for Kennedy’s early birthday celebration. She delivered a slow, sensual version of Happy Birthday, inserting ‘Mr. President’ in place of Kennedy’s name, before finishing off with her rendition of ‘Thanks For the Memory.’ For the latter song, she customized the lyrics to speak to Kennedy’s specific glories, with references to the ‘battles’ he’s won, how he dealt with ‘US Steel,’ and all the ‘problems’ by the ton.

It was a performance that launched a thousand rumors. Monroe enthralled the nation, her intangible charisma that had been forgotten and tarnished over the years shining through once more. Afterward, Kennedy appeared on stage and said, “I can now retire from politics after having had Happy Birthday sung to me in such a sweet, wholesome way.”

Tragically, the night also marked one of Monroe’s last public appearances, as she was found dead just three months later, on August 4, 1962. A year later, on November 22, 1963, John F. Kennedy was assassinated in Dallas, Texas, by Lee Harvey Oswald.

Both passed under tragic, mysterious circumstances that intrigue us to this day. Though JFK’s assassination was clear as day, there are questions about Lee Harvey Oswald, who was shot down two days later, and his motives, Monroe’s death was ruled as probable suicide by an overdose of barbiturates, but it didn’t stop the invention of conspiracy theories – everything from a Kennedy coverup to CIA machinations.

The truth of the matter is that neither of them lived long enough to confirm nor deny the hearsay. The ins and outs of their personal lives have been dissected, dramatized, and dragged to no end, and they will never be able to stand up for themselves and set the record straight. While many historians agree that there may have been some kind of a liaison between Monroe and Kennedy, it’s unlikely we’ll ever get to the bottom of this enigma.

However, what we can take away from this tragic episode, is that our words have consequences and that we need to be careful about being defined by what others say or think. Monroe suffered her whole life as a victim of her own fame: sure, she was considered the most glamorous, gorgeous woman of her era, but she was also plagued by deep-rooted insecurities that weighed down on her until her final breath. Today, the fact that her alleged fling with JFK is more of a trending topic than her body of work is a scathing indictment of society’s priorities.

Why do we care so much about celebrities’ romantic involvements and their feuds, and their fashion faux pas? Do we really seek to understand their difficulties and traumas and daily struggles? Of course, it’s not necessarily a bad thing for people to be fascinated by Monroe and Kennedy — we’re always going to be drawn to the unknown, the little mysteries that are teased but never resolved.

At the same time, we have to empathize with the Marilyn Monroes of our generation and see whether our treatment of them would hold up in future discussions. Should we try to impose ill-advised labels on celebrities, just as Marilyn Monroe was dubbed a ‘sex symbol’ in the wake of her Happy Birthday performance? Or should we let them live their lives on their own terms and only provide feedback on their work, not on their lives?

What Marilyn Monroe and JFK’s Affair Teaches Us About Labels

The ‘Happy Birthday Mr. President’ moment was seen as a highlight for both personalities, but today, we view the clip from a place of sadness, tragedy, and regret. Neither of them had any idea how their lives would come to an end, and if they did, they probably would have taken more measures to protect their well-being, both from a physical and mental standpoint.

None of us quite know how it all ends; the best we can do is make sure we aren’t remembered for things outside of our control. We want to live our lives to the fullest and ensure everyone around us can do the same. This means, keeping the focus where it matters and isolating yourself from the noise.

Shania Twain’s World Shattered When Her Husband Revealed His Affair