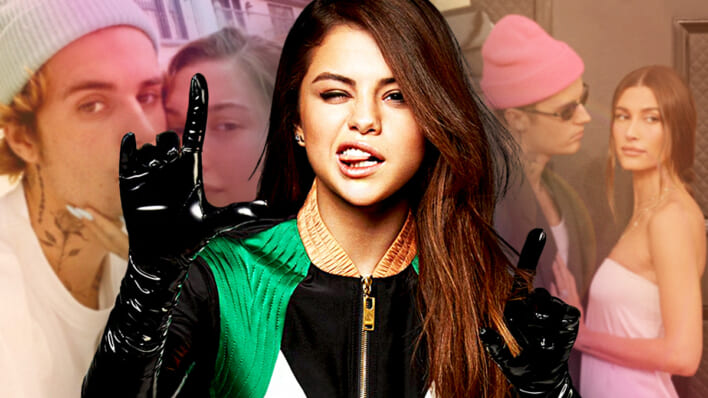 Selena Gomez has had her fair share of negative press after years of rumored feuds with Justin Bieber and his wife, Hailey. But through it all, Gomez has managed to stay out of the drama, and make some real changes to the ongoing mental health crisis.
By Bianca Mercuri    July 8, 2022

Selena Gomez has had her fair share of negative press after years of rumored feuds with Justin Bieber and his wife, Hailey. But through it all, Gomez has managed to stay out of the drama, and make some real changes to the ongoing mental health crisis.

Selena Gomez is one of the many young Disney Stars whose career has blossomed into a Hollywood A-lister. She’s done it all: acting, singing, dancing, and a combination of all three in the film Another Cinderella Story. But despite her immense success, philanthropic work, and kind demeanor, the star still hasn’t been able to escape the Hollywood drama surrounding a relationship that ended nearly five years ago.

Gomez’s on-again, off-again relationship with pop superstar Justin Bieber has been under public scrutiny since the two began dating in 2010. The media frenzy surrounding the celebrities proved to be too much and the pair finally split for good in 2018.

Both Gomez and Bieber have moved on professionally and personally, so why is their feud still making waves in the media?

RELATED: How Hailey Baldwin Dealt With Being In A Love Triangle Involving Selena Gomez

Gomez is rarely known for being a controversial celebrity. She has taken time to openly discuss her health battle with Lupus and her recent bipolar diagnosis as well as being a mental health advocate. The star also recently teased that she is back in the studio for a possible new album.

This is a professional who has little time for post-Bieber drama.

On New Year’s Eve 2011, Bieber and Gomez were spotted kissing on a yacht while vacationing in St. Lucia. Only a few months before, the then 18-year-old Gomez and 16-year-old Bieber denied any type of relationship after being spotted at a local IHOP.

“It was just pancakes!” said Gomez, which turned out to be celebrity speak for, yes, we are dating.

While denying the relationship rumors for months, fans were still skeptical that there was a budding romance in the air. Bieber and Gomez made it official when they arrived at the Vanity Fair Oscar Party in February of the same year.

Wearing complementary colors, the photos remain fan favorites and spearheaded an era of Gomez and Bieber that is severely missed by fans.

RELATED: Why Selena Gomez’s Excitement At Turning 30 Is The Right Attitude

After two years of dating, the couple officially split. The on-and-off-again pattern continued for several years, but it was until 2014 that things became more stressful for the two young adults.

Gomez checked into rehab for Lupus, a new health development that left fans wondering if she would ever return to the spotlight. While undergoing chemotherapy, Gomez removed herself from the spotlight to focus on healing.

Meanwhile, Beiber was honing his newfound bad boy image when he was arrested for drunk driving, drag racing, driving without a valid license, resisting arrest, and vandalism. In the summer of 2014, he also allegedly got into a fist fight with actor Orlando Bloom in Ibiza, Spain.

But the chaos truly started when Bieber posted an Instagram photo of then-girlfriend Sofia Richie, resulting in major fan backlash.

After threatening to delete his Instagram altogether because of the hate, Selena did something uncharacteristic and responded in the comments section.

“If you can’t handle the hate then stop posting pictures of your girlfriend lol – it should be special between you two only. Don’t be mad at your fans. They love you.”

The pair went on to accuse each other of cheating in the online comments before Gomez apologized via Snapchat and Bieber finally deleted his account entirely.

Things started to get messy the minute Hailey Baldwin (now Bieber) was thrown into the mix. In 2016, Bieber told GQ magazine, “What if Hailey ends up being the girl I’m gonna marry, right? If I rush into anything, if I damage her, then it’s always gonna be damaged.”

This was followed by Bieber and Gomez reuniting in 2017 for a brief rekindled romance. Not long after, the two split for the final time, and by July of 2018 Baldwin and Bieber announced their engagement. At this point, the love triangle is formed in the eyes of the internet.

Beiber and Baldwin were officially married in 2018 but it was only in 2019 when the two tied the knot in front of friends and family, giving their fans the wedding photos they wanted.

RELATED: How Selena Gomez Purged All Toxicity From Her Life To Become Her Better Self

Fans and media began to take sides, pitting Baldwin and Gomez against one another. The two women have spoken out against the portrayal of their relationship. Baldwin took to Instagram in April of 2019 to address the feud.

“You little internet Kiddos need to learn how to move on for real,” She wrote, “We’re adults that have better things to do than waste time explaining something just so you can stop your delusional fantasies. I’m not gonna sit here and let obsessive strangers try to tell me about my own husband.”

Later that year, following the release of Gomez’s song “Lose You to Love Me”, fans were convinced that Baldwin’s Instagram post of a song titled, “I’ll Kill You” was in response to the single. Gomez quickly tried to diffuse the tension. “I do not stand for women tearing women down,” She said in an Instagram live, “I will never, ever be by that, so please be kind to everyone. It doesn’t matter what the situation is, if you’re my fans, don’t be rude to anybody please.”

RELATED: Selena Gomez Thanks Friend Who Saved Her Life In Emotional Speech

Even with the two squashing their metaphorical beef, the internet can’t let go of this feud; seemingly created by everyone but the three involved.

In fact, in May of this year, Gomez posted a “Get Ready With Me” style Tik Tok which fans assumed was a shot at Baldwin’s YouTube content. Gomez shut this down instantly. “This is why I believe in taking care of your mental health,” she said, “No idea what I did but I really am sorry. Zero bad intention. Deleting soon.”

Gomez talks bluntly and openly about her mental health. In an interview with Elle US, she addresses her bipolar disorder as well as her lupus diagnosis, connecting her physical and mental health.

“My Lupus, my kidney transplant, chemotherapy, having a mental illness, going through very public heartbreaks,” She told the magazine, “These were all things that honestly should have taken me down.”

Gomez has undeniably gone through low points, including life-altering treatments. All of it was made more difficult by the media dragging her into Bieber’s new marriage and a relationship in which she had no interest. Gomez’s online presence is not spotless, but it’s pretty clean for a celebrity of her caliber. She’s done a great job at focusing on herself and leaving the trivial behind.

RELATED: Selena Gomez Shares How She Deals With Toxic Lies As She Battles Personal Struggles

Gomez’s struggles have fuelled her to do good. “Every time I went through something, I was like ‘What else? What else am I going to have to deal with? You’re going to help people,” Gomez said to Elle US, “That’s really what kept me going. There could have been a time when I wasn’t strong enough and would have done something to hurt myself.”

Mental health is not something to take lightly, which Gomez knows better than most. She has been on her own journey of self-healing and is now vowing to help others through the Rare Impact Fund.

How Is Selena Gomez Using Her Platform To Elicit Real Change?

Rare Beauty is Selena Gomez’s official makeup brand sold exclusively through Sephora or the Rare Beauty website. When launching Rare Beauty, Gomez made it known from the start that being an advocate for the mental health crisis was her goal.

The site provides useful resources for anyone struggling with mental illness, but it’s her actual mission that is making the greatest impact. Over the next 10 years, the Rare Impact Fund will raise $100 million to help give people access to mental health services.

RELATED: Why We Need To Talk About Hailey’s Decision to “Stick It Out” With Justin In The Worst Year Of His Life

Despite everything Gomez has been through, including her health and the unnecessary drama, she’s used her platform and celebrity to spread positivity. Nothing in her life has yet to break her down but rather sparked a desire for change within herself and the global community.

While still in the spotlight through her current on-screen work and music, Gomez has managed to navigate the drama and aimed for a more supportive society. Her tenacity and positive disposition are lessons to us all.