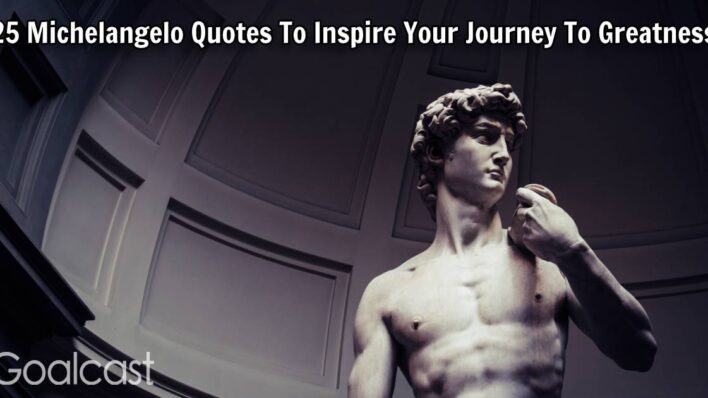 25 Inspiring Michelangelo Quotes To Inspire Your Journey To Greatness

Michelangelo was and remains one of the greatest Italian Renaissance artists of all times. Here are 25 inspiring Michelangelo quotes on art, beauty and life.
By Flavia Medrut    November 11, 2020

Michelangelo was and remains one of the greatest Italian Renaissance artists of all times. Here are 25 inspiring Michelangelo quotes on art, beauty and life.

Michelangelo di Lodovico Buonarroti Simoni (1475-1564), was a famous Italian Renaissance sculptor, painter, architect, and poet who had a remarkable influence on the development of Western art.

Michelangelo was born in Florence, to a family that belonged to minor nobility. Sadly, they lost their status by the time the sculptor was born. Even though going from nobility to creating art was considered a downward social step, Michelangelo became an apprentice to a well-known painter named Domenico Ghirlandaio. Later on, he went to study sculpture in the gardens of the influential Medici family.

Unlike many other artists that received their laurels post-mortem, Michelangelo was considered the greatest living artist in his lifetime. In fact, his career was so well documented at the time that he was the first artist who had a biography published while he was alive.

Of course, he remains one of the greatest art creators of all times. His work consisted of vast and ambitious projects — the frescoes on the ceiling of the Sistine Chapel, David and Pieta are just a few examples of Michelangelo’s unparalleled talent.

Here are 25 Michelangelo quotes on art, beauty and life:

Your gifts lie in the place where your values, passions and strengths meet. Discovering that place is the first step toward sculpting your masterpiece, Your Life.

The greatest danger for most of us is not that our aim is too high and we miss it, but that it is too low and we reach it.

If people knew how hard I worked to get my mastery, it wouldn’t seem so wonderful at all.

Your greatness is measured by your horizons.

There is no greater harm than that of time wasted.

What spirit is so empty and blind, that it cannot recognize the fact that the foot is more noble than the shoe, and skin more beautiful than the garment with which it is clothed?

He who follows another will never overtake him.

Art is a jealous thing; it requires the whole and entire man.

I saw the angel in the marble and carved until I set him free.

As you give out, so shall you receive.

Love is a beautiful image, imagined or seen within the heart; the friend of virtue and gentility.

The idea is there locked inside. All you have to do is remove the excess stone.

Every beauty which is seen here by persons of perception resembles more than anything else that celestial source from which we all are come.

Gazing on beautiful things acts on my soul.

A man paints with his brains and not with his hands.

An artist does his most difficult work when he steps back from the blank canvas and thinks about what he is going to create.

The level of our success is limited only by our imagination and no act of kindness, however small, is ever wasted.

I couldn’t give you something mediocre even if that’s all you asked for.

The true work of art is but a shadow of the divine perfection.

It is necessary to keep one’s compass in one’s eyes and not in the hand, for the hands execute, but the eye judges.

Death and love are the two wings that bear the good man to heaven.

Read the heart and not the letter for the pen cannot draw near the good intent.

No great work of art is ever finished.