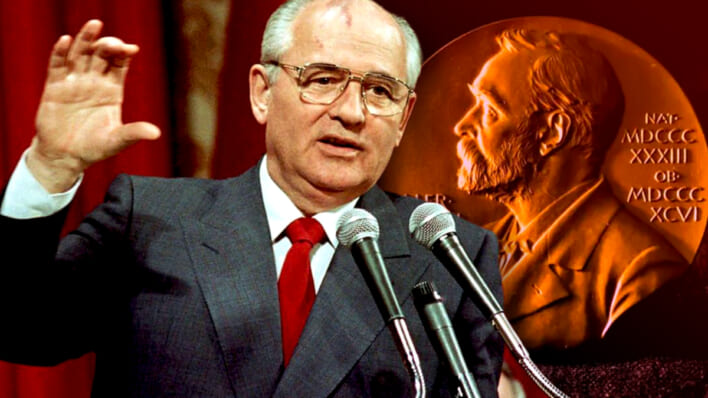 Singularly one of the most influential public figures of the 20th Century, Mikhail Gorbachev – the last president of the Soviet Union – has died. But what, truly, will be the legacy he leaves after his death?
By Freyja Catton    August 31, 2022

Singularly one of the most influential public figures of the 20th Century, Mikhail Gorbachev – the last president of the Soviet Union – has died. But what, truly, will be the legacy he leaves after his death?

Gorbachev is remembered for his impact on world politics while he was President of the Soviet Union, from his rise to power in 1985 to the USSR’s dissolution in December 1991. He was even awarded the Nobel Peace Prize in 1990 for his work in helping to end the Cold War.

RELATED: 85 Ronald Reagan Quotes on Freedom, Leadership and the Government

His most lasting legacy will undoubtedly be the fallout of his machinations, which resulted in his simultaneous existence as both a beloved savior in the West and a pariah in his home country.

Regardless of where anyone falls on that particular debate, there is simply no denying that Mikhail Gorbachev was one of the 20th Century’s most influential figures, nor that his goals, his decisions and his life were anything short of historic.

Born on March 2, 1931 in the village of Privolnoe, Gorbachev grew up in a peasant family during Stalin’s reign, and witnessed the Nazi occupation of his hometown at just 10 years old. His father and grandfather were supporters of the Communist Party, and Gorbachev joined in 1952. He completed his law degree in Moscow State University, where he met and married fellow student, Raisa Titarenko.

Gorbachev was ambitious, and rose quickly in the ranks of the party. He came to the attention of Mikhail Suslov and his mentor, Yuri Andropov, and was elected to the Central Committee in 1971, becoming a full Politburo member by 1980.

During his rise in politics, he traveled to Belgium, Germany, France, Italy, and Canada, which ultimately caused him to question the so-called superiority of Soviet-style socialism, and the high levels of poverty the Soviet Union seemed to produce. This internal conflict still existed within him in 1985, when, at 54 years old, he was chosen to succeed his mentor in the Communist Party, and became the President of the Soviet Union.

He was a charming and charismatic leader, and remained deeply critical of the standards of living in his country. He was also dedicated to ending the arms race with the West and shifting resources to the civilian sector. Gorbachev pursued political and economic reforms, aiming to make communism more open and democratic.

During his almost seven-year tenure as President of the Soviet Union, he introduced the concepts of “glasnost” (openness, or free speech), and “perestroika” (restructuring) to the country. His efforts were met with enthusiasm in the West and criticism at home. He dressed down and talked to people directly rather than perpetuating the “icy distant” style of rulers that preceded him. Unfortunately, his reforms were too fast for the party, and too slow for radical reformers.

Gorbachev Was a Contentious World Leader and Idealistic Advocate for Peace

When the reactor exploded in Chernobyl Nuclear Power Station on April 26, 1986, the Kremlin offered neither explanations nor reactions until May 14. Later, the event prompted Gorbachev’s push for more honest discussions of government failings. This “glasnost” allowed previously unthinkable criticism of the party and emboldened nationalists.

In the seven years he was President, Gorbachev freed political prisoners, allowed open debate and multi-candidate elections. He gave citizens the freedom to travel, ended religious oppression, reduced nuclear arsenals, and established closer ties with the West. His tenure also saw alcohol shortages, unsuppressed ethnic tensions, strikes, and labor unrest in the population. The unchecked protests fueled aspirations for autonomy in no less than 15 republics within the Union.

Despite the unrest at home, Gorbachev was especially successful in international foreign policy. The West liked working with him, and Margaret Thatcher famously said, “He’s a man you can do business with.” Gorbachev famously worked well with US President Ronald Reagan, and his suggestions led to the signing of the Intermediate Range Nuclear Forces Treaty in 1987.

RELATED: How a Russian DJ Went from the Soviet Union to a $26.5 Million Mansion in Beverly Hills

The agreements and partnerships forged by Gorbachev led to the lifting of the Iron Curtain in 1989, and the end of the Cold War. Pro-democracy protests swept across Soviet bloc nations of Eastern Europe, and Gorbachev refrained from using force. After a wave of newly independent nations, the Soviet Union was collapsing, which brought on further economic hardship, including hyper inflation, shut downs of factories, and bread lines in Russia.

In August 1991, a failed coup aimed at preventing the breakup of the country allowed his political rival, Moscow mayor Boris Yeltsin, to position himself as the leading reformer of the country. Four months later, Gorbachev resigned as President on December 25, 1991. The Soviet Union dissolved the next day.

In 1996, Gorbachev ran for president, but overwhelmingly lost to Yeltsin. He was bitter about how quickly he had been cast aside, but enjoyed giving speeches to young students.

What Is Mikhail Gorbochev’s Legacy?

Raisa Gorbochev died of leukemia in 1999. Mikhail Gorbachev took her death hard and set up the Raisa Gorbachev Foundation to fight children’s cancer. He also established the Green’s Cross for ecological issues, and the International Foundation for Socio-Economic and Political Studies, or the Gorbachev Foundation. He also led the Social Democratic Party of Russia in 2001-2004, and in 2007 was the head of the Union of Social Democrats, which set up the opposition Independent Democratic Party of Russia.

Although no longer in power, Gorbachev was politically active and continued to provide political commentary as a statesman. He veered between criticism and mild praise for President Vladimir Putin, saying Putin had done much to restore the stability and prestige to Russia, but criticized the growing restrictions on media freedom. In 2019, when the Treaty dissolved, Gorbachev expressed hopes that arms control agreements could be revived. Still, his legacy remains one of a world leader who was more successful abroad than he was at home.

Mikhail Gorbachev had one daughter, Irena, and two granddaughters. He will be buried in Moscow’s Novodevichy cemetery, next to Raisa. Putin is expected to send an official telegram of condolences to the Gorbachev family on Wednesday morning.