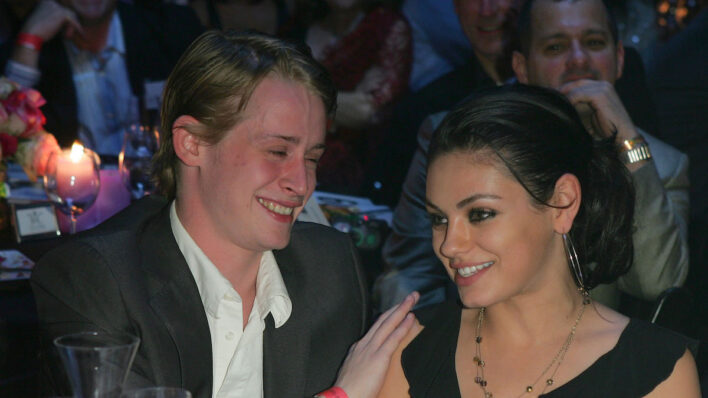 Why Mila Kunis Will Always Regret Her Breakup With Macaulay Culkin

Mila Kunis has finally opened up about her breakup with Macaulay Culkin and how much she regrets the way she handled it.
By Maya Khamala    February 18, 2021

Mila Kunis has finally opened up about her breakup with Macaulay Culkin and how much she regrets the way she handled it.

Celebrity relationships rise and fall from fame all the time, but chances are you haven’t heard much (if anything) about that time Mila Kunis and Macaulay Culkin dated—they were quite serious, in fact. Yup, you heard right.

Although she’s been Ashton Kutcher’s lady since 2012, the much beloved actress, like most of us, has a longer dating history rife with instrumental life lessons. Mila and Macaulay kept their 8-year-long relationship extremely private, which is why so many fans are clueless about the story behind their love. But in recent years, Mila has finally chosen to open up about how challenging the breakup really was for her and how much she regrets the way she handled it.

Mila and Macaulay were both child actors

Although the exact details around their first meeting are not clear, Mila and Macaulay, both child actors, likely met in Hollywood through mutual friends. Mila started dating everyone’s standout child actor, Macaulay Culkin in 2002, when the unlikely couple were still very young—18 and 21, respectively.

They started out long distance, as Mila was in LA, and Macaulay was in NYC. At the time, Macaulay was already semi-retired from acting, and Mila was on the opposite trajectory and just starting to gain some recognition for her role in That 70s Show.

In 2009, when the pair were still together, Mila opened up about their relationship, talking about how they grew up together as child actors in the spotlight, and relied on one another for emotional support.

You find a steady rock in your life and that’s all you need. We have our ups and downs, but work through them.

But even then, you could tell she wasn’t quite all in. “I don’t know if I met him at 27 if it would have been a different relationship,” she admitted. Mila has also talked about how dating someone with such a famous face complicated things at times, explaining how Macaulay’s fans had such a dramatic reaction to seeing him that it was hard to maintain much privacy.

While the pair dating, there were even rumors of them tying the knot, but Mila denied this. In fact, at the time, Mila insisted that marriage was not important to her. Her relationship with Macaulay was something she wanted to keep low profile—perhaps this was partly in reaction to Macaulay’s inherently high profile.

But then, in 2011, after going on a decade together, Mila’s publicist confirmed that Mila and Macaulay had ended their relationship.

Mila was in the midst of promoting her critically acclaimed role in Black Swan when her relationship with Macaulay was announced as officially over, but the couple is believed to have been broken up for at least a few months before this announcement. The general line was that the split was amicable, and that the two remained close friends.

In 2018, however, Mila went on Dax Shephard’s podcast, Armchair Expert, to tell it like it really was. She said it was “a horrible, horrible breakup.”

She didn’t say exactly what she did to her former beau, but insisted, “It’s f*cked up what I did and it’s f*cked up how I did it. When I got to be a single I said, ‘I just need to figure myself out.’ I genuinely need to know why I did what I did, and, like, regroup myself as a human being.”

The two have each moved on with their lives since then and have not remained friends, but when Shepard asked her if she had forgiven herself, Mila went on to say she and Macaulay have no hard feelings anymore.

You know, it’s been so long like I feel like enough time has gone by. I think enough mutual friends have been like, everybody kind of forgave everybody for what went down.

Ultimately, Mila’s admission was about both holding herself accountable for her immaturity in the relationship, as well as showing herself forgiveness. People don’t often put the two together, but Mila was onto something key when she chose to publicly own her less-than-respectable behaviour. Holding yourself accountable without forgiving yourself only prolongs pain, while forgiving yourself without allowing for accountability is equally problematic. It may have taken some time, but Mila’s move to address her long-ago breakup was a very positive one!

While it’s true that Mila and Ashton began dating not long after they both broke up with their previous partners, she has revealed that the night she and Ashton became involved romantically, he had actually tried to set her up on a blind date, but the guy never showed up at the house party they were at, and, well, the rest is history.

Past mistakes don’t dictate your future

Ultimately, it seems both Mila and Macaulay have long since recovered from the trauma inflicted by their difficult breakup, and have moved on to happier relationships. Mila with Ashton Kutcher, of course, who she started dating in 2012 and married in 2015. Macaulay with former Disney actress Brenda Song, who he began dating in 2017.

Of his new partner, Brenda, Macaulay has said, “Like, she just does nice things and I feel like I’m almost like, at first I didn’t know how to be treated well in that kind of way.”

This may or may not be a diss aimed at Mila, but the 37-year-old is now happily married, a mother of two, and has amassed the self-awareness to admit her past behaviours were wrong without allowing those past wrongs to compromise her sense of self today. It’s called growing up.