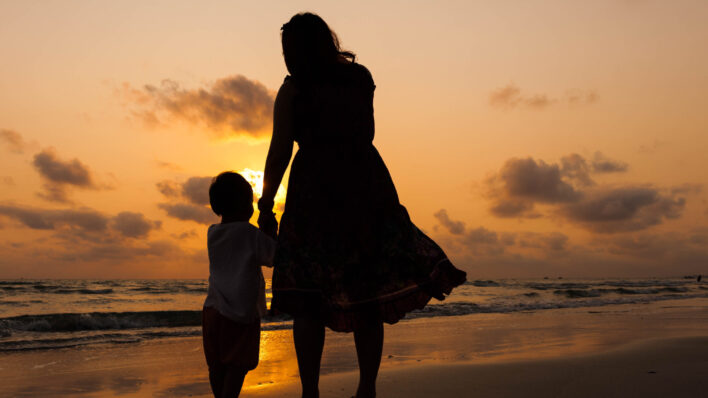 When does a mother stop being a mother? Is it when you get married? When you have your own kids?

When does a mother stop being a mother? Is it when you get married? When you have your own kids? It’s clear to me that the answer is “never.” So to celebrate this Mother’s Day, I share a story of how my mother cared for me when I “accidentally” burned my knees, and urge you to celebrate your mother every day of the year.

Mother for a Lifetime

We watched as the blazing trail of firecracker powder sizzled its way to the hole filled with a sizable and concentrated amount of even more firecracker powder. In a brilliant flash, the ignited powder sent a cloud of black smoke into the air, disappearing into the atmosphere as we stared wide-eyed in awe and excitement.

Our plan worked to perfection. All it took was a few hours of gathering the firecrackers that hadn’t gone off the previous night, during our celebrations for the Vietnamese New Year, Tet. It took another 30 minutes of peeling the firecrackers, disposing of the powder into a hole in the ground, and connecting it with a trail of the same element, to bring forth this glorious moment.

It was also a recipe for disaster.

To be as close to the action as possible, I sat ringside beside the hole with my knees extending right above it. When the smoke cleared and the excitement subsided, I was left with two knees blackened from the second-degree burn.

When the smoke cleared and the excitement subsided, I was left with two knees blackened from the second-degree burn.

All the kids, myself and my brother included, had no idea what to do.

We finally came up with the solution to walk like ninjas to the back of the house and wash the black bits off my knees. I didn’t feel any pain at that point. I was in total shock.

Washing the burnt areas turned out to be a bad idea, as the charred skin started sliding off my knees. I started bleeding.

The other kids ran home, of course. They didn’t want to be around for what was to come next. At the realization that we have to go see our mother, the pain kicked in. It was horrendous.

At the realization that we have to go see our mother, the pain kicked in. It was horrendous.

You might wonder, “Why didn’t she rush you to the emergency room?” You have to understand, this was 1993 Vietnam. The vast majority of people in the country struggled to survive. We had neither the convenience nor the money for hospitals or clinics. You did what you had to do with whatever medicinal herbs or traditional methods you could find.

The vinegar technique worked! I stopped bleeding and the two masses started eating away at the charred skin. The relief from the pain was tremendous, and I passed out from exhaustion. I woke up the next day with homemade bandages on my knees. I could barely move. What wouldn’t a mother do for her child?

One of my favorite dishes as a child was this wide-noodle dish with meatloaf, cucumber, basil, and fish sauce. We were poor. This was a luxury we had a few times a year. That day, my mother came into my room and gave me that dish. It was and still is the best thing I’ve eaten my entire life. It must have tasted extra special with her love and my tears mixed into the dish.

She took meticulous care of me the next several weeks. To bring me to class, she carried me to my desk like a child. My mother is a small woman. I was 10 at the time but even at that young age, I was close to being her height. For such a fragile woman, her strength was that of ten men. It was as though a second source of power was imbued in her — I think her love and devotion for us gave her this immense strength, both physically and mentally.

For such a fragile woman, her strength was that of ten men. It was as though a second source of power was imbued in her — I think [it was] her love and devotion for us…

I was embarrassed, of course, but I felt nothing but pure love. And she certainly berated me for being so mischievous and causing her grief — as I deserved. All the same, she tended to my recovery as if she were the one who was hurt. Mothers tend to that.

Cherish your mother every day of the year

Now, I’m not a particular fan of Mother’s Day, mainly because I don’t think we should only celebrate our mothers once a year (or even twice a year, if you count birthdays). But if you think about it, our mothers never stop being our mothers, do they? No matter how old you are, you’re still her baby.

For a person whose life is so intertwined with and dedicated to yours, appreciation and love need to be expressed throughout the year.

So if your mom is around now, go give her a hug and let her know how much you love her. Now and then, remind her of that love, not just on Mother’s Day, but on any regular day of the year. That’s the best gift a mother can ask for.

Our mothers, they, above all else, are the true heroes we must celebrate.