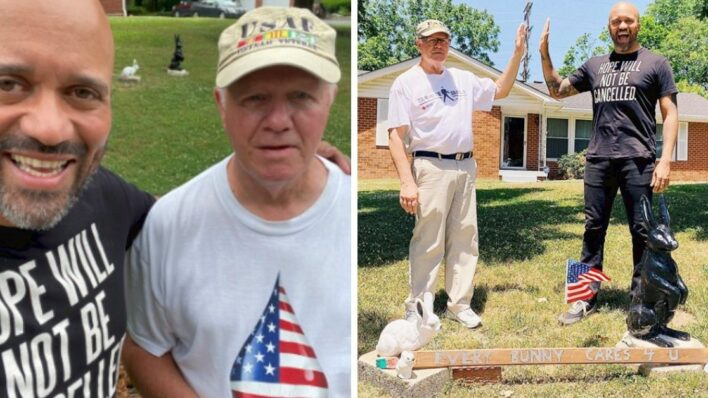 For 4 Years, He Thought His Neighbor Ignored Him Because Of How He Looked–Turns Out He Had It All Wrong

Carlos Whittaker assumed his neighbor did not like him because of his ethnicity. He was proven wrong in their first conversation in 4 years.
By Kawter    June 10, 2020

Carlos Whittaker assumed his neighbor did not like him because of his ethnicity. He was proven wrong in their first conversation in 4 years.

Unity first comes at the family level but neighbors are integral to our lives. A good community consists of people who are there for each other, no matter what happens. Whether you need someone to watch over your cat or alert you when something fishy happens on your street, good neighbours are always there for you.

On the other hand, sometimes we just don’t bond with some neighbors. The reason isn’t always deep: personalities just don’t match or they tend to be noisy and careless about how they affect the people who live with them.

In some other instances, prejudice and discrimination can be the cause. This is the case for Carlos Whittaker, whose 70-year old neighbor had not addressed a single word to him–until everything changed.

His neighbor never acknowledged him in 4 years

Carlos’ neighbor, a 70-year old man with 2 white porcelain bunnies on his yard, had always ignored him.

“In 4 years, he’s never said a word to me. I’ve tried smiling and waving. But no luck. I figured he probably doesn’t like people that look like me. We all have bias and this is mine,” Carlos revealed in a touching video.

Then, Carlos saw the old man walk out of his house, a can of paint in his hand. He bent down in front of the his 2 white porcelain bunnies and proceeded to paint them in black.

“He proceeds to kneel down in front of one of the bunnies and opens up the can of paint. He dips the paintbrush in the can and begins to slowly and carefully paint the white bunny…Black,” Carlos wrote on Instagram.

He had assumed the wrong thing

“For the next 12 hours I was trying to come up with 1000 other reasons why he painted that bunny black,” Carlos said.

He then decided to approach the old man and said “I don’t think I’ve ever had a conversation with you.” The old man funnily replied, “I’ve only lived here since 1964.”

But Carlos wanted to know why he had painted one of his bunnies in black. So he asked him. And the old man’s answer was one he did not expect.

The old man replied that with “what’s going on in this country” he wanted to “gently” contribute to a message of love and unity, hence why he painted one of his bunnies in black.

“I started to cry,” Carlos confessed to his neighbor.

“And there is this thing called racial bias that I’m trying to have my friends understand that they have,” Carlos continued. “Whereas someone like me that travels sometimes for a living will normally have a bias that says ‘Oh look, this is an older white gentleman with an American flag upon his door…That my bias automatically says ‘He may not like me.'”

And I just wanted to tell you that I am so grateful and that I apologize if I ever assumed anything. Because, that’s one of the most beautiful things that I’ve ever seen.

His neighbor revealed a story from his past

Seventy years on this earth is a long time. And back in the old man’s childhood, society was even less kind to black people and others who looked different. His old neighbor lived through that time, but he revealed that he never made a difference between black or white.

“When I was growing up, for some reason my mother had a black lady to keep the house up…laundry, food, cooking, raised me and all that stuff. And she was a black lady, she was a servant. She taught me how to do everything. And I never felt any indifference for her being black.”

A new friendship and a new hope

Carlos and his new friend spent three hours with national outlets sharing the story of their new, unlikely friendship. And what he wants us to know, is that we can all be fooled by our own biases. You never know

“This is the hard work it’s going to take friends. Uncomfortable conversations. Admitting our own bias,” He said. “Calling in out in our small circles of friends. So I need you all to call out the bias in your own hearts…Apologize to who you need to apologize to…And let’s get this party started. Do the heart work.”

Protests may change policy. But conversations change communities. They are both vital. Now go do your part.