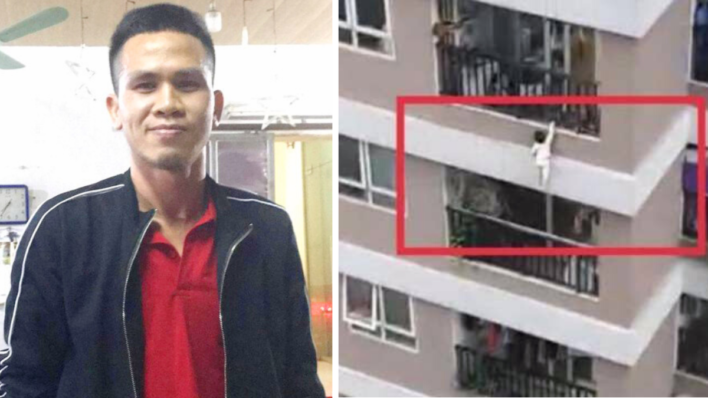 Nguyen Ngoc Manh, 31, from Hanoi, Vietnam, was sitting in his truck waiting to deliver a package when he heard a child crying and a woman’s scream. At first, he did not think much of it, but when he looked up through the window of his truck, he saw a child hanging from the 12th floor balcony.

Manh, who is a father himself, acted quickly and jumped over a six foot wall to get on a metallic roof the child would potentially hit. As the little girl lost her grip and fell, Manh dove in to catch her. He fell so hard that he created a dent on the roof. The girl didn’t cry, but she had bit her tongue and blood was dripping from her mouth.

The child was immediately taken to the National Children’s hospital. The doctors said she had dislocated her hip and Manh had suffered a minor sprain in his arm.

I scaled the wall and saw that she could fall onto the metallic roof of the house used to store electric generators for the complex, so I tried to climb on top of it. I made it, but couldn’t stand firmly, as the roof was crooked.

The nearby security camera recorded Manh’s courageous act which went viral with everyone appreciating his kind and brave heart. The father of the child thanked him profusely and the Hanoi authorities recognized Manh with a certificate of merit for his heroic act.

Manh confessed that he immediately left the scene after he had saved the little girl without waiting for any praise or recognition. He said he was just happy to have done something meaningful.

After saving the girl, I left without leaving a phone number, though the girl’s family managed to contact me anyway to inform me of the girl’s health status.

When interviewed, he humbly denied being a “hero” and said that he did what anyone would have done. He went on to say that he felt relieved and at peace only when he came back home to his child, who was of similar age to the girl whose life he had saved.

Sometimes, we don’t have to read a book or watch a movie to see a “superhero.” Often, they are amongst us, living a life just like any of us, but nurturing a brave heart and extraordinary capabilities in times of need.

Manh’s humble heart not only earned him immense admiration and respect from everyone, but also solidified our trust in humanity that people can perform incredible things without any expectation of reward.

Not all heroes wear capes
“The true courage of the hero is to forget the rank he has attained by his courage.”- Stanisław Leszczyński
Tags
Share
← Prev Post Next Post →