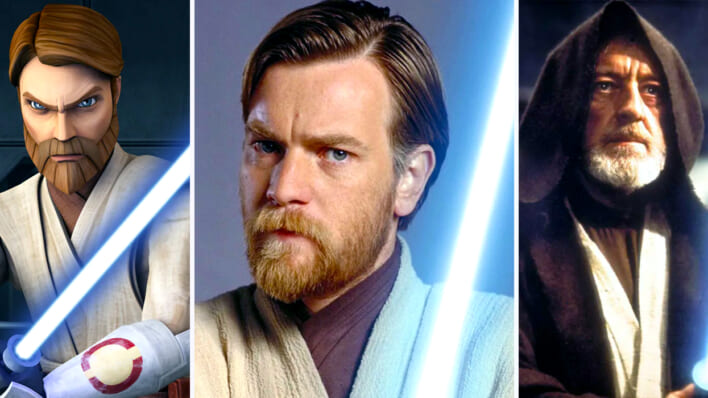 Obi-Wan Kenobi is not only a Jedi Master, he’s also a master with words, responsible for some of the best quotes in Star Wars.
By Kevin Melrose    May 25, 2022

Obi-Wan Kenobi is not only a Jedi Master, he’s also a master with words, responsible for some of the best quotes in Star Wars.

Obi-Wan Kenobi is second only to Yoda in Star Wars when it comes to imparting words of wisdom. He served as mentor in the hero’s journey of both Anakin Skywalker and Luke Skywalker, and even continued in that role beyond death. While we can debate whether the Jedi Master failed Anakin, there’s little arguing he left the galaxy with an abundance of memorable Obi-Wan Kenobi quotes.

No, not the old standby, “Use the Force, Luke,” or the ever-memeable “Hello there!” We’re talking about the quotes, from across movies, television and comics, that provide lessons applicable to daily life. Here are 12 of the best from the legendary Jedi.

“In my experience, there is no such thing as luck.”

Belief versus skepticism, represented by Obi-Wan Kenobi and Han Solo, is an underlying theme of Star Wars: A New Hope. And while this Kenobi quote is in regard to the part the Force may have played in Luke Skywalker’s lightsaber training, it’s applicable outside of the galaxy far, far away.

RELATED: The Most Motivational Star Wars Quotes from a Galaxy Far, Far Away

It’s a reminder of the role of hard work in our achievements. Han may not be completely wrong; there’s something to be said for “right place, right time.” But attributing success to luck discounts months, or years, of experience.

“We must persevere. And in time, a new hope will emerge.”

Full quote: “This is Master Obi-Wan Kenobi. I regret to report that both our Jedi Order and the Republic have fallen, with the dark shadow of the Empire rising to take their place. This message is a warning and a reminder for any surviving Jedi. Trust in the Force. Do not return to the Temple. That time has passed. And our future is uncertain. We will each be challenged. Our trust… our faith… our friendships. But we must persevere. And in time, a new hope will emerge. May the Force be with you, always.” Obi-Wan, Star Wars Rebels

Obi-Wan recorded a message following the siege of the Jedi Temple in Star Wars: Revenge of the Sith, warning members of the order against returning to Coruscant. Broadcast across the galaxy, the beacon achieved its purpose.

However, its secondary message, of hope and determination, lived past the fall of the Republic, to inspire a new generation of heroes: the crew of the Ghost from Star Wars Rebels.

“Many of the truths we cling to depend greatly on our own point of view.”

Full quote: “Luke, you’re going to find that many of the truths we cling to depend greatly on our own point of view.” Obi-Wan, Star Wars: Return of the Jedi

Obi-Wan plays fast and loose with the truth in A New Hope regarding the fate of Anakin Skywalker. When finally confronted in Return of the Jedi with the revelation that Darth Vader is Luke’s father, Obi-Wan uses “from a certain point of view” to rationalize his actions.

The Kenobi quote may be self-serving, but it highlights that our preconceptions can influence what we accept to be true.

“Be mindful of your thoughts, Anakin, they betray you.”

Emotional and impetuous, Anakin Skywalker wasn’t exactly the pupil Obi-Wan Kenobi bargained for. And the Padawan’s fixation on Padme Amidala was only the beginning. In 2002’s Star Wars: Attack of the Clones, the two Jedi are assigned to guard Senator Amidala, but Anakin’s mind swiftly wanders to the “intoxicating” young woman.

This remark is about Anakin’s commitment to the Jedi Order, and its prohibition against forming attachments. However, like so many Kenobi quotes, it can be applied to everyday life. It’s a reminder to remain focused on the task at hand, whether that’s meeting a deadline or protecting a politician from another planet.

In the Star Wars: The Clone Wars Season 1 episode, “Mystery of a Thousand Moons,” Obi-Wan and Anakin have just 48 hours to find the antidote to a deadly virus. When Anakin insists on charging into action, his Jedi Master cautions him to “slow down,” and says, “A great leap forward often requires taking two steps back.”

Anakin promptly replies, “And sometimes all it requires is the will to jump.” However, the Obi-Wan Kenobi quote is a good reminder to take a moment to reassess the problem, and then consider the best choice of action.

“Who is more foolish? The fool or the fool who follows him?”

The back and forth between Obi-Wan Kenobi and Han Solo in Star Wars: A New Hope is responsible for another gem of a quote. With the Millennium Falcon trapped on the Death Star, Obi-Wan proposes disabling the space station’s tractor beam to give the ship a chance of escape. In response, Han labels the Jedi Master a “damn fool.”

Obi-Wan’s humorous retort is a rhetorical, if stinging, question. However, it hits upon something parents have asked for untold generations: “If your friends jumped off a bridge, would you?”

Of course, in Star Wars, the ragtag group of heroes has little choice but to follow “the fool” if they have any hope of escaping the Galactic Empire.

Full quote: “War tends to distort our point of view. If we sacrifice our code, even for victory, we may lose that which is important for our honor.” – Obi-Wan, Star Wars: The Clone Wars

Few episodes of Star Wars: The Clone Wars better highlight the difference between Anakin Skywalker and Obi-Wan Kenobi than Season 3’s “Citadel Rescue.” The two are tasked with freeing Jedi Master Even Piell and Captain Tarkin from a Separatist prison so they may deliver secret information to the Republic.

When Obi-Wan expresses skepticism about Tarkin’s gung-ho attitude, Anakin says, “I think we need people like him. This is a war. If we aren’t willing to do what it takes to win, we risk losing everything we try to protect.”

Obi-Wan’s response emphasizes that we shouldn’t abandon our principles, no matter how difficult the circumstances become.

“Only a Sith deals in absolutes.”

Star Wars fans have long pointed out that this Obi-Wan Kenobi quote is, itself, an absolute. However, if we overlook the contradiction, there’s plenty to learn from the Jedi’s words of wisdom.

The line arrives in Star Wars: Revenge of the Sith just before his iconic lightsaber duel with Anakin Skywalker, the newly anointed Darth Vader. Having slaughtered the younglings at the Jedi Temple, Anakin has seemingly passed the point of no return. But Obi-Wan clings to hope, despite Anakin’s declaration, “If you’re not with me, you’re my enemy.”

Obi-Wan’s point is that viewing the world in black and white leaves no room for uncertainty or change. Such rigid, and narcissistic, thinking can force someone into taking extreme actions, with no acknowledgement that a middle ground might exist.

“Skill is the child of patience.”

Full quote: “It’s all right, Anakin. Not all Force abilities come easily to everyone. This is why we study, why we learn. Skill is the child of patience.” – Obi-Wan, Star Wars: Obi-Wan & Anakin

If there’s a single thread that runs through the teachings of Obi-Wan Kenobi and Yoda, it’s patience. That quality is in short supply, in the Star Wars galaxy, and in our world. That becomes evident again in the 2016 Marvel Comics miniseries Star Wars: Obi-Wan & Anakin, set three years after the events of The Phantom Menace.

In the second issue, by Charles Soule and Marco Checchetto, a frustrated 12-year-old Anakin struggles to master his own emotions even as he tries to calm a beast at the Jedi Temple. Obi-Wan’s reassuring response is to urge patience and practice, neither of which comes easy to his Padawan.

“It takes strength to resist the dark side. Only the weak embrace it.”

Full quote: “You can kill me, but you will never destroy me. It takes strength to resist the dark side. Only the weak embrace it.” – Obi-Wan, Star Wars: The Clone Wars

Strip away the uniquely Star Wars trappings of “the dark side,” and we’re left with a powerful quote about moral strength, and what it takes to avoid giving in to hatred.

In The Clone Wars Season 5 episode “The Lawless,” Maul lures Obi-Wan Kenobi into a trap on Mandalore. The Jedi is forced to witness the murder of Duchess Satine, his love interest, as the former Sith Lord taunts him about the power of the dark side.

Despite Maul’s actions, Obi-Wan never succumbs to his anger. The same can’t be said for Maul, who suffers defeat at the hands of his former master, Darth Sidious.

“There should be a star here, but there isn’t.”

Full quote: “This is where it ought to be, but it isn’t. Gravity is pulling all the stars in this area inward to this spot. There should be a star here, but there isn’t.” – Obi-Wan, Star Wars: Attack of the Clones

The other Obi-Wan Kenobi quotes involve the Jedi imparting wisdom. However, in this instance, he learns a lesson himself, with help from Master Yoda and some younglings.

In Star Wars: Attack of the Clones, Obi-Wan is puzzled when he finds no evidence of the planet Kamino in the Jedi archives. The answer is obvious, at least to the children: Someone deleted the information. “Truly wonderful, the mind of a child is,” Yoda marvels. “Uncluttered.”

That lesson goes hand in hand with Obi-Wan’s instruction to Luke in A New Hope, “Your eyes can deceive you; don’t trust them.” In the instance of the missing planet, the answer wasn’t to rely upon the Force, but, rather, logic.

“If you define yourself by the power to take life, then you have nothing.”

Full Quote: ‘If you define yourself by the power to take life, the desire to dominate, to possess … then you have nothing.’ – Obi-Wan, Star Wars Rebels

Set two years before the events of A New Hope, the Star Wars Rebels Season 3 episode “Twin Suns” depicts the final meeting between Obi-Wan and his old adversary, Maul. They’re both vastly different from the warriors who first met in Star Wars: The Phantom Menace. Maul views the aging Jedi with disdain, and wonders whether it’s better to kill him or leave him in “squalor” on Tatooine.

However, as Maul soon realizes, Obi-Wan has a noble purpose that makes solitary life bearable in this unforgiving desert. Unlike Maul, he doesn’t seek power or revenge. Obi-Wan’s objective is to serve the greater good, by watching over the young Luke Skywalker.

The ‘Star Wars Kid’ Strikes Back: How a Viral Victim Became an Anti-Bullying Hero