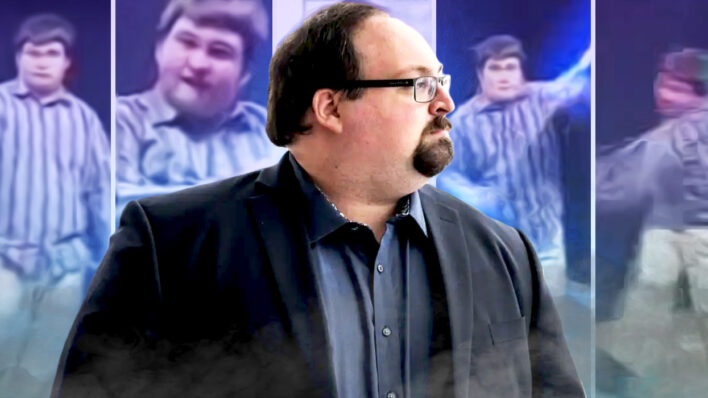 The ‘Star Wars Kid’ Strikes Back: How a Viral Victim Became an Anti-Bullying Hero

The subject of an infamously viral meme and dubbed disparagingly “The Star Wars Kid,” Ghyslain Raza suffered horrible bullying for his starring role in the video. Twenty years later, he is striking back against toxic internet culture.
By Kevin Melrose    May 4, 2022

The subject of an infamously viral meme and dubbed disparagingly “The Star Wars Kid,” Ghyslain Raza suffered horrible bullying for his starring role in the video. Twenty years later, he is striking back against toxic internet culture.

Before TikTok, YouTube or even Facebook, there was “Star Wars Kid,” perhaps the internet’s first viral-video sensation. However, unlike today’s TikTokkers, 14-year-old Ghyslain Raza didn’t seek online fame. It found him… and then made his life unbearable.

Nearly 20 years later, Raza has taken control of the narrative, as the subject of Star Wars Kid: The Rise of the Digital Shadows. Mathieu Fournier’s documentary goes beyond the birth of the video to examine it for what it was: one of the earliest, and most egregious, examples of cyberbullying.

RELATED: The Best Quotes From Yoda About Fear, Patience and Knowledge

Today, social media platforms have safeguards in place to identify and discourage (if not necessarily prevent) harassment. As such, it’s difficult to imagine a video like “Star Wars Kid” lasting long as commenters line up to mock the actions of an awkward teenager. However, those rules didn’t apply in the relative Wild West of the internet in 2003, when some went so far as to encourage Raza to commit suicide.

Here’s how the notorious “Star Wars Kid” video came to be, what happened next, and how its star overcame unwanted fame to become an anti-bullying hero.

The Secret Origin of the ‘Star Wars Kid’ Video

The term “Star Wars Kid” requires little elaboration, which speaks to the pervasiveness of the 2002 video. Even those unfamiliar with the original footage of Raza clumsily wielding a golf-ball retriever like a lightsaber have undoubtedly seen parodies of it, on Arrested Development, South Park or The Office.

However, there are at least two things to remember at this point: The video was never intended to be seen by anyone; and “Star Wars Kid” wasn’t coined by Raza, who wasn’t a fan of the franchise, but by a blogger who helped to disseminate the footage.

RELATED: The Most Motivational Star Wars Quotes From a Galaxy Far, Far Away

Then a ninth-grade student at le Séminaire Saint Joseph in Trois-Rivieres, Quebec, Raza was enlisted to help a classmate create a video that parodied popular films, including Star Wars. The 15-year-old added glowing effects to the golf-ball retrievers used by the student actors as lightsabers, but wasn’t happy with the results. Raza then stepped in front of the camera on Nov. 2, 2002, hoping slower movements might record better. A few fruitless attempts later, the teen gave up and, in his words, decided “to vent some steam” in a final take.

Less than five months later, those carefree two minutes would be immortalized online as “Star Wars Kid.” “That’s when that famous video was created,” Raza recalled to CBC’s The Current.

He left the tape on the shelf of the school’s television studio, where it remained until April 2003, when it was discovered by another student, Jérôme Laflamme. He showed the footage to a friend, who converted the video to a digital file. It was then passed among classmates before one of them uploaded it to the internet. The rest, as they say, is online history.

The Damage Caused by the ‘Star Wars Kid’ Video

“Star Wars Kid” wasn’t a literal overnight sensation. In an age of peer-to-peer networks, it took about two weeks for the clip to attract attention. But when it did, it caught fire. One website reported 1.1 million downloads within a month (remember, this was before YouTube).

Mainstream media outlets took notice; reporters showed up at Raza’s home. At his high school, he was greeted by chants of “Star Wars!” He was even recognized in public.

RELATED: Darth Vader Quotes: The Power of the Dark Side

“It was simply unbearable, totally. It was impossible to attend class,” Raza said in a deposition stemming from a 2003 lawsuit filed against the families of three classmates who played a role in spreading the video. (The suit was settled out of court in 2006, for an undisclosed sum.) Raza was diagnosed with depression. What’s more, he was asked not to return to school the following year, because of negative publicity.

Reaction online was even worse. The mockery grew so bad that bloggers Andy Baio, who named the video “Star Wars Kid,” and Jish Mukerji organized a fundraiser that generated $1,000 in donations to buy Raza an Apple iPod.

“If I knew what I know now, I never would have posted it,” Baio said in the new documentary, Star Wars: The Rise of the Digital Shadows. “I can’t diminish it. I provided a place for people to watch it in that initial spread. I have enormous regret about posting the video.”

The Return of the Star Wars Kid

Raza made peace with “Star Wars Kid” a long time ago. He first stepped forward in a 2013 interview to share his experience as “one of the earliest and highest-profile victims of a massive cyberbullying attack.

“No matter how hard I tried to ignore people telling me to commit suicide,” he recalled to MacLean’s. “I couldn’t help but feel worthless, like my life wasn’t worth living.”

That was then. Now, Raza is a graduate of McGill’s law school who’s pursuing a doctorate from Queen’s University. For the documentary, he returned to his old high school to talk with students about their online presence, and what happened to him.

“You don’t have to accept to be defined by something like that,” Raza told CTV News. “I may have a digital shadow that’s perhaps a little bit larger than most, but everyone these days has a digital shadow, and when it comes to identity — online versus reality — this brings new issues we didn’t have 20 years ago. At the end of the day it’s about not accepting to be defined by something like that.”

Star Wars Kid: The Rise of the Digital Shadows can be viewed on the National Film Board of Canada website.