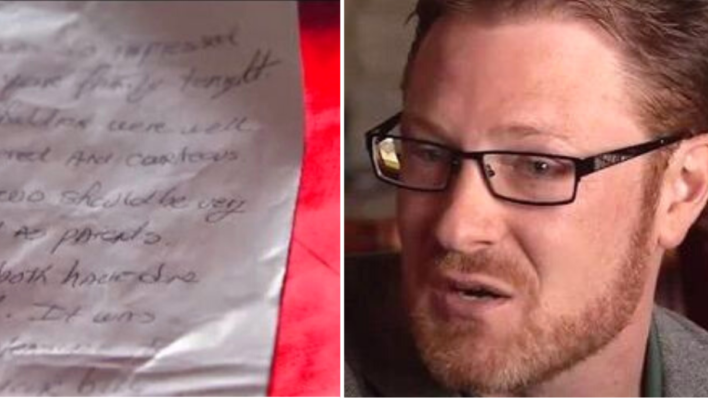 Parenting is tough, so when one mother and father were complimented on their skills, the couple was elated.
By Sophie Tolias    May 15, 2022

Parenting is tough, so when one mother and father were complimented on their skills, the couple was elated.

Maggie and Ryan Bokrost from Woodlands, Texas, were enjoying dinner with their five children, aged 4 to 14, at Rico’s Hacienda when a stranger surprised them.

When Ryan asked for the bill, he received a note instead.

The waiter brought me the little booklet with the note in it. I was speechless and not quite sure what was going on.

Upon reading the unsigned note, the dad discovered that a stranger had paid the entire bill. The reason why, which the letter outlined, was even more touching than the gifted dinner.

RELATED: Struggling Family Loses their Last $600 in a Scam – Then, a Stranger Steps in and Changes Everything

In the note, the individual explained that they chose to settle the check because they admired the well-mannered nature of their children. They let Maggie and Ryan know that they should be proud of how they’ve raised their kids.

Your family is truly a breath of fresh air in the days of children screaming and running around. Have a blessed day and week.

The anonymous person wrote in the letter

Ryan said he and his wife just try to teach their kids to behave, especially in public. Parenting is hard, but whatever they’re doing it seems to be working. And it was very kind for the stranger to appreciate their effort.

Don’t forget to tell, or show, people that they’re doing a great job.