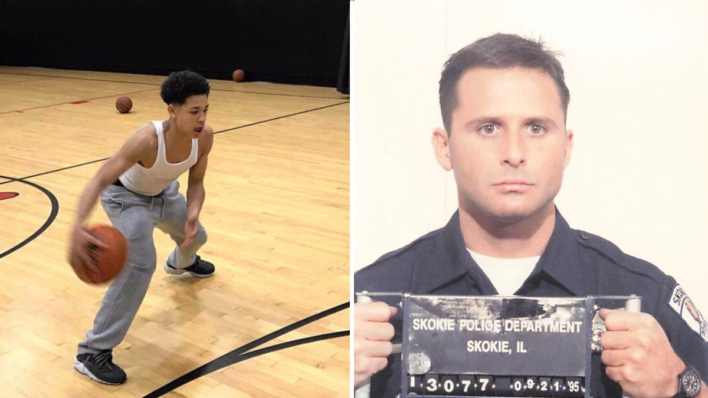 Instead of punishing the boy, one Skokie Police Officer helped him do what he loved.
By Lindsey Staub    August 24, 2022

Instead of punishing the boy, one Skokie Police Officer helped him do what he loved.

Trespassing often results in the damage of property or vandalism, but in this case, one boy just wanted to play basketball.

Justin Pritchett worked at a gym in Chicago, the same gym where teen Vincent Gonzales used to be a member. However, his membership had expired, yet he was still sneaking into the facility’s basketball court.

What a Police Officer Did When He Saw a Teenage Trespasser

Not only was Gonzales no longer a member, but he also needed a guardian’s permission before using the gym.

Pritchett caught Gonzales twice, and he gave a verbal warning both times. However, Gonzales wasn’t deterred and continued to show up on the court. The staff even printed out Gonzales’s expired membership card so anyone working could identify Gonzales if he showed up.

“I felt for the kid. He really did just want to play basketball, but it was a policy enforcement issue more than anything,” Pritchett told ABC News. “I said, ‘If you sneak in again, I’ll have to call the cops.’”

Pritchett was finally forced to call the police when Gonzales showed up again, but he did it just to scare the boy.

Luckily, it wasn’t just any cop, but Officer Mario Valenti who responded to the call and Pritchett described the situation inside the gym.

“Officer Valenti approached him with a stern and authoritative demeanor and said, ‘Hey kid, you know you can’t be in here, man, grab your stuff,’” Pritchett said.

But Valenti didn’t cuff Gonzales or even escort him out. Instead, he pulled out his personal debit card and passed it to Pritchett. He asked Pritchett to charge his card $150 and to give whatever plan that money bought to Gonzales.

“He immediately took the initiative of the helping route — instead of doing just his job and doing the right thing, he did the better thing,” Pritchett said.

How One Police Officer’s Kindness Led to a Domino Effect

After more than two decades as a police officer, Valenti knew how to “size people up,” and when he looked at Gonzales, he saw “a gentle type of kid.”

Using the $150 and shouldering the rest of the cost, the gym provided Gonzales with a two-year all-inclusive gym membership. All Gonzales had to do was get a waiver signed by his guardians.

When news spread about what the kind officer did for a local teenager, the department received a lot of praise.

RELATED: Police Officer Sees a Homeless Man with a Blade – And Helps Him Get a Job

“The reaction to this whole case and outpour of public sentiment has been great and really appreciated,” Skokie Police Public Information Officer Eric Swaback said. “Positive stories and these kinds of things happen daily, but they just don’t always get reported. We don’t look for notoriety. We’re just doing our jobs.”

The department hasn’t stopped there: It joined X-Sports to create a program that would help sponsor others in the community to do good deeds.

Not all who do something wrong are bad — sometimes they just need more help. Valenti knew this, which is why he aided Gonzales instead of punishing him. Valenti’s compassion has continued to set off a chain reaction of kind acts, allowing the citizens of Chicago to spread more generosity in their community.

LEND A HAND
“The purpose of life is not to be happy. It is to be useful, to be honorable, to be compassionate, to have it make some difference that you have lived and lived well.” ― Ralph Waldo Emerson
Tags
Share
← Prev Post Next Post →