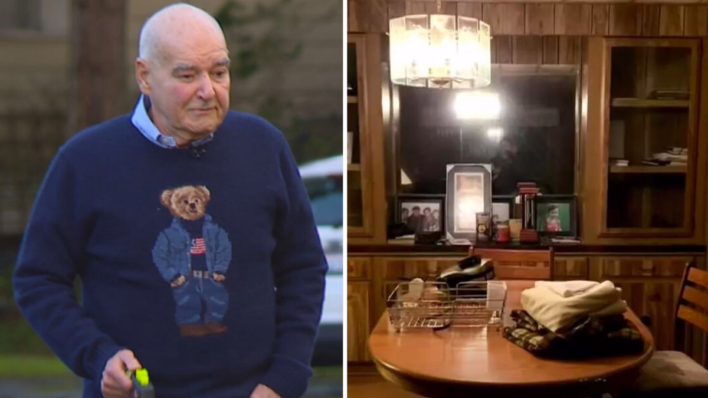 One Washington officer refused to let another resident live in squalor.
By Lindsey Staub    June 20, 2022

One Washington officer refused to let another resident live in squalor.

What goes around comes around, be it a boomerang, karma, or a helping hand.

Lewis Harris had done more than his fair share for his country. As a soldier in the United States army, he fought for his country and protected its citizens. But now, as a veteran in his 80s, he needed some help in return.

Thankfully, his community in Washington were quick to offer a hand.

What a Police Officer Saw at an Elderly Veteran’s House

Harris lived alone, and the feelings of isolation ate away at him. Not only that, but his household in Redmond was falling apart. He needed help, but he didn’t want to ask for it.

“I definitely don’t want to be a burden to anyone,” he told King5 News.

When his health started to decline, he finally began reaching out for assistance.

It started in the grocery store, where Harris had been running errands. He couldn’t remember the way home, so he asked a clerk. Wanting to help, the clerk called the police.

Officer Nazariya showed up to the store to help Harris home, but his help wouldn’t stop there.

At the grocery store, Officer Nazariya talked to Harris about what had happened. Harris explained that he could not remember the route home and that he couldn’t see.

Officer Nazariya decided then and there to help restore Harris’s home, and he knew the perfect person to help: his wife, who just happened to be an interior decorator.

How an Entire Community Came Together to Help an Elderly Veteran

Before long, the entire community began to get involved. Other businesses who had heard Harris’s story donated supplies and extra hands. Because of all their hard work, Harris’s decaying house turned into his dream home.

Complete with quartz countertops and a gallery wall dedicated to his military service, Harris’s house was truly transformed.

Harris’s first time seeing his new residence was emotional. So moved by his community’s dedication, Harris promised to pass it on.

RELATED: Former Police Officer Fired For Saving A Life On Duty Gets Vindication

“It almost brought me to tears, okay. I had a couple of drops there, it really touched my heart and my soul,” he said. “There’s nothing I can do to ever repay them other than just be a good American and try to help other people.”

Harris, Officer Nazariya, and the Redmond community continuously dedicated their time and effort to those around them. Whether by laying down your life for your country, walking an elderly man home, or helping build a new life for a neighbor, these people helped wherever and whenever they could.