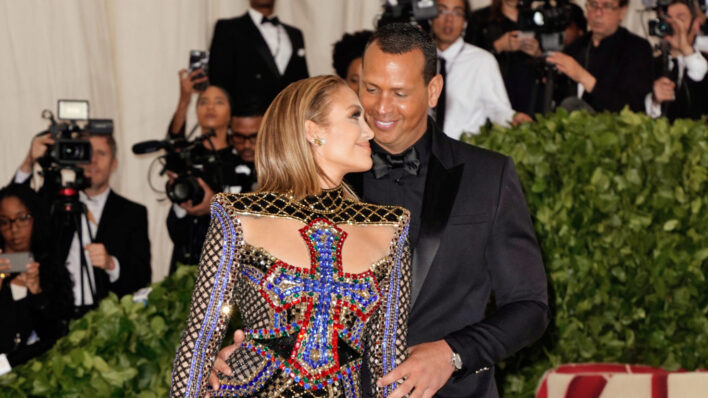 NEW YORK, NY - MAY 07: Jennifer Lopez and Alex Rodriguez at Metropolitan Museum of Art on May 7, 2018 in New York City. (Photo by Jackson Lee/Getty Images)

Welcome to #RelationshipGoals, where we’re giving the stage to the power couples we admire. From admirable long-term relationships to inspirational
By Matt Valentine    December 20, 2018

In 2005, pop superstar and entrepreneur Jennifer Lopez and then husband Marc Anthony attended a Subway Series game at Yankee Stadium in New York.

When she posed with the Yankees superstar third baseman Alex Rodriguez (then married), she — nor he — had any idea how they’d eventually hit it off more than a decade later.

That was the beginning of A-Rod and J-Lo.

Why A-Rod and J-Lo are a true power couple

“I describe it as the luckiest day of my life,” Rodriguez said in an interview with Ellen.

Lopez tapped Rodriguez on the shoulder one ordinary day in 2017 (as ordinary as a day is for a baseball legend) when she spotted him looking for his car after he had just left a meeting in L.A.

He hesitated for a moment, unsure of who had approached him, Lopez donning curly hair and in plain clothes.

“‘Oh my god, Jennifer, you look beautiful,'” he recalled telling Lopez. “I was so embarrassed and then I got a little nervous…And she says, ‘You have my number, reach out.’ And I went home that night and reached out.”

Part of what makes the pairing of A-Rod and J-Lo special is their shared beginnings. Each grew up in New York (A-Rod later moving to Florida), have become high-profile entrepreneurs and fitness fanatics (Lopez herself having first risen to stardom as a backup dancer on 90’s comedy show In Living Color and has a love of sports like A-Rod), and each has two children of similar ages whom they’re devoted to.

Many have referred to them as the male and female counterpart of the same person. However, there’s much more to their magic. Each has had a long and winding road they had to travel through to arrive at the point where they finally got together. And it’s these experiences, and the lessons that came with them (and their shared never-give-up attitude), that have helped them forge such a strong bond so quickly.

RELATED: 3 Subtle Differences Between a Twin Flame and a Life Partner

“We both entered the public eye in our early twenties and overachieved right from the start. And that affects every dynamic in your life, from your family to your work to your relationships. We have a similar makeup,” said Lopez in a recent interview with Bazaar.

One of the most inspiring aspects of A-Rod and J-Lo’s relationship is the shared devoted they have for their children, A-Rod with two daughters Natasha, 14, and Ella, 10, from his previous marriage with Cynthia Scurtis and J-Lo with 10-year-old twins Max and Emme from her previous marriage to Marc Anthony.

“Kids are so beautiful and open to love and new friends,” Lopez told PEOPLE. “I was so loving to his kids and he was so loving and accepting of mine, and they embraced each other right away. [It was as if] ‘I get a new bonus brother and sisters to hang out with all the time and it’s nice.’”

And A-Rod says, “Our kids have become best friends and that keeps us both grounded and appreciative. We couldn’t have asked for anything better than the four of them getting along as they do.”

“Jennifer’s an amazing person…She has like 10 jobs,” Rodriguez said in an interview with Nightline. “She loves sports, she’s an athlete herself, a great mother, great daughter, great friend.”

“It’s good, it’s healthy; we communicate well,” said Lopez to Bazaar. “We understand each other’s lives in a way that most other people couldn’t.”

Love is the priority, but not just love for one another, for those around them whom they love as well. A real relationship makes you and the people around you better and feel more loved and that’s the greatest sign of the power of their pairing.

On a recent trip to the Bahamas for J-Lo and A-Rod’s birthdays (which are just three days apart, go figure!), the couple enjoyed spending time with the entire family:

“…the day and night was filled with lots of laughter, tears and of course dancing…:)” Lopez captioned in a pic of her and Rodriguez kissing in front of a giant pink cake.

Alex popped the question in 2019 taking their relationship to the next level and cementing their love. The rest is truly history.