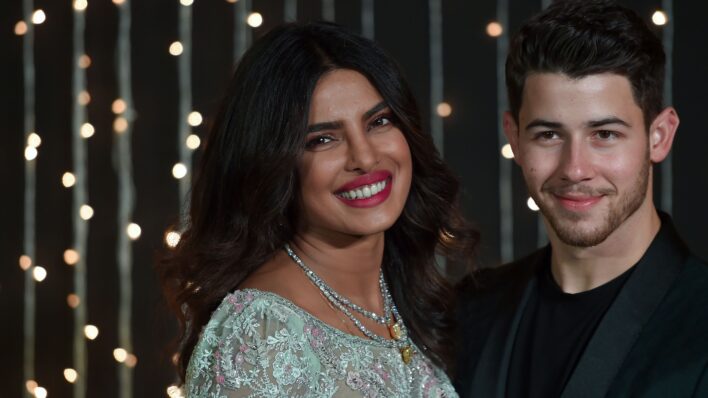 He was one part of the world-famous Jonas Brothers, now defunct and having ventured out on his own as an
By Matt Valentine    January 29, 2019

He was one part of the world-famous Jonas Brothers, now defunct and having ventured out on his own as an uber-successful solo act. She a Hollywood icon and one of the first ever Indian stars to cross over the pond and make it in the U.S.

But together, Nick Jonas and Priyanka Chopra would become something more: a union full of love and possibility that showed how two very different worlds can come together as one.

And, as they tell it, it all started with a text.

Why Nick Jonas and Priyanka Chopra are a true power couple

After sending a text to friend Graham Rogers (“Priyanka. Is. Wow.”), Chopra’s costar on her hit FBI drama Quantico, Jonas decided to work up the confidence to reach out to Chopra on Twitter.

“I’m hearing from a few mutual friends that we should meet,” he said.

“My team can read this. Why don’t you just text me,” replied Chopra.

From there, the spark was lit as the two began texting — “friendly with an eye toward flirtation,” according to Jonas.

Several months later, Nick approached Chopra when he spotted her at the 2017 Vanity Fair Oscars party.

“And I put my drink down, get on one knee—this is in front of a bunch of people—and I say, ‘You’re real. Where have you been all my life?’ Like, loud,” he told Vogue.

Three months later, the two would meet again at the Met Gala, where speculation would explode as they walked down the red carpet together. However, it’s what happened one week earlier that truly marked their blossoming relationship.

A week before the Met Gala, the two met together for a drink at the Carlyle hotel in New York — their first official date — where they hit it off.

Shortly after, Chopra invited Jonas back to her apartment, where her mother Madhu was watching Law & Order in her nightgown.

“We hung out for a couple of hours,” Chopra told Vogue. “He patted my back before he left.”

“There was no kiss. There was nothing…She’s still upset about that.” joked Jonas.

But the road to one another wouldn’t turn out to be so straightforward for these two megastars. Despite hitting it off then, it would be an entire year before Jonas and Chopra would see each other again.

Later that month, Nick invited Priyanka to a live performance of Beauty and the Beast, where the two met at Chateau Marmont. “She walks into the Chateau, and I feel an overwhelming sense of peace and understanding about this next chapter of my life,” Jonas told the magazine.

Chopra had her own turning point as well, the moment she realized that something special was brewing between the two.

While on a date in L.A. attending a Dodgers game, Jonas remarked, “I love the way you look at the world. I love the drive you have.” “As a girl, I’ve never had a guy tell me, ‘I like your ambition.’ It’s always been the opposite,” said Chopra.

The following morning after the game, Nick called his mom and told her he was going to marry Chopra.

Later that July, after the two had each met one another’s family– at Jonas’s cousin’s wedding in Atlantic City, New Jersey and Chopra’s family in Mumbai, India shortly thereafter — Jonas proposed while the two were on a birthday trip for Chopra in Crete.

“I got down on one knee, again, and I said: Will you make me the happiest man in the world and marry me?” said Jonas. The two were officially engaged one day after Chopra’s birthday on July 19th and ready to start the next chapter of their lives together.

It was such an incredible coming-together of two really ancient cultures and religions.

What really defines Nick and Priyanka’s relationship is their pure and honest love for one another. But it’s perhaps because of the different worlds that each came from that their union has inspired so many.

Upon announcement of their engagement, tabloids exploded. But aside from the typical media attention in the states, what garnered an even stronger response was media attention to the engagement in India, where Chopra is considered something far more than just a movie star and no less than an icon.

News of the engagement spread quickly and soon Jonas was given the nickname “National Jiju”, a play on the Hindi word jiju meaning “brother-in-law”.

One month later, the roka– a traditional Indian meeting of the families in anticipation of marriage– took place in India with Jonas’ parents in attendance.

“It was such an incredible coming-together of two really ancient cultures and religions,” said Chopra.

Not only did a Hindu priest offer blessings but Jonas’s father, a Christian pastor, offered prayers as well. Nick even recited Hindu prayers in traditional Sanskrit.

“The prayers are in Sanskrit. Even I can’t say them. But he did it in Sanskrit. The Indians were so impressed with their National Jiju,” said Chopra.

The attention on Nick Jonas and Priyanka Chopra’s relationship hasn’t been all positive, with critics questioning how quickly the two had become engaged among the more prominent criticisms, but the two didn’t let that slow them down one bit.

Chopra, for her part, doesn’t let that kind of criticism bother her, whose mother and father married ten days after meeting one another. “She’s like, ‘It’s in your genes,’ ” joked Chopra.

Nick and Priyanka are proof that love strikes when it wants and how it wants and it’s simply our job to move with it where it may go, allowing ourselves to fall into it with open arms.

And, even if that means a crossing of two very different worlds, love can offer a language that breaks those boundaries and shows us that we’re all much more alike than we often like to think. And, perhaps, love is the language that should guide us.

To cap off their incredible love story, Nick Jonas and Priyanka Chopra were married on December 1st of 2018 at the Taj Umaid Bhawan Palace in Jodhpur, India after months of extravagant wedding celebrations.

“I love that our wedding was a religious mash-up,” Chopra told People. “We took beautiful traditions that we both grew up with and personalized them in a way that made sense for us. It’s been incredible to find the commonalities between our beliefs and figuring out how to blend them in a respectful and meaningful way.”