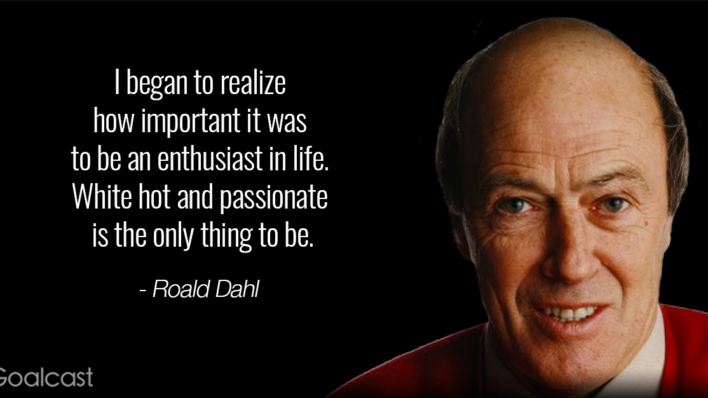 19 Brilliant Roald Dahl Quotes on Being an Enthusiast in Life

Roald Dahl was a writer of both children’s fiction and short stories for adults, widely known for novels like Charlie
By Flavia Medrut    August 24, 2018

Roald Dahl was a writer of both children’s fiction and short stories for adults, widely known for novels like Charlie and the Chocolate Factory and James and the Giant Peach.

Dahl wasn’t the kid who always dreamt about being a famous writer, he actually wanted to go straight to work after finishing school and travel to places like Africa and China. And he did. As soon as he graduated, he took a job with the Shell Oil Company in Tanganyika, Africa.

The author served as a fighter pilot during World War II and due to a serious head injury that he suffered in a plane crash he was sent to be an assistant air attaché in Washington D.C.. There, he discovered his talent for writing and started his flourishing career after publishing a short story called Shot Down Over Libya.

Dahl’s unique style and unexpected twists used in writing the stories for adults earned him three Edgar Allan Poe Awards. His children’s books, on the other hand, earned him popularity but have also become a subject of controversy as some didn’t agree with his darkly comic scenarios and sometimes gruesome violence. But Dahl knew his audience; he knew that children have a cruder sense of humor than adults, so he used that to create masterpieces.

Here are 19 Roald Dahl quotes to make you take chances and be an enthusiast in life. Never do anything by halves if you want to get away with it. Be outrageous. Go the whole hog. Make sure everything you do is so completely crazy it’s unbelievable I think probably kindness is my number one attribute in a human being. I’ll put it before any of the things like courage or bravery or generosity or anything else.

I’ve also learned that a real mouth-smile always has an eye-smile to go with it. So watch out, I say, when someone smiles at you but his eyes stay the same. It’s sure to be a phony.

And above all, watch with glittering eyes the whole world around you because the greatest secrets are always hidden in the most unlikely places. Those who don’t believe in magic will never find it. I began to realize how important it was to be an enthusiast in life. White hot and passionate is the only thing to be.

Having power is not nearly as important as what you choose to do with it.

So please, oh please, we beg, we pray, go throw your TV set away, and in its place you can install, a lovely bookshelf on the wall.

There is no life I know to compare with pure imagination. Living there, you’ll be free if you truly wish to be.

Don’t forget what happened to the man who suddenly got everything he wanted. He lived happily ever after.

A person who has good thoughts cannot ever be ugly.

There are a whole lot of things in this world of ours you haven’t started wondering about yet.

However small the chance might be of striking lucky, the chance is there. The chance had to be there.

If you are good, life is good. Somewhere inside all of us is the power to change the world.

It doesn’t matter who you are or what you look like as long as somebody loves you.

Human ‘beans’ is the only animals that is killing their own kind.

If you are going to get anywhere in life you have to read a lot of books.

You’ll never get anywhere if you go about what-iffing like that. Would Columbus have discovered America if he’d said ‘What if I sink on the way over? What if I meet pirates? What if I never come back?’ He wouldn’t even have started.

The more risks you allow children to take, the better they learn to take care of themselves. If you never let them take any risks, then I believe they become very prone to injury.