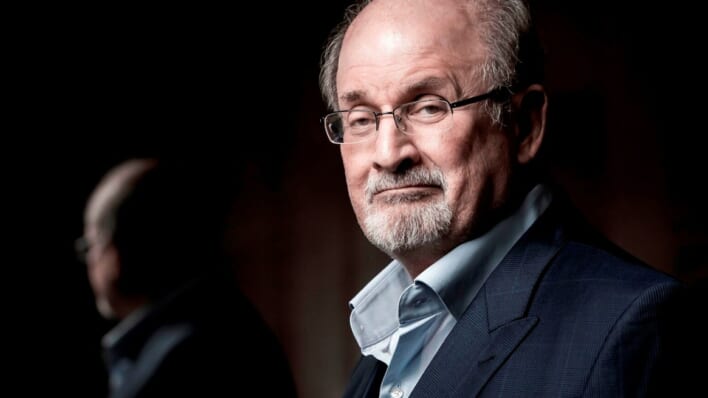 Salman Rushdie’s Attack Is a Terrifying Reminder about Censorship – Is There Any Hope?

Salman Rushdie is no stranger to death threats but after suffering a brutal attack while on stage in New York, the threat became real and life-threatening. With more instances of attacks on free speech, have we crossed a road we can’t come back from?
By Freyja Catton    August 26, 2022

Salman Rushdie is no stranger to death threats but after suffering a brutal attack while on stage in New York, the threat became real and life-threatening. With more instances of attacks on free speech, have we crossed a road we can’t come back from?

Salman Rushdie is recovering in a hospital after being repeatedly stabbed on stage in front of a New York audience on August 12, 2022. Relatives initially described the horrific attack as life-threatening and there is still a chance the famous author could lose an eye.

RELATED: Book Bans Are Targeting and Silencing One Group in Particular – But You Can Help

Rushdie has long been a champion of writers who have been attacked and demonized for their work. Very few discussions on censorship and freedom of speech occur without some reference to The Satanic Verses author who has spent three decades with a fatwa on his head.

Who Is Salman Rushdie?

Sir Salman Rushdie is an Indian-born British-American novelist. Born in Bombay (now Mumbai) to a Muslim family in 1947, Rushdie was sent to England at 14 years of age and later became a British citizen. He has been nominated for the Booker Prize seven times and won in 1981 with his second book, Midnight’s Children.

RELATED: 24 Most Inspirational Quotes From Your Favourite Authors

His fourth book, The Satanic Verses, was published in 1988. The novel is named after a series of verses that are claimed to have been omitted from the Quran because they were revealed by the devil instead of Gabriel. The novel was received with great attention and scrutiny, both becoming a best seller and infuriating the Islamic world.

The Satanic Verses was accused of blasphemy for its portrayal of Islam. It was banned in India, Pakistan, Iran, and other Muslim countries; protests and riots were so intense that the British government placed Rushdie under police protection. In protest of protection from the police, Iran broke off relations with the UK.

In 1989 the then-Iranian leader Ayatollah Ruhollah Khomeini issued a fatwa calling for Rushdie’s assassination, which led extremist groups to place a $3 million bounty on his head. Khomeini died the same year, but the Iranian State has historically supported the directive to assassinate the author until 1998. In 2012, a quasi-official Iranian religious foundation added another $500,000 to the reward.

Following Khomeini’s order to assassinate Rushdie, the term “fatwa” was introduced to the West, who then misunderstood the term to mean a “death sentence”.

Rushdie has continued to write novels and essays, including Haroun and the Sea of Stories (1990), Imaginary Homelands (1991), East, West (1994), The Moor’s Last Sign (1995), and The Ground Beneath Her Feet (1999). In 2007 he was knighted by the Queen for his services to literature, and in 2012 he published a memoir about his life in the wake of The Satanic Verses. His most recent book, Quichotte came out in 2019, and his next book, Victory City: A Novel is expected to be published in 2023.

Rushdie regularly speaks about censorship, free speech, and intellectual freedom. “To read a 600-page novel and then say that it has deeply offended you: well, you have done a lot of work to be offended,” Rushdie says.

What Happened to Salman Rushdie in New York?

On Friday, August 12, 2022, Rushdie, who now lives in the US, was preparing to give a lecture at Chautauqua Institution in western New York. There were 2,500 people in the audience. An assailant dressed in black with a black mask rushed from the audience to the stage without shouting anything and stabbed Rushdie at least 10 times.

The attack lasted about 20 seconds, and Rushdie fell as he was trying to get away from the attacker. He was flown to a hospital where he underwent surgery. The author’s agent, Andrew Wylie, reported that Rushdie was expected to recover but suffered from severed nerves in one arm, damage to his liver, and would likely lose an eye.

Investigations are still underway, but the assailant has been identified as Hadi Matar (24) of New Jersey. Matar pleaded not guilty to charges of attempted murder and assault, and authorities aren’t sure what motivated the attack yet. However, the attack is described as pre-planned, as Matar obtained an advance pass to the event and arrived a day early bearing a fake ID.

The news hit the media immediately. Iranian media has taken a celebratory tone to news of the attack, calling the attack “divine retribution,” while Western media is horrified. Authors and readers around the world have expressed dismay and disgust at the attack, and have sent support and well-wishes to the author and his family.

Western media is celebrating Rushdie’s courage and intelligence, and expressing gratitude for his support of other writers. Free expression and opinion should not be met with violence, and author Ian McEwan said the attack “represents an assault on freedom of thought and speech.”

McEwan went on to say, “Salman has been an inspirational defender of persecuted writers and journalists across the world. He is a fiery and generous spirit, a man of immense talent and courage and he will not be deterred.”

Rushdie’s injuries are life-changing, but thankfully he is expected to recover. After the attack on Friday, Rushdie went through hours of surgery and was on a ventilator. By Saturday (August 13), he was taken off the ventilator and able to talk to his family. His family reported on Sunday (Aug 14) that his defiant sense of humor remains.

What Does This Have to Do With Censorship?

While investigators are still determining the attacker’s motivation and connections, the overhanging fatwa is a heavy burden to bear. Given Rushdie’s long history with censorship and the nature of the event, it seems clear that he was attacked for his writing and advocacy for intellectual freedom.

While the value of freedom of speech and expression is enshrined in the US Constitution, this attack gives some unexpected weight to the power of freedom of expression. Other authors may be fearful of similar assassination attempts. JK Rowling of Harry Potter stardom has already received threats after coming out in support of Rushdie

“Cancel culture” has gained traction in recent years, and navigating intellectual freedom with social responsibility has become increasingly difficult for a lot of people. The news is increasingly polarized, with disinformation and extremism going mainstream. Our understanding of free speech seems all-encompassing, but social responsibility encourages consequences for our words.

Intellectual freedom is similar to freedom of speech, except that intellectual freedom refers to the right to access all information. Barring private/confidential information, of course, everyone has the right to read whatever books they want, listen to whatever music they want, etc. However, particularly when it comes to children, there are a lot of strong opinions about what books others should be allowed to read.

For many people, public and school libraries are the only way they can access this media. Collection budgets are limited and not every library can have every book, so libraries put consideration into which books are purchased. Some may disagree with the collection choice, and most libraries will have a process in place to allow patrons to “challenge” a book.

When a book is challenged, the patron submits a complaint to the library, detailing what issues they have. After the challenge is received, the complaint is reviewed by a committee. If the challenge is successful, the banned book may be removed from the collection.

The American Library Association (ALA) receives reports on “challenged books”, and tracks which books are challenged or banned throughout the year. These books are usually highlighted during the annual Banned Books Week, along with discussions on what intellectual freedom is, and the effect of censorship. The majority of book challenges occur in public libraries or at school libraries, and they have been increasing in recent years.

The ALA says that book bans and challenges have doubled in the last year and have reached the highest recorded number since the count started in 2000. In 2021 there were 729 book challenges challenging 1,597 titles. The most challenged books center on racism or sexuality and gender identity. Some conservative politicians have been leading this push for excessive book banning, but libraries have been pushing back.

Sometimes banning can be a good thing for the book, because it attracts attention and incites conversations. Many of the books that were banned historically have become literary classics that are still taught in modern classrooms.

As Rushdie says, “What is freedom of expression? Without the freedom to offend, it ceases to exist.”

Rushdie received well-wishes from authors and free speech proponents around the world. He spent his career campaigning for freedom of speech and expression, and he’s also a long-time supporter of other writers.

Since the attack, his books have skyrocketed on bestseller lists. People want to know who he is, and why his books generated so much controversy and attention. Hundreds of authors and fans are reading from Rushdie’s work as a show of solidarity by using the hashtag #StandWithSalman.

While we are in an age of questionable censorship, there are still many out there fighting for free societies, and the ability for open and sane dialogues, even when in disagreement.

In the meantime, now is a good time to re-evaluate the relationship between intellectual freedom and our own beliefs. “Free societies…are societies in motion, and with motion comes tension, dissent, friction. Free people strike sparks, and those sparks are the best evidence of freedom’s existence.”