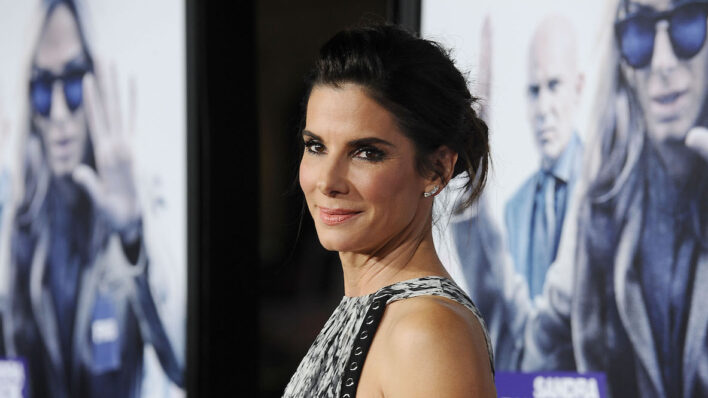 Sandra Bullock thought she had found love with Jesse James. When she won her first Oscar, she unfortunately was hit with the shocking news of his infidelity. But always the fighter, Sandra picked up the pieces and moved on to her happily ever after.
By Shaoni Das    April 7, 2020

Sandra Bullock thought she had found love with Jesse James. When she won her first Oscar, she unfortunately was hit with the shocking news of his infidelity. But always the fighter, Sandra picked up the pieces and moved on to her happily ever after.

There is no doubt that Sandra Bullock is one of the finest actresses of our generation. Since the mid-90s, the actress’s versatile performances and magnetic star power have been keeping us coming back to the theatres year after year. But it’s her off-screen celebrity that’s also played a part in winning hearts all over the world, so much so that she’s been labelled as ‘America’s Sweetheart’ on many occasions.

RELATED: After Surviving Abuse Twice, Rihanna Is Ready To Have Kids With Or Without A Man

And while it’s undeniable that Sandra’s career has continued to thrive over the years, her love life has been less consistent in that regard. Even though she kept winning accolades one after the other, the media were more focused on playing up the drama in her personal life. It’s often the case that the press like to disparage a woman when she’s at her most successful, but Sandra soldiered on with resilience.

Today, she’s in a happy relationship and is a mother to two children. Despite the common occurrence that women are often pressured to choose between their careers and their family, Sandra demonstrates that it’s possible and even worthwhile to have both, but only if you’re willing to work for it.

While Sandra was romantically linked to a number of A-listers early on in her career, including the likes of Ryan Gosling and Matthew McConaughey, she didn’t get married until she was in her forties. She met motorcycle builder and reality television personality, Jesse James, when she took her godson to meet him at Jesse’s garage. It may have been a Christmas present for her godson, who’d been a massive fan of Jesse James’ custom motorcycles at the time, but the meeting turned out to be quite a gift for Sandra herself.

The pair got married on July 16, 2005, and Sandra became a step-mom to Jesse’s three children from previous relationships. Sandra even stood by his side dotingly as Jesse fought for custody of his youngest child with former wife and adult film actress Janine Lindemulder. Regardless, their marriage had seemed perfectly content; Sandra and Jesse had also initiated the process of adopting a child and adding another member to their family.

Note that Sandra hadn’t always had an easy time dating during her thirties. In a 1996 interview with Dennis Henley for Detour, Sandra had said that dating was the worst experience she’d ever had. She also revealed that she had attracted the attention of individuals who had not had the best intentions.

So finding love nearly ten years later in the form of marriage and family was a dream come true in many ways for Sandra. She’d truly learnt to love her step-children as if they were her own, going so far as saying that not having those kids address her as ‘mom’ hurt her.

Being a parent is not about breeding. It’s about caring

Jesse accompanied Sandra through all the showbiz events and award shows and was her rock through and through. She even acknowledged him in her Golden Globes speech, saying that she never knew what it felt like for someone to have her back.

But alas it was all too good to be true. Shortly after her Best Actress win at the Oscars for performance in The Blind Side, reports began emerging about Jesse James’ numerous infidelities. As many as four women came forward with cheating allegations whereas The National Enquirer reported that Jesse has cheated on Sandra with about 11 different women.

As many would expect, this was a drastic development for Sandra. She barely got a moment to savour her award-winning moment before her personal life was turned upside down and unleashed wide open for the whole world to consume. Sandra even had to take time off from promotional appearances due to the paparazzi onslaught.

So it was hardly a surprise when Sandra filed for divorce within a month of these reports. Jesse meanwhile issued a public apology over his transgressions and checked into a rehab facility. But the damage had been done. Sources told E! that Sandra was blaming herself in part for the entire ordeal.

As it so often occurs with women, we feel responsible and guilty for events that take place entirely outside our control or realm of knowledge. Whereas Sandra should have been feeling proud and on top of the world with her Oscar win, which is pretty much the highest achievement any actor could hope for, she was having to deal with unpleasant, ugly scandals about her marriage that overshadowed both her success as well as her peace of mind.

How Sandra Bullock Found Her Happily-Ever-After

In the same year in which Sandra filed for divorce with Jesse, she also announced that she had adopted her three-month-old son Louis from New Orleans as a single mother. Jesse and Sandra had brought him home together but following the breakdown of their marriage, Sandra decided that she was going to go through motherhood on her own.

She subsequently went to adopt her second child Laila in 2015. Over the next few years, she focused on being a dedicated single mother to her young children while at the same time committing to phenomenal acting projects on the side.

Society still, as open-minded as we’ve become, has these rules that quietly say: ‘This is the way it goes’. They’re saying: ‘It’s a man and a woman, and then you have a baby, and that’s the family.’ I go: ‘Oh my god, I’m in a single parent. With a child. How am I…’ I felt less than. I felt: ‘I’m not the complete package.’ And then I realized… This is the complete package.

Sandra Bullock to The Independent

And she wasn’t afraid to find love again either. Around 2016, Sandra met Bryan Randall, an ex-model and the owner of a photography business, and it’s been smooth sailing for the couple since.

The pair don’t go public about their romance and are rarely photographed together, but Sandra has expressed how’s helped her navigate motherhood. She’s said that he’s “super kind”, and that he’s likely “number 1” to the kids because he’s more fun and has better treats. However, as great as an addition Bryan is to their family, Sandra maintains her belief that a man doesn’t necessarily make her family more complete.

Why you should never give up hope on starting over

We’re all where we’re supposed to be. I am exactly where I want to be now. You can’t go backward. I’m not going backward. I’m grateful that I’m here, blessed to have what I have. Nobody can be prepared for anything

Sandra Bullock at 55 is miles more pleased and fulfilled than we could hope to be in our own lives. The woman’s been through some challenging circumstances, the kind that devastates and shatters a person inside-out, but she kept working away on her priorities.

Being a step-mother to Jesse’s children told her that she didn’t need to be related by blood to be a kind, loving and frankly, incredible mother to her children. Motherhood, or parenthood for that matter, is not about blood but about the love that flourishes between parent and child.

Moreover, she maintains her stance on single motherhood; the fact that you would need both a mother and father to raise a well-adjusted child is a little absurd for this day and age.

But being a single mother did not hold Sandra back from seeking love again. Her relationship with Bryan tells us that it’s never late to find love and furthermore, it’s never late to pick up the pieces of your broken heart and move on as best as you can.

You don’t necessarily need to jump into another relationship as a rebound but you also can’t give up hope that there is a special someone waiting for you. All you have to do is believe and open up when the time is right. And your happily-ever-after will be waiting for you.