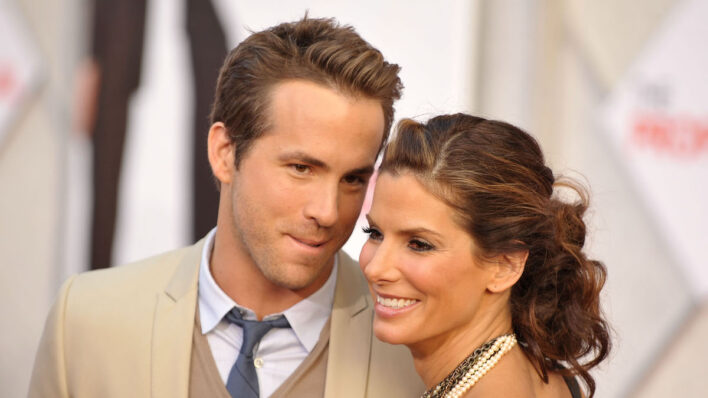 The Truth Behind Ryan Reynolds And Sandra Bullock’s Inspiring Friendship

Sandra Bullock and Ryan Reynolds wowed the whole world with their chemistry in ‘The Proposal’ but here’s the powerful reason why they never got together.
By Shaoni Das    June 27, 2020

Sandra Bullock and Ryan Reynolds wowed the whole world with their chemistry in ‘The Proposal’ but here’s the powerful reason why they never got together.

Hollywood is no stranger to actors falling in love with each other on set. So many epic relationships have emerged through the shared experience of working together on a movie or a tv series–for example, Brad Pitt and Angelina Jolie. In fact, for many, that’s probably the most viable way of finding love because if you feel like you can get along with someone on a project, then you might be able to get along with them for life.

Sandra Bullock and Ryan Reynolds are two such people that felt pressured to get together as a couple following their hit film The Proposal. When such iconic romantic comedies come along, viewers can’t help but blend fiction with reality. If the romantic chemistry is so evident and striking, then that must be grounds to believe that these two might actually be the perfect match for each other.

One thing to note is that both Ryan and Sandra have had troubling relationships during and since that time. They’ve gone through divorces, became parents, gotten into new relationships — all while fans were clamoring to see the two of them reunite in either film or in real life.

They could’ve easily given in to those demands and explored something romantic. However, the two bucked the trend and followed their heart to build a relationship that turned out to be more valuable than a romantic partnership.

Ryan considers Sandra as part of his “family”

When discussing movie aspirations years after The Proposal had come out, Ryan was completely upfront about the fact that he would work with Sandra a thousand times over. He said that he’d love to do another movie with Sandra and that the pair had already talked about it many times. Ryan also said that the sparkling chemistry that stunned views in the film was based on a friendship that already survived for ten years at the time of filming.

We had known each other for a long time when we went into that. If it’s the right [project], we’ll do it because it’s like working with family. It’s a great experience.

Ryan Reynolds on The Entertainment Inquirer

This is the same pair that had been caught celebrating New Year’s Eve together and have also been spotted on going on vacations together — of course, people were going to assume that something steamy was taking off.

But we also have to examine as a society on the constraints we place on male-female relationships. You might have heard the term: “men and women cannot stay friends.” Some people whole-heartedly believe that men and women cannot see each other as genuine friends, that there is a  potential of romance or lust looming over their heads at all times.

It’s yet another direct result of the gender stereotypes that operate in today’s society. Some people refuse to acknowledge that men and women could build genuine friendships with each other based on trust, respect, and love that’s not either romantic or sexual. It’s just emotionally fulfilling and that’s all that it is.

Sandra Bullock said that Ryan is an “amazing friend” to her

Media and paparazzi have worked so hard over the years to create a narrative about Sandra and Ryan’s personal life. Some had speculated that Ryan was making Sandra a “mother” at 47, whereas others believed that Sandra and Ryan were planning a secret wedding. Those are some of many bizarre stories that seemingly cropped up with no evidence whatsoever.

When asked whether she was dating Ryan, Sandra said that he’s nothing but an amazing friend to her. Indeed, she wouldn’t dare to strike up a relationship with Ryan, seeing how he was and is a heartthrob with a horde of fiercely protective female fans.

I think there will be a collective sigh amongst women in the United States when I say, he’s not my lover, he’s just an amazing friend I’ve had for 10 years. And I hope there’s more friendships like that, but I don’t get his loving after dark.

The star of Gravity went to add that the only man in her life at that time was her son Louis. Fans of Sandra Bullock would know that the woman has never bothered with adhering to convention when it comes to her personal life. She adopted her first child after turning 45 and a daughter at 50 — she’s not about making crucial decisions based on what fans or media expect.

Ryan even has a lovely bond with Sandra’s son Louis

Even Ryan has weighed in on building a bond with Sandra’s son, Louis. He said in 2011 that he’s not ready to be called an “uncle” just yet because he’s already gotten close to Louis. Insiders also told Us Magazine that Ryan and Louis get along great and that Louis always “smiles” when Ryan is around the house.

Those reports surfaced when Ryan had already divorced from Scarlett Johansson and before he had eloped with Blake Lively. As is the case with the culture in Hollywood, single people are continually thought to be in a state of restlessness — their public lives are scrutinized to no end and theories about who they’re dating crop up on the daily.

But the fact that Ryan was able to become such a positive influence in Sandra and Louis’ life without being a father figure or Sandra’s partner shows that the best relationships in life do not necessarily need a romantic factor. Ryan and Sandra have always shined as friends and it is obvious even today.

In early 2020, the two reunited to wish their The Proposal co-start and iconic comedienne Betty White a very happy 98th Birthday. A friendship that’s going into its twentieth year still seems to be running on full steam. Ryan even joked that he’s a better friend to Betty than Sandra is.

If you’re able to be as hilarious and casual with each other whilst being in long-term relationships and raising kids with other people, maybe that says something about the longevity of male-female friendships.

You can’t hold back on friendship with anyone

Ryan and Sandra’s everlasting friendship tells us that we shouldn’t back down from any emerging friendships. Even though people might make assumptions and tell us that it somehow goes against nature or tradition, we need to evaluate for ourselves on how friendship could affect us, positively or negatively.

As their personal lives went through a whirlwind behind the scenes, they had each other to lean on through all the challenges. Ryan’s been in high profile relationships and has been divorced whereas Sandra’s personal life was left for media vultures after a series of cheating allegations had come up against her ex Jesse James. But in times of romantic strife, you can rely on only your closest friend to get you through and cheer you up.

Male-female friendships are misconstrued and underrated. But there’s still a chance that people wake up to reality and realize that they’re just as valuable and meaning as any other friendship. Because romantic relations come and go, but friendship, such as Ryan and Sandra’s, hold up through the years and comfort us when we need it the most.

Looking for more uplifting content? Check out our article of inspirational quotes.