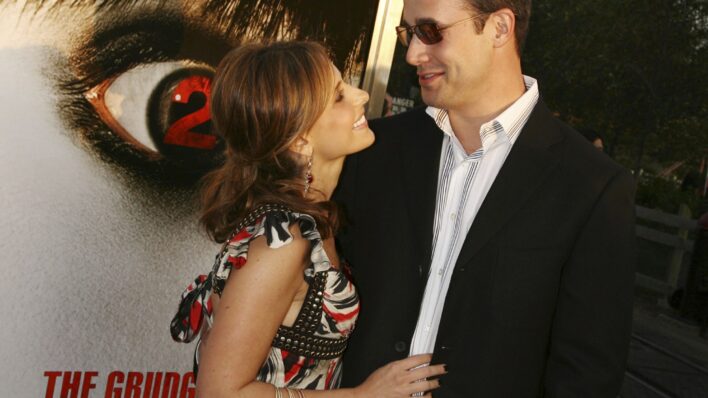 Sarah Michelle Geller fell for her friend and costar Freddie Prince Jr., proving yet again that friendship really is the key to successful relationships.
By Eliza Theiss    October 22, 2018

Sarah Michelle Geller fell for her friend and costar Freddie Prince Jr., proving yet again that friendship really is the key to successful relationships.

When Buffy the Vampire Slayer first aired it was a game-changer. The seminal teen series created a whole new genre, exploring territories untouched before. At the heart of it was its iconic cast, lead by Sarah Michelle Geller. Fiercely independent Buffy may have suffered plenty of heartbreak, and fans were thoroughly divided between their loyalties to who was the one to truly deserve Buffy’s love: brooding good-guy Angel or bad boy Spike?

Of course, in the end, Buffy chose herself and her mission to save the world (yet again). Off-screen, Sarah Michelle Geller shot to superstardom, which brought her to yet another iconic project — we are of course talking about horror hit I Know What You Did Last Summer. The horror flick became an instant success at the box office and has since become a pop culture staple. But for Geller it was to have a much more important role. It was here that she met fellow teen icon Freddie Prinze Jr.

Just like another power couple we’re in love with, Twitter royalty Blake Lively and Ryan Reynolds, Sarah and Freddie started out as friends. Known for her professionalism from her earliest Buffy days, Sarah and Freddie didn’t start dating on set. They became friends, and their friendship spanned three more years before they took the next step. They started dating in 2000 becoming one of Hollywood’s it couples to the delight of young Millennials everywhere. After all, these were the years of Scream, Cruel Intentions and the Scooby Doo movies.

18 years, later the two are the proud parents of nine-year-old Charlotte Grace and six-year-old Rocky James. The two stars tied the knot in 2002 in Jalisco, Mexico with a four-day celebration attended by dozens of guests, among them fellow starlets like Shannen Doherty and Wilmer Valderrama. The bohemian beach wedding may have had to move indoors due to inclement weather, but the bride and groom didn’t let it rain on their parade, partying until daybreak.

Even when things gets crazy and life pulls a couple in different directions, you have to choose to make your significant other a priority. Even if you can make them a priority only for a little bit, spending time together and connecting is the glue that keeps it all together.

“Take the 10 minutes – put the phone down. Have a cup of coffee together. Walk the dog at the end of the night. Read a story with your kids. Make the most of the time that you have. We are all pulled in so many directions, so make sure that, whichever one you are focusing on, you’re present,” Geller told PEOPLE.

A big fan of Instagram, Geller often shares snaps and videos of her life on the social media platform. And she’s not afraid to express her deep love for her partner in life and baking, Freddie. Whether it’s a lighthearted post about family time, a fun snap from date night, a giddy gram about the secret to a happy marriage — tip: it’s having a club and a spade — or an open and joyful confession of love, Geller isn’t afraid to shout her love from the rooftops.

But it’s not just Geller taking every opportunity to show Prinze how much she cares for him. Mr. Buffy may not be much for social media, but he proudly and happily speaks of his long-running marriage. “We were just friends for a good two years before we ever went on a date. She knew what kind of guy I was. She knew what my morals were, what my priorities were and vice versa. We already kind of knew all the faults in the other person,” Prinze told E! News, adding: “We ended up being the perfect balance. But it didn’t happen until years after and there was a solid foundation built, and that’s probably the main reason why we’ve always been cool and groovy.”

But it’s not just date nights, jokes and epic declarations of love for Sarah Michelle Geller and Freddie Prinze Jr. It’s hard work and showing up for each other. It’s supporting each other’s endeavors, doing things together and giving each other some space and privacy too. Separate bathrooms aside, it’s essential for partners to still retain their own lives and private space, even after almost 20 years together.

Laughing together is also an important component for the enviable couple. Whether it’s Geller joking about how separate bathrooms are key to a successful marriage, or how she’s been widowed by World of Warcraft, laughter is always ready to bubble up around the Scooby Doo costars. “If they can make you laugh, laughter lasts forever,” Prinze told E! News a while back — as far as he’s concerned looks will ultimately fail, but laughter will always keep the relationship alive.