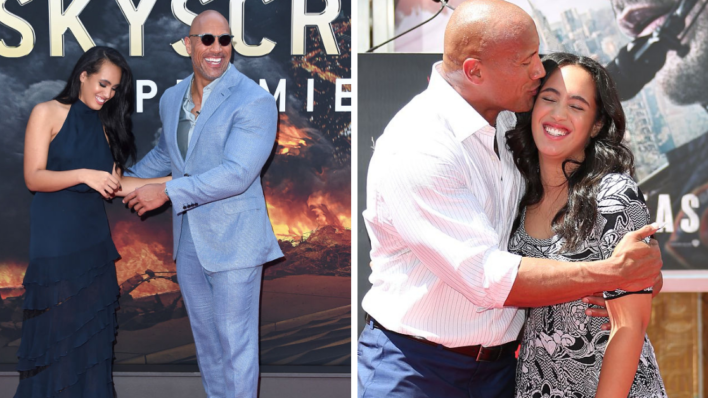 All signs are pointing to 18-year-old Simone Johnson becoming a fourth generation star wrestler. But her famous dad, Dwayne “The
By Joel Balsam    December 29, 2020

All signs are pointing to 18-year-old Simone Johnson becoming a fourth generation star wrestler. But her famous dad, Dwayne “The Rock” Johnson, wants to make sure she’s doing it for herself and nobody else.

In early 2020, Simone Johnson signed a contract with the WWE and began training to become a pro wrestler.

She’s now on track to be a fourth-generation family member in sports entertainment, following in the legendary footsteps of her great-grandfather and grandfather, WWE Hall of Famers “High Chief” Peter Maivia and Rocky Johnson, as well as her father, Dwayne “The Rock” Johnson.

And the young Johnson is doing great so far.

“She’s hungry to learn and picks the coaches’ minds, and the veteran Superstars’, as well,” said Matt Bloom, Johnson’s coach at the WWE Performance Center, to WWE Network.

Bloom added that Johnson isn’t relying on her family connections to work her way up. “She’s not going to rest on her laurels. It’s been a short time, but she’s been crushing it.”

Johnson said training to be in the WWE has been a dream come true.

“It means the world to me,” she said.

“To know that my family has such a personal connection to wrestling is really special to me and I feel grateful to have the opportunity, not only to wrestle, but to carry on that legacy.”

The Rock approves – on one condition

A legendary wrestler in his own right, The Rock is proud of his firstborn daughter, who he had with ex-wife Dany Garcia.

“Dreams ain’t just for dreamers,” he wrote in an Instagram post. “Congrats to my #1 born, Simone Johnson on officially signing her wrestling contract with @wwe @wwenxt and on her way to becoming the first ever 4th generation WWE athlete.”

But The Rock wanted his teenage daughter — and everyone else — to know that if she didn’t want to pursue wrestling that’d be fine with him. Her path is her own to pave.

“Carry our family name proudly, but your road will always be yours to create, earn & own. So proud. Live your dream. Let’s work. #humblehungry #hardestworkersintheroom #4thgeneration.”

It can be so tempting to dream of our children following in our footsteps — whether it be taking over the family business or excelling at sports.

But while motivating them is important, adding too much pressure can be debilitating and create resentment. At the end of the day, a child’s life, and their dreams, are theirs to build and nurture.