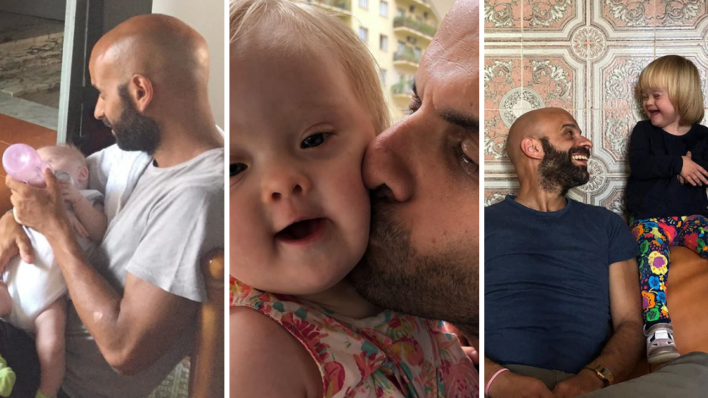 All too often, it’s the most vulnerable of children that are left abandoned in orphanages – whether they are sick
By Aly Walansky    December 15, 2020

All too often, it’s the most vulnerable of children that are left abandoned in orphanages – whether they are sick or disabled, prospective families often cast them aside for babies that will be easier to integrate into their own families.

But sometimes, truly special future parents seek out those kids that are most needing of love and a family.

A long journey to adoption

Luca Trapanese is one of those special people. The single dad from Italy adopted his daughter Alba in 2017 when she was just a few weeks old. Trapanese, who is gay, ran into some road blocks himself, as Italian courts don’t often grant custody to single, homosexual men.

But that didn’t stop him or scare him away, and one day, he met the beautiful baby Alba when she was just under two weeks old. She had been abandoned by her birth parents after being born with Down’s Syndrome. In fact, twenty different families rejected baby Alba during those first few weeks of life for the same reason.

“Since I was 14 years old, I have volunteered and worked with the disabled so I felt I had the right knowledge and experience to do it,” Luca told the media.

He instantly knew it was the right decision.

“When I first held her in my arms, I was overcome with joy. I felt she was my daughter straight away.”

The first time he held a newborn

That was actually the first time he had held a newborn baby, but he instantly knew it felt right. “I had always been scared. But, when I first held Alba, I knew I was ready to be her dad,” he said.

“She brought me happiness and a sense of fulfillment. I am proud to be her dad. I wanted her to be my daughter.”

Having so much love to give

There’s so much love to be given in the world, and so many who so badly need that love. How wonderful when those people, with love to give, and in need of that love, can find each other!

The heartwarming story of Alba’s adoption is a reminder that while there are many children who never end up finding a loving home, some do despite the odds — and their futures are drastically altered for the better.

And if you sometimes feel like you have so much love to give, never hesitate to find ways to share it with others. Doing so can be just as rewarding as being on the receiving end of it.