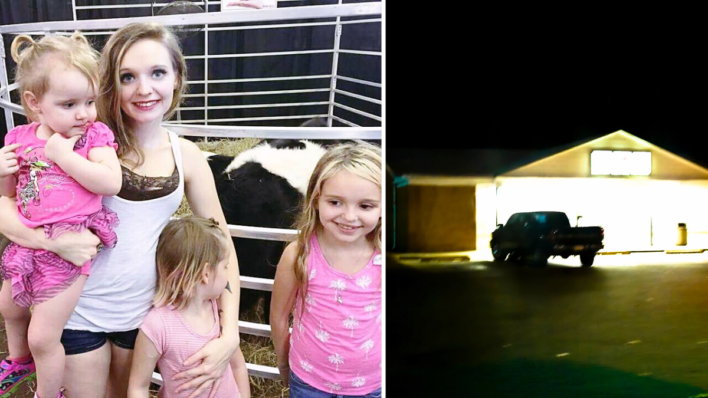 When her truck battery died in a grocery store parking lot, one mom and her 4 kids received help from an unlikely stranger.
By Lindsey Staub    May 2, 2022

When her truck battery died in a grocery store parking lot, one mom and her 4 kids received help from an unlikely stranger.

Tawny Nelson and her four little girls had been having a rough time. More than anything, Tawny needed the help of a guardian angel, which finally arrived to her one rainy night.

Tawny’s previous relationship had just ended, and the truck she used to get everywhere was in utter disrepair.

“Things have been particularly rough since my ex left,” she told KTVU news anchor Frank Somerville. “My truck had a flat I constantly had to air up. The driver side window motor died. And I needed a new alternator belt. The truck was a mess. And we didn’t drive anywhere unless we had to.”

Though she tried avoiding using the car at all costs, when Tawny realized she needed to go to the store one day, she drove herself and her daughters – ages 9, 5, 2, and 6 weeks – to the Winn-Dixie nine blocks away.

When we got out of the store it was far after dark. And POURING rain. I loaded my kids and groceries into the truck. Tried to crank it…… Nothing. No click. Nothing.

Unfortunately, a simple mistake caused the car to run out of battery.

“One of my girls as accidentally left a light on. My battery was dead. My phone was also disconnected,” Tawny said. “I have no family to speak of and was on my own.”

For the next two hours, Tawny asked more than 20 people for help. No one even batted an eye.

They all ignored me. Not even a ‘no’. Just acted like I didn’t exist. My 5-year-old was melting down. My newborn SCREAMING, my two year old crying she was hungry, and my oldest desperately trying to help. I was bawling and felt like the worst Mom ever. Then I got a knock on the passenger window.

RELATED: Mother of 2 Hears Startling Knock on the Door – What Security Camera Reveals Is Not What She Expects

Sure enough, right when Tawny most needed it, a guardian angel arrived on the scene.

“An older gentleman (he was 74) with a cane and a bad limp was on the other side of that knock,” Tawny recalled. “I opened the door. He handed me a plate of chicken strips and biscuits from the deli and bottles of water. ‘Feed those babies and yourself young lady. I have a tow truck on the way and my wife will be here shortly to take y’all home.’ Sure enough she arrived followed by the tow truck. Us and our truck were taken home.”

The man did not stop there! The morning after ensuring Tawny and her daughters got home safe, he returned to their place of residence with a mechanic to fix Tawny’s truck.

The next morning the gentleman returned to my house with a mechanic who replaced my battery and alternator and fixed my window. The elderly gentleman then left and did not return. When I asked what I owed the mechanic and if I could make payments he smiled telling me the older man had paid for all of it.

The man only requested one thing of Tawny: Just keep going.

“[The mechanic] said that the only payment the older man wanted was for me to never give up and keep being an amazing mom. I’ve never cried so hard in my life. Things had been absolutely awful. More so than I care to explain. And without knowing us or our situation this kind man helped us in ways he will never know.”

Though Tawny has not been able to repay her angel, she has committed to paying the generosity forward. “What he did revived my faith when I was falling apart. But he wouldn’t even take a hug. I’ll never be able to thank him. But I certainly hope one day I can do what he did for me for someone else,” she said.

How Paying a Kindness Forward Can Generate a Ripple Effect

“Thank you so much for sharing my story Frank,” Tawny told Somerville after he shared her story. “I hope it helps someone else who’s struggling see angels will come when we least expect them.”

RELATED: Woman Forced To Live In Car Gets A Knock On Her Window – What Happens Next Changes Her Life

Several people passed by Tawny that day in the rain, unwilling to lend her a helping hand, but all she needed was that one man to extend a favor. His kindness not only saved Tawny and her children, but has created a chain-reaction.

Like a ripple effect, the compassion the man showed Tawny continued to spread as Tawny and those inspired by Somerville’s Facebook post carried on the older man’s mission to help those in need.

lead with generosity
“That’s what I consider true generosity: You give your all and yet you always feel as if it costs you nothing.” – Simone de Beauvoir
Tags
Share
← Prev Post Next Post →