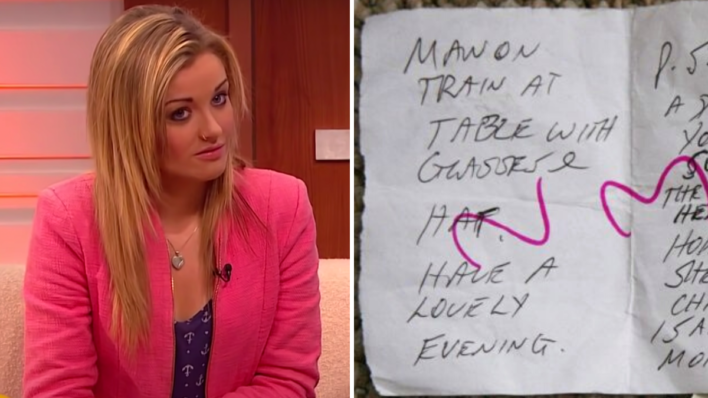 Stranger Watches Single Mom With Her Kid On A Train – Then, Hands Her A Note About Her Parenting

When one man saw how well a young boy behaved on a long train ride, he had to acknowledge the mother who had raised the boy.
By Lindsey Staub    July 17, 2022

When one man saw how well a young boy behaved on a long train ride, he had to acknowledge the mother who had raised the boy.

Though planes, trains, and automobiles are often beloved by little boys, actually traveling in one with a child can prove difficult. Keeping a young one entertained and comfortable in one seat for an extended period of time is a feat for any set of parents, let alone a mother by herself.

Sammie Welch, the single mother of a 3-year-old boy, however, did a fantastic job with her son Rylan. Fortunately, she was acknowledged for it.

The train ride Sammie embarked on with Rylan in 2018 was 6 hours long, the two of them in a carriage full of other passengers the whole time. Sammie desperately wanted to avoid Rylan having a tantrum and disrupting the other commuters.

For hours, Sammie worked to keep Rylan entertained. The two of them counted things out the window, painted, read books, ate sandwiches, listened to music, and played games, and Rylan was well-behaved through all of it. Finally, Rylan fell asleep.

Sammie hadn’t noticed him before, but as he disembarked, he tapped her on the shoulder and handed her a piece of paper.

RELATED: Parents Ask for the Check after Dinner – They Get a Surprising Note from a Stranger Instead

The paper had words written on it and was wrapped around a 5 pound note. Sammie unfolded the letter to read what it said:

“Have a drink on me. You are a credit to your generation, polite and teaching the little boy good manners.”

On the back were even more heartfelt words.

“P.S. I have a daughter your age. Someone did the same thing for her once. Hope when she has children, she is as good a mother as you.”

Unfortunately, the man was off the train before Sammie had the chance to thank him and explain to him how appreciated his message made her feel.

“I worry I’m not doing a good job with Rylan all the time — all the time. I worry, am I too hard on him? Am I too soft on him? I try so hard to get it right. So for someone to say I’m going a good job means everything,” Sammie told Daily Mail.

She went on to add, “I was shocked that someone I didn’t know and hadn’t even spoken to before had done this.”

Sammie took to Facebook and the local newspaper in search of the kind man. Six days later, he came forward and introduced himself as 50-year-old Ken Saunders.

“I don’t think he realized the impact of what he did. How it made me feel. I just wanted to thank him. That was all,” she said.

RELATED: Fallen Officer’s Car Is Covered with Flowers and Flags – But One Note Leaves Everyone in Tears

Ken didn’t want to take any credit for what he did. “I wasn’t going to tell anyone — why would I? It’s no big deal. Lots of people do things like this all the time,” he said.

Ken took a little time out of his day to acknowledge Sammie’s hard work and triumph, reaffirming her as a mother and brightening her day. Like he said, it wasn’t a grand gesture, but a simple and kind act, something that any of us can do. But even though the act wasn’t big, its effects were, showing that a bit of kindness can have a huge positive impact.

Customer Steals Sentimental Items at a Store – The Next Day, He Returns for an Unexpected Reason