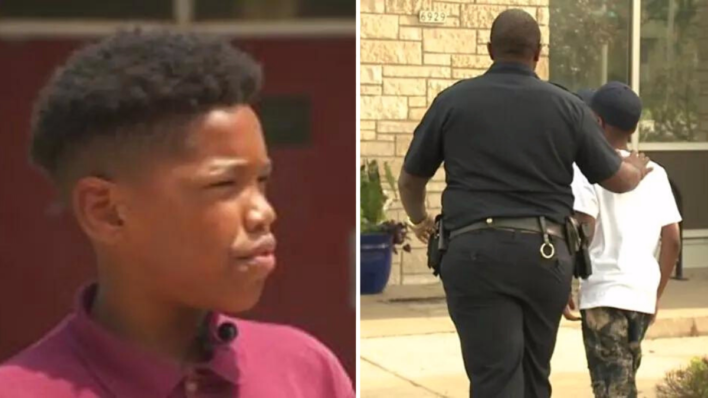 One little boy’s handwritten note to fallen Officer Irvine reads: ‘Thank you for being my best friend.’
By Sophie Tolias    June 2, 2022

One little boy’s handwritten note to fallen Officer Irvine reads: ‘Thank you for being my best friend.’

The note was left by 12-year-old Avant Turner. The boy wrote a letter to the fallen officer, who was 23 when he died in the line of duty.

“I went to the car and I looked at the picture. Shock. I just saw the car on TV — flipped over. I went to school and got a pencil and paper. I told him, ‘Thank you for being my best friend, and for helping me,’ and I put ‘sincerely, Avant,'” said Turner to FOX6.

How a Sixth Grader Became Unlikely Friends with a Police Officer

Turner met Irvine after the officer arrested his older brother and took a special interest in Turner, allowing the boy to confide in him.

Turner, a sixth-grader at Carmen School of Science and Technology near District 4, said he had been visiting Officer Irvine on his way to school since they met.

“He used to be behind District 4. He used to ask me about school sometimes — was I doing good, and did I need his help for anything. He’s the only one who helped me out with school. For example, if someone was trying to pick on me and I couldn’t get a hold of a teacher, he’d tell me to walk past him and stuff,” he told FOX6.

Turner was devastated when he heard the news.

He was the only person I could tell me secrets to. I can’t tell you my secrets. I can only tell him because he’s the only one that understands.

Avant eventually stopped by the station to visit Irvine’s memorial and that’s where he left his friend a note, which read, “Thank you for being my best friend and for helping me calm down.”

He also left a toy car that he got for Christmas because he wanted his friend to have it.

“There’s a lot of stuff going on with cops again, where the community isn’t believing the officers, but you can find a lot of faith in some of them,” Turner’s mom Latrice Jefferson told WISN 12 News. “You have to locate those people, and Officer Irvine was one of them.”

Jefferson said she was worried about the void Irvine’s absence would leave in her son’s life but thankfully other officers and members of the community stepped in for Irvine. Community organizer Tracey Dent, from Peace for Change Alliance, railed together the community and officers of District 4 to assure Jefferson and her son that there are still people who care for Turner.

“He said that I’m welcome anytime, to come to District number four for any problems or anything. He said I can speak to him like I speak to Irvine,” the young boy said.

Turner says he hopes to be a police officer just like his best friend when he grows up.