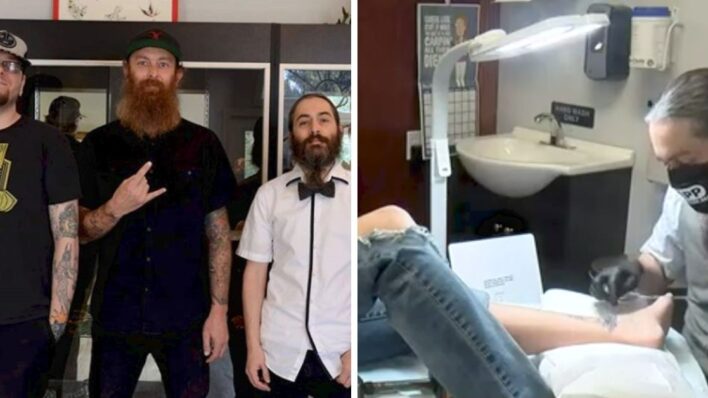 These Tattoo Artists Are Giving People A Second Chance At Life

Ryun King and Jeremiah Swift wanted to help in the fight against racial injustice. They decided to give people a second, in their own way.
By Kawter    June 16, 2020

Ryun King and Jeremiah Swift wanted to help in the fight against racial injustice. They decided to give people a second, in their own way.

A tattoo is a pretty permanent thing–and the process of getting one removed can be tedious and costly. However, when it comes to the decision itself, many have listened to their impulses and thoughts at the time but have come to regret their ink later in life.

Be it the name of girlfriend or boyfriend who is no longer a part of their life, or just a misplaced, ugly tattoo, regretting the decision is not uncommon. Yet, for others, an old tattoo can bear more weight, especially when it no longer reflects who they are.

Hate and gang symbols are prime examples of tattoos that can have continuous, negative impacts on someone’s life. Many people grow out of their hatred and learn to be better human beings, but continue to be associated to their past because of their tattoos.

That’s why Ryun King and Jeremiah Swift from the Gallery X Art Collective in Murray, Kentucky, decided to step up and help these individuals erase their last physical connection to their pasts.

A free service, to unite communities

In light of the recent protests going on in the United States against racial injustice, Ryan and Jeremiah wanted to help unite communities in the best way they could.

I just wanted to help out in someway. It’s the only platform I have.

They realized that a lot of people made mistakes when they were younger and didn’t have to live with the reminder on their bodies.

Having anything hate related is completely unacceptable. A lot of people when they were younger just didn’t know any better and were left with mistakes on their bodies. We just want to make sure everybody has a chance to change.

Ryan and Jeremiah to CNN

They decided to offer their services free of charge in a Facebook post that read: “If you have a racist tattoo and you want it gone, I’ll cover it for free. No questions asked. I choose the design. Let’s get that shit off your body.”

In their post, they asked people to re-share their message so they could spread their message around. So far, 30 people have already reached out to get their services.

A question of compassion and empathy

Ryan and Jeremiah realized the impact of their initiative when they met up with some of the individuals who reached out.

“One of the people we got was a man with both of his forearms completely covered in hate symbols, absolutely everywhere,” Ryun said. “How is this man going to interact with society with the mistakes he made 10, 15, 20 years ago?”

To some of these people, their tattoos were a constant source of shame. It even limited them in their daily lives. One man who had come for their services revealed he had never removed his shirt in front of his children because he was ashamed of his tattoos.

I like seeing that. I like seeing people want to change themselves for the better. That swells me full of emotions.

A chance at a new life

Ryun’s first client was Jennifer Tucker, a 36-year-old mother of two who wanted one of her tattoos covered up.

“I went to a school where there wasn’t a single black person,” Jennifer explained. “Our community had no black families, they would literally run them out every time one moved in. Everyone in my school flew rebel flags and had rebel flag tattoos and I bandwagoned and got the tattoo. It was a horrible thing to do.”

When a friend of hers sent Ryun and Jeremiah’s post to her, she immediately jumped at the chance to have it removed.

It feels so amazing, it’s life changing. I knew I had to do it, to be an example for other people who were in the same position. There’s not a whole lot I can do, but this is something I can do to spread love, not hate.

Her daughter was very proud of her for taking the step. As for Jennifer, she said that she’s finally ready to begin a new chapter of her life, full of love and kindness and has joined the fight for solidarity.

Ryun and Jeremiah’s offer to help in their own way is not an insignificant contribution to the struggle for a better world. As people grow and learn from their past mistakes, they deserve a chance to move forward with love.

With compassion, and no judgment, Ryun and Jeremiah have offered the opportunity for these people to shed their past mistakes. That is certainly a large contribution as we collectively strive for a better world, together and united.