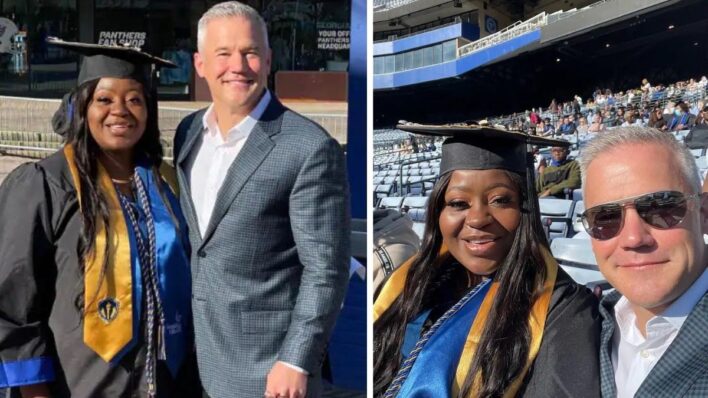 That’s exactly what happened for Latonya Young and Kevin Esch. While working for Uber one night in May 2018, Latonya picked up Kevin to drive him home after an Atlanta United soccer game. The two started talking.

“The conversation was easy and felt authentic.”

On the two-and-a-half-hour long drive to Esch’s residence, he and Young discussed their lives and opened up to one another about what was really going on. Esch confided in Young about his divorce, and Latonya confided in him that she was working late that evening to pay her utility bill.

As they got to know each other more and more, Latonya, a single mother of three, also revealed that she planned to pursue higher education. In fact, Latonya told Kevin that she wanted to be the first member of her family to complete college.

Latonya had enrolled at Georgia State University in 2010 but was forced to drop out due to financial reasons. With tuition being too high and her dreams of a post-secondary education temporarily shattered, Latonya thought that her dream would remain out of reach. But, after a promise to her Uber passenger Kevin, her dream would eventually become a reality.

“She promised me that she would go back to school,” Kevin says. When Esch left, he tipped Young $150 for the utility bill and he also asked Latonya to keep him up to date on the enrolment process.

By the time Esch got out of Young’s car, it was settled.

“I had my mind made up that I wanted to go back to school.”

Some weeks later, Latonya attempted to re-enroll at Georgia State University, but there was a problem. She was told that there was a $693 balance from her previous studies eight years prior that had to be paid before she could recommence her studies.

Well, not all heroes wear capes (though some do ride in Ubers), because Kevin went straight down to the university and paid off the amount without Latonya’s knowledge.

“I didn’t want that to be a roadblock, because it was something that I could change,” Kevin says.

Esch saw that he had the power to make a difference in Latonya’s life and he did. He says, “I was in a place to be able to do it, and it was the right thing to do.”

Once the balance was paid, and Young could re-enroll in college, there was no stopping her. She was in shock at Esch’s kindness and promised to pay him back, but he did not want payment. Kevin simply responded to Latonya’s vow to pay him back saying, “Pay me back by graduating.”

And graduate she did, twice! Beating all of the odds as a divorced woman who had her oldest son at 16, had to drop out of high school and later get her GED, worked multiple jobs, and did it as a single mom, Latonya returned to school.

Young re-enrolled in classes in December 2019, studying an associate’s degree in criminal justice from Georgia State’s Perimeter College. On graduation day, Kevin Esch was there.

Then, while working as both a substitute teacher and hair stylist, Latonya returned to school again, this time pursuing a bachelor’s degree in criminal justice from Georgia State’s Andrew Young School of Policy Studies. Once again on graduation day, May 6 of this year, Kevin was there in the stands! Esch says that when Latonya’s name was called to get her diploma he felt “pure pride.”

Latonya Young wants to become a federal probation officer. Young is also releasing a book titled “From Broken to Blessed” on June 7. In “From Broken To Blessed,” Latonya talks about her life and about how one particularly significant Uber ride changed it.

“He motivated me,” the single mother of three says of her Uber passenger turned supporter and lifelong friend.

This act of kindness gets five stars. The kindness of strangers is a commodity that makes the world go round. Unlikely friendships struck up in unlikely places sometimes make for the most impactful relationships of our lives. And inspiration, motivation and support can come from surprising places.