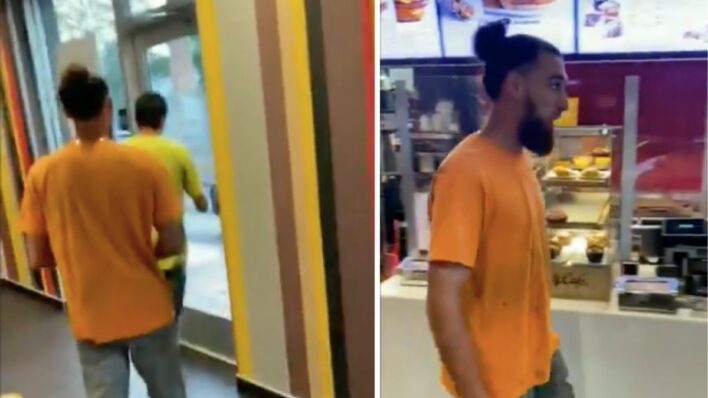 A video of two obnoxious McDonald’s customers bullying a restaurant employee has ignited a long-overdue debate on fast food worker’s pay and conditions.

It’s no secret that fast food jobs aren’t always the most glamorous. After all, you often work long hours, do repetitive work, and contend with unruly customers– all for a paltry pay.

However, there are moments that force everyone to rethink what’s acceptable. An ugly incident at a McDonald’s in Bradenton, Florida was one of them.

The video captured two young men irate at a female employee and accusing her of being rude.

However, the real reason for their outrage was that the employee forgot to put the sausage in their McGriddle, a McDonald’s pancake-plated breakfast sandwich.

That’s when all hell broke loose.

“If I’m a customer in the f***g curbside, you should ask what car its in and not f****n’ be rude as f**k like the mean-ass b***h you are,” a customer in an orange shirt can be heard saying in the video shared by Twitter user @davenewworld2.

The two men fled when the man recording the incident ordered them to leave.

A call for change

Comments poured in, many who applauded the man for standing up to the bullies.

For others, it brought up awful memories of being abused as a McDonald’s employee.

That predictably sparked a call for better pay.

“Perfect example as to why fast food workers need to be paid above the minimum wage,” wrote @calikidvic94.

Another user stated the obvious.

“And you wonder why people don’t want to go back to work for minimum wage?” @Konabean328 wrote.

If there’s a silver lining to the pandemic, it’s that it has forced many of us to rethink our priorities. Namely, what our dreams are, where we want to live and what work we want to do.

As a result, you see droves of fed-up fast food employees deciding not to return to their low paying jobs.

In fact, there’s such a shortage of workers that a McDonald’s in Florida is paying applicants $50 for an interview, and still no takers.

The message is clear:

There’s no place for poverty-level pay.

At this point, it’s no longer a matter of whether those voices are heard. As individuals, we should demand it of our job. As a community, we should support those like the McDonald’s worker in this story for a job that gives — and pays them with — respect.