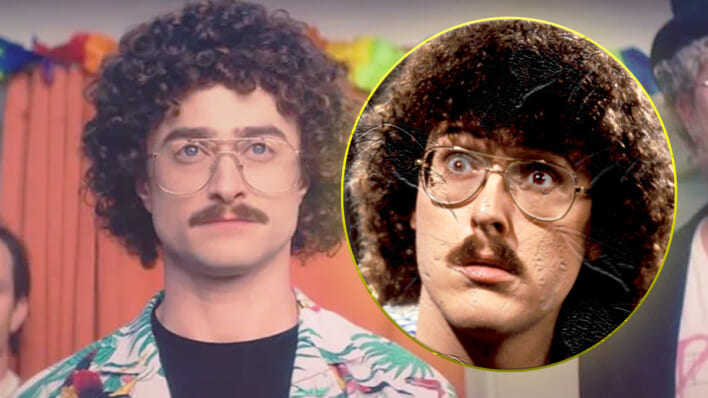 Weird Al Lacks One Key Thing Most Other Stars Have – Could It ‘Ruin’ His New Biopic?

Will Weird Al’s self-proclaimed lack of scandal and controversy make his upcoming biopic a bore?
By Maya Khamala    May 12, 2022

Will Weird Al’s self-proclaimed lack of scandal and controversy make his upcoming biopic a bore?

Alfred Matthew “Weird Al” Yankovic, known to the world simply as Weird Al, has been creating wacky musical parodies of other artists’ songs and making audiences laugh their butts off since the mid 1970s.

From his outlandish 1984 performance of “Eat it,” a parody of Michael Jackson’s “Beat It”; to his 2006 performance of “White and Nerdy,” a parody of “Ridin” by Chamillionaire and Krayzie Bone; to “Like a surgeon,” which parodies Madonna’s “Like a Virgin” — and many other timeless classics —Weird Al has always had an incredible talent for satirizing and celebrating in equal measure, and that’s why his fans love him. Not to mention, he’s a talented musician in his own right, brandishing his infamous accordion everywhere he goes.

However, one thing sets Weird Al apart from other musicians, and it may change what people can expect from his new biopic — starring Harry Potter‘s Daniel Radcliffe, of all people, in the title role.

The ‘Weirdest’ Thing about Weird Al’s Career Is… Being Wholesome?

In addition to parodying existing songs, Weird Al also performs original tunes that are a sort of style collage of other acts, along with polka medley versions of famous tunes, most of which feature his signature accordion.

As of 2007, he had sold 12 million+ albums, recorded 150+ parodies and original songs, released 50+ music videos, and performed thousands of live shows. His body of work has earned him five Grammy Awards (and another 11 nominations), four gold records, and six platinum records. His most recent album, Mandatory Fun (2014), incredibly became his very first number-one album—and during its debut week, no less.

Perhaps best of all, Weird Al, 62, is still kicking in 2022. Just last month, the comic maestro kicked off his latest concert tour, The Unfortunate Return of the Ridiculously Self-Indulgent, Ill-Advised Vanity Tour — set to be a follow-up to 2018’s Ridiculously Self-Indulgent, Ill-Advised Vanity Tour. The current tour, which boasts nonstop appearances throughout the US (and some in Canada) runs until late October and is said to consist mostly of his original, non-parody songs.

If that wasn’t enough, there’s the aforementioned satirical biopic about his life, set to be released on The Roku Channel this fall. Weird: The Al Yankovic Story, is written and produced by Yankovic himself and stars Daniel Radcliffe as Weird Al. If that casting choice alone doesn’t make you want to see this thing, you just might be the odd one out.

Still, given that Weird Al has built his career on relentless positivity and celebratory entertainment devoid of any palpable controversy or scandal (or nudity) over the years, and given that we humans love to dish the dirt (and look at filth, occasionally), there are some who question whether his upcoming biopic will be a hit or a flop.

After all, Johnny Depp and Amber Heard’s names are nowhere to be found in the credits. And Nicki Minaj wasn’t asked to dance. Unless you count Radcliffe playing Weird Al playing a parody of Sylvester Stallone’s Rambo character — while donning an oiled-up muscle suit — word on the street is that audiences shouldn’t expect too much sex or drugs from Yankovic’s upcoming flick. But there’s sure to be plenty of rock and roll… or at least, rock and polka.

Will Weird Al’s Notorious Lack of Scandal ‘Ruin’ His Biopic?

Given Weird Al’s amazing talent for satirizing and celebrating — without mocking anyone or showing any bare booty — there’s always been a striking lack of salaciousness about him. Anyone who caught his 1999 episode of Behind the Music understands this. In it, he expresses bafflement as to why he would even be considered for the series given his clear status as controversy-free.

RELATED: Why Daniel Radcliffe and Erin Darke Are Hollywood’s Most Down-to-Earth Couple

But could this self-proclaimed lack of scandal or controversy, and the betrayal/intrigue/offense that go along with them, potentially “ruin” Weird Al’s satirical take on the biopic, somehow? Will it, in essence, be less than interesting? Really, of course, this question is more about humanity than it is about the upcoming film.

It’s certainly worth noting that an absence of scandal has hardly prevented four decades’ worth of Weird Al’s hilarious yet non-scandalous content from breaking into mainstream popularity. On the contrary, Weird Al has consistently managed to subvert expectations and come out on top—laughing, no less.

Weird Al Continues to Subvert Expectations – So Will His Biopic

Judging from the biopic trailer in which the focus seems to be a hearty, off-kilter laugh at his own expense, Weird Al is indeed poised to subvert the narrative of the “tragic biopic,” yet again redefining entertainment as we know it.

The official synopsis of the biopic adopts an extra tongue-in-cheek tone: “The biopic holds nothing back, exploring every facet of Yankovic’s life, from his meteoric rise to fame with early hits like ‘Eat It’ and ‘Like a Surgeon’ to his torrid celebrity love affairs and famously depraved lifestyle. WEIRD: The Al Yankovic Story takes audiences on a truly unbelievable journey through Yankovic’s life and career, from gifted child prodigy to the greatest musical legend of all time.”

Much like the late comedian Mitch Hedburg, known for his weirdly innocent, observational humor, Weird Al’s approach to getting a laugh is refreshing because it’s funny on its own merit, without the need to mock or degrade or betray. It might even be considered innocent if it wasn’t so off-the-wall, and unexpected. Though perhaps it does enjoy a certain brand of campy innocence—likely, it depends who you ask.

Ultimately, Weird Al’s special strain of guiltless goofiness may just be what sets him apart, and indeed, why his fans love him. Perhaps that’s also how he continues to draw new fans into his wacky world even after all these years.