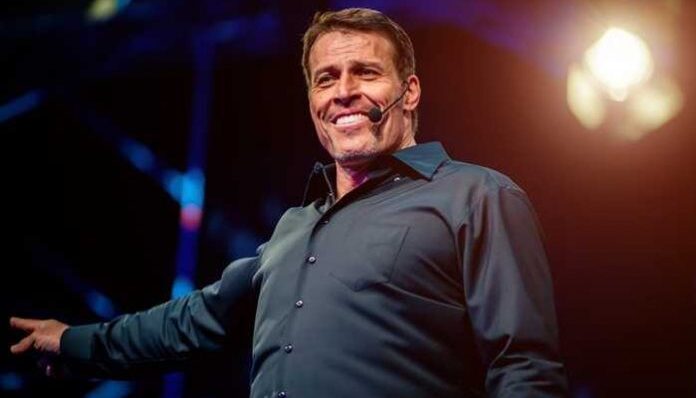 For the past several decades, business and performance coach Tony Robbins has provided insight and knowledge to people all over
By Matt Valentine    May 26, 2018

For the past several decades, business and performance coach Tony Robbins has provided insight and knowledge to people all over the world who want to transform their life and reach peak performance.

Robbins is known for his commanding stage presence, his energy infectious and intensity almost at times abrasive. It’s hard to believe that anyone could maintain this level of energy and intensity in their daily life.

But, as it turns out, it’s not an act– that’s exactly how Tony Robbins lives.

For changes to be of any true value, they’ve got to be lasting and consistent.

A day in the life of Tony Robbins

What does a day in the life of Tony Robbins look like?

Recently, Robbins has been more open about his daily schedule, much of it being chronicled in Robbins’ 2016 Netflix special I Am Not Your Guru.

Business Insider also recently followed Robbins for several days at his Fiji resort, Namale, experiencing every detail of a typical day for Robbins.

At 57, Robbins works harder than ever. He travels to over 60 different countries a year and owns 33 companies, 12 of which he runs directly. And, while each day is different, there are several factors that are consistent for Robbins no matter where he is and what he’s doing. Robbins is known for working long, 16-hour days and sleeping no more than three to five hours a day.

Typically waking between 7 to 9 A.M., he starts his day with a version of the very same exercise he details in his Ultimate Edge program. It’s a short, 10-minute ritual that combines elements of yoga, mindfulness meditation, visualization, gratitude, and affirmations (what Robbins prefers to call incantations).

After working out, Robbins will spend a few minutes in a hot sauna immediately followed by jumping into a cold bath, the water reaching as low as 57 degrees Fahrenheit. Beck says the cold bath not only helps wake Robbins up, it also improves circulation.

According to Beck, Robbins meal plan is as follows: The brunt of Tony’s daily work consists of his events and speaking engagements.

However, before we go much further, it’s important to understand something about Tony’s daily life. He’s surrounded, almost at all times, by his direct team which consists of as many as 10 people.

His team flies with him in his private jet, a Bombardier Global Express XRS, everywhere he goes and is a big part of virtually everything he does.

His team consists of his:

Much of Robbins’ work consists of meeting with his team to plan, manage, and run his various events as well as leading and managing his other businesses and investments. His wife Sage also travels with him everywhere he goes and actively engages in many of his events.

Before a big event such as Robbins’ Date with Destiny, he’ll meet with his team to prepare and review notes to make sure everything is in order. He then meets with various members of his team throughout each day during events, which can often have him speaking with his audience from as early as 9 A.M. to as late as 1 A.M., to adjust the event as necessary when certain activities run over time, which happens often when Robbins speaks directly with attendees during his intervention sections.

After each day, he meets again with his team to discuss how everything went so they can gauge performance and make necessary adjustments. Robbins does this each and every day, whether there’s an event or not, before going to bed between 2-4 A.M. on a typical day.

In his off time

In his off time, Robbins enjoys spending quality time with his wife Sage and schedules time to be with his family including his four adult children, siblings, and his wife Sage’s family as well.

Robbins also enjoys playing golf at his Fiji resort and has been an amateur race car driver since his twenties. However, with a passion that is as awe-inspiring as it is rare, he doesn’t stay away from his work for long.