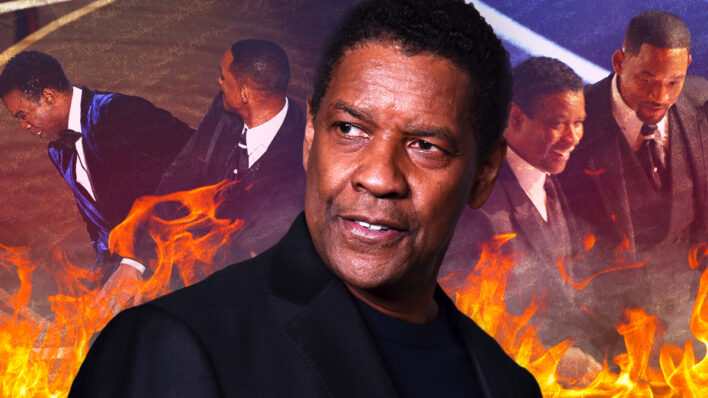 What the ‘Devil’ Did Denzel Tell Will Smith at the Oscars (And Why You Need to Hear It, Too)

Will Smith’s fellow Oscar nominee provided a phenomenal piece of advice in his darkest hour — does this apply to everyone regardless of circumstance?
By Shaoni Das    April 7, 2022

Will Smith’s fellow Oscar nominee provided a phenomenal piece of advice in his darkest hour — does this apply to everyone regardless of circumstance?

It was the slap seen (and heard) around the world.

The recent Will Smith Vs. Chris Rock altercation has been dissected to no end, with everyone poring over the incident — trying to uncover the most controversial takes, whipping up the most hilarious memes, and crafting the most profound think-pieces — just to add fuel to the fire.

In many ways, everything that can be said has been said, such that it’s become a game of patience and observation to see how the consequences pan out. How will the controversial moment impact the future of award ceremonies and live entertainment? To what extent do we as a society condone, if not justify, violence? Is violence ever acceptable when it comes to protecting your loved ones? Are there some lines even comedy can’t cross?

RELATED: Jada Pinkett Smith Reveals Her Take on Will Smith’s Oscars Slap – And It’s Not What You Think

Yet there is one aspect of the situation that’s still relatively under the radar as far as public opinion is concerned: Denzel Washington’s advice to Will Smith. The Tragedy of Macbeth actor was the first to take Will aside during the commercial break and impart some wisdom. Denzel’s words impacted Will so deeply that he referenced them in his Best Actor acceptance speech later that evening.

Let’s take a closer look at Denzel’s astute piece of advice and ask ourselves if it applies to our own lives as well.

What Did Denzel Washington Tell Will Smith after He Slapped Chris Rock?

While accepting the award for Best Actor at the 94th Academy Awards, Will Smith remarked on what Denzel had said to him in the wake of his violent outburst. “Denzel (Washington) said to me a few minutes ago, he said, ‘At your highest moment, be careful. That’s when the devil comes for you.'”

In essence, the adage boils down to a simple contradiction: when you’re at your strongest, you’re also at your weakest, becoming inherently more ‘vulnerable’ to the devil (or your own hubris) preying on your worst impulses.

Religious connotations aside, Denzel asked Will to calm down, take a moment to collect himself, and let go of the temper that blinded his senses. With Denzel’s instruction, Will was able to reflect on his action, which he explained was driven by his need to “protect” his circle. Will also drew an analogy to the film performance that brought him up to the stage in the first place, saying, “Richard Williams was a fierce defender of his family.” He, too, felt like he was “called upon” by God to be a “vessel for love,” to step up to the mantle and insulate his loved ones from scrutiny and judgment.

RELATED: What Will Smith’s Oscars Slap Reveals about Anger, Patience and Responsibility

Violence is never the answer, and there is no valid justification for what Will did to Chris Rock. However, as much as we want to move away from violence as a conflict resolution method, it’s also an inevitable part of everyday life. Tempers will flare, fists will fly, and people will be hurt. And yet, instead of letting those flashes define our journey, we need to be able to regain our composure, investigate why we did what we did, and figure out how we can improve our disposition to ensure that it doesn’t repeat.

In relation to Denzel’s phrase, Will Smith was experiencing his highest moment: a front seat at the grandest showbiz affair of the year, primed to win his first Oscar, receiving accolades left, right and center. It’s during this euphoria that you start to bite off more than you can chew, mentally and emotionally.

Why Denzel Refuses to Condemn Will Smith for His Oscars Slap

Post-Oscars, Denzel elaborated on the lesson he delivered to Will in the latter’s moment of darkness. “Well, there’s a saying when the devil ignores you, then you know you’re doing something wrong,” he said, as per Hello magazine.

You know, the devil goes, ‘Oh, no, leave him alone, he’s my favorite. Don’t bother him.’ Conversely, when the devil comes at you, maybe it’s because you’re trying to do something right. And for whatever reason, the devil got a hold of that circumstance that night.

Denzel’s statement may be misconstrued to absolve Will of individual culpability, but if you dig deeper, it refers to something that’s far beyond one specific moment. It’s about being cognizant of your surroundings at all times, because the moment you look away, you will crash and burn.

RELATED: The Truth Behind Will Smith and Mariah Carey’s Unexpected Friendship

Who are we to condemn? I don’t know all the ins and outs of the situation, but I know the only solution was prayer.

Denzel, in his assessment of the commotion, doesn’t want to play the blame game. His primary focus was to offer Will a helping hand in his time of need. He fulfilled his duty and didn’t bother with providing his own opinion on the matter. “Who are we to condemn? I don’t know all the ins and outs of the situation, but I know the only solution was prayer,” he said to Hello Magazine. He also said he wasn’t the only one reaching out to Will in the wake of the slap; others like Tyler Perry, Bradley Cooper and Will’s own publicist jumped to comfort him as he cooled down from the confrontation.

Will Smith eventually apologized for his behavior and ended up resigning from the Academy of Motion Pictures. As we move away from this ordeal, we need to remember how even the brightest stars can come crashing down at a moment’s notice. Instead of slamming Will as he’s going through his darkest period, we need to act with empathy and be aware that it could happen to any one of us. Nobody is impervious to anger: it will descend on anyone without warning, and we’ll be left to fend for ourselves.

Learn from Denzel and Will Smith: Never Take Composure for Granted

You might think of yourself as a generally upbeat, non-violent person who could never walk across the stage to slap someone on national television, but you never know when the devil could grab hold of you. Your composure is intact one moment, but the next, it could come apart, and you might not be ready to deal with the consequences.

RELATED: 20 Will Smith Quotes That Will Inspire You

Denzel’s advice applies to everyone in the world; instead of judging someone for their crimes, we need to keep an open mind and learn how to empathize. The composure we pride ourselves on isn’t a permanent state of being; it will evolve and change and bend with circumstance. Don’t take your composure for granted because you never know when your anger will get the better of you.