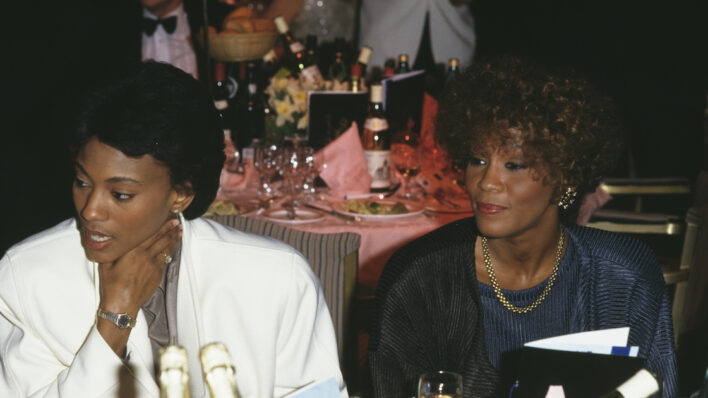 Whitney Houston’s relationship with Robyn Crawford remained a secret for the longest time, until the latter released her memoir and revealed their truth.
By Maya Khamala    January 10, 2020

Whitney Houston’s relationship with Robyn Crawford remained a secret for the longest time, until the latter released her memoir and revealed their truth.

Over 7 years have passed since Whitney Houston’s tragic death. What has since been said about the once unstoppable star has mostly focused on her drug use, her abusive marriage to Bobby Brown, and perhaps most tragically, her 22-year-old daughter’s remarkably similar drug-induced death only three years following hers.

To Whitney’s longtime friend and personal assistant Robyn Crawford, it became increasingly important to paint a fuller, truer picture of the late pop diva. In November 2019, she finally broke her decades-long silence with the publication of her memoir, A Song For You: My Life with Whitney Houston.

“I’d come to the point where I felt the need to stand up for our friendship. And I felt an urgency to stand up and share the woman behind the incredible talent,” she told People. In her introduction to the memoir, Crawford further explains the motivations behind her decision to write their story.

In the nineteen years since I left Whitney’s company I have been pursued relentlessly to share my story. And since her death and that of her daughter, I have been saddened and frustrated by the way she and her legacy have been misrepresented.

The book has received a lot of attention for its many revelations, especially its disclosing of the romantic relationship between the two women, who met all the way back in 1980, when Houston was barely 17 years old and Crawford 19.

Robyn and Whitney refused to label their relationship

While many have gasped at the reveal of this romantic/sexual relationship between Crawford and Houston, it is but one element in a far more complex story. Robyn’s account is the story of two women who hid the original nature of their relationship for Houston’s entire life, often despite intense speculation.

Robyn details how she was harassed and even threatened with violence by Whitney’s family. Whitney went along with it, while in private, she would tell her, “Robyn, you know I love you immensely.”

Before you start resenting Whitney, it is important to understand that both women were raised in ‘God-fearing’ households, back when, as Robyn puts it, “you were either this, or you were that.”

Even in private, they resisted acknowledging what was really going on:

We never talked labels, like lesbian and gay. We just lived our lives, and I hoped it could go on that way for ever.

Ultimately, their sexual relationship was short-lived, when, at the age of 19, Houston signed her first contract with Arista Records. In her book, Robyn describes how her friend handed her a Bible and told her they had to quit having sex, because “if they found out – because her career was taking off – they’d use it against us.”

Robyn went along with this, and the women’s friendship went on to span another two decades, largely because Whitney hired her as her assistant as soon as she could and the two moved in together.

A story of romantic survival

Robyn admits it was incredibly challenging when Whitney started dating Jermaine Jackson in the mid-80s, then Eddie Murphy, and later Bobby Brown, whom she married.

According to Robyn, Brown would sometimes yell at her, and Whitney would take his side. “A lot of the physical stuff that Bobby did [to Whitney] was when I wasn’t there,” she reveals. She finally realized her friend’s public support of Brown was a survival mechanism.

Behind closed doors, she knew how he could behave. So if he’s out in the open creating a scene, you want to defuse it. And she didn’t like to embarrass people.

Surprisingly, in 2016, Brown himself confirmed Whitney’s relationship with Robyn, alleging his former wife’s bisexuality in his own memoir, a label Houston denied throughout her lifetime.

He went on to say that her death could have been avoided with Robyn’s help: “I really feel that if Robyn was accepted into Whitney’s life, Whitney would still be alive today … She didn’t have close friends with her anymore.”

A terrible chapter in their life

Robyn Crawford’s memoir is an account of the larger than life story of an extraordinarily talented artist who found herself in the middle of an increasingly negative whirlwind of personalities and interests as she grew more successful.

According to Crawford, when they met as teenagers, Houston had already used drugs and confided in her new friend about trying cocaine at 14-years-old. The two actually often did drugs together, but Robyn eventually tried to talk her into quitting.

In 1988, Robyn told Whitney’s mother, Cissy, that her daughter needed help for her drug addiction. She was ignored, probably due to the family’s hostility regarding her closeness with Houston.

“Whitney knew she needed to help herself and wanted to do that,” Crawford told BBC.

Despite Robyn’s overarching account of her and Whitney’s reciprocated and unshakeable bond—one in which they looked out for one another—the Houston family’s hostility towards her eventually saw her barred from business meetings.

In 1997, after years of touring with Whitney, she was shut out of a 10-date tour. Eventually, 20 years after the women’s first meeting, Robyn finally quit. When Whitney Houston passed away in 2012, Crawford was living in rural New Jersey with her wife, Lisa Hintlemann, and their two adopted children. She had not spoken to Houston in years. Her wife had encouraged her to seek therapy, which she did.

However, long after she got married and had children, Crawford still felt at times that she could get sucked back in. Part of her stated purpose in writing her memoir was to celebrate the original energy between her and her closest friend.

We were young, and fearless, and free. … I wanted to lift her legacy, give her respect and share the story of who she was before the fame, and in that, to embrace our friendship.

Her book also includes little anecdotes that provide true Whitney-lovers with a rare glimpse of the way the star used to navigate the world. For instance, the superstar was a homebody, liked to sleep late, loved cereal, and was a sucker for swimming at the beach.

While Robyn Crawford’s memoir is a step towards healing from the loss of her late friend and lover, it is also a celebration of their authentic connection that was unfortunately not allowed to flourish. Circumstances and individuals prevented the two women from living their truth and helping each other on their path.

This is why it is important to cherish the authentic relationships we have in our lives, the ones that are not based on superficial things like money or benefits. When we make space for people who genuinely want the best for us, we can only protect ourselves from the type of people who can be detrimental to our wellbeing.