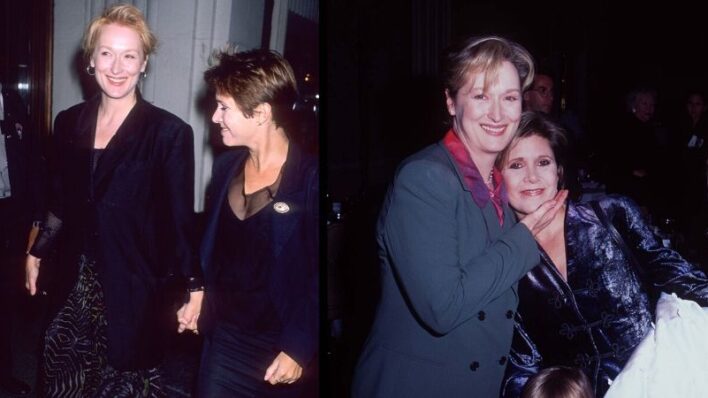 Carrie Fisher and Meryl Streep came from two completely different backgrounds but that did not stop them from becoming friends and supporting each other.
By Kerri Flanagan    December 20, 2019

Carrie Fisher and Meryl Streep came from two completely different backgrounds but that did not stop them from becoming friends and supporting each other.

Carrie Fisher and Meryl Streep are both icons in their own right, and have both enjoyed immeasurable professional success. But in terms of personality, you might think they were from completely different worlds.

While die-hard Star Wars fans may see her as inextricable from her character Princess Leia, she was indeed from Earth, although her life on this planet was quite singular.

From an outsider’s perspective, her wild child persona and troubles with mental health and addiction could have made a friendship with the more staid, straight-laced Streep unlikely.

However, the actresses defied the odds and managed to dig a little deeper within themselves to find common ground in women’s advocacy, loss, and above all, humor.

Carrie and Meryl’s road to finding each other

Carrie’s life was everything but ordinary

Carrie Fisher’s early life was more than a little unconventional. Born to America’s Sweethearts at the time, actress Debbie Reynolds and singer Eddie Fisher, she was thrust into the spotlight mere hours after coming into the world.

Then her father famously ran off with Elizabeth Taylor when Fisher was only 18 months old. After the event, her mother turned to drinking to cope with the loss. Reynolds’ work also kept her away for much of Fisher’s childhood.

Carrie’s mother spent a lot of her time at home sleeping, or becoming Debbie Reynolds the movie star, applying lipstick and rouge and false eyelashes, as Fisher recalls in her memoir, Wishful Drinking. What little time she had with her mother, she was forced to share with the world, and she didn’t like it.

Fisher started experimenting with drugs at the age of 13, first with marijuana. Then, when the highs started becoming dark and scary, she found substitutes in painkillers, hallucinogens, and cocaine.

While her unstable childhood could very well account for her penchant for drugs, Fisher claimed she used as a means of moderating what would turn out to be bipolar disorder, an affliction she inherited from her absentee father.

After an overdose in 1985 Fisher to rehab, and incited her to write her seminal, semi-autobiographical novel Postcards from the Edge, which she would later adapt into a screenplay. Eventually, it would be made into the 1990 movie of the same name, starring the legendary Meryl Streep.

You could not find an actress with a more opposite background to Fisher’s if you tried. Raised in New Jersey, as far away from Hollywood as possible, in a loving, supportive, stable household, Streep credits her mother for instilling confidence in her and fostering the belief that she could do anything and be anyone if she was willing to put in the work.

And she did. She completed an MFA at the Yale School of Drama, and eventually became the actor with the most Oscar nominations in history. And all this without so much as a stain on her record.

In fact, in an appearance on 92y in 2000, Streep talked about preparing for her role as Carrie Fisher’s alter ego, Suzanne. “I did take one illegal substance,” she says coyly to a tittering audience. “But that was an important part of the research.”

The friendship that would change their lives

“She and I became, and still are, very good, close friends,” Streep goes on to say of Fisher. The friendship between the two women may have blossomed through a mutual refusal to cast judgment.

When Streep married her current husband, sculptor Don Gummer, only six months after Cazale’s death, she faced a wave of anger and resentment from friends and family — even from her own mother. Just as Streep did not hold Fisher’s addictions against her, Fisher would never have batted an eye at her friend’s unorthodox decisions in her quest for happiness.

“No one is good or bad – but a hearty mix of both,” Fisher has said. “And sometimes life actually gives to you by taking away.”

In fact, the two actresses might have bonded over their experiences with loss. Fisher’s of her father – and subsequently her mother, to an extent – and Meryl’s of her first husband, actor John Cazale, to lung cancer.

Perhaps Fisher’s irreverent sense of humor and inclination to shine a light on the dark, ugly side of life with candor and wit (“I’m Joan of Narc, patron saint of addicts,” she’d quip) was a kind of balm to the more introverted Streep.

Fisher’s free-spirited nature and unrelenting yet wry positivity clearly struck a chord with Streep, who quoted the late Fisher during her Cecil B. DeMille Award acceptance speech at the Golden Globes in 2017.

As my friend, the dear, departed Princess Leia said to me once, take your broken heart, make it into art.

The two women also shared a passion for women’s rights and equality. Princess Leia was “the ultimate survivor”, per The Independent. “Stripped of everything and yet, still, she blazed on. She never bowed down to fear, never to grief or hopelessness.”

Whether it was Leia who influenced Fisher or vice-versa is anyone’s guess, but it is clear the character and the actress who portrayed her shared similar traits. Fisher talked and wrote at length about her struggles, a brave act in an industry that thrives on exposing one’s flaws, especially when it comes to women, for whom even aging is taboo.

Streep is also a force to be reckoned with, championing for equal opportunity for women not only in Hollywood, but all over. She recently starred in the movie Suffragette, about women’s fight for the right to vote, and has been a vocal supporter of the Equal Rights Amendment.

As she stated in her speech at the 2016 Women in the World Summit in New York City, “women are in the world now and we will not be bullied”. Fisher would surely have been proud.

A broken heart, and a happy farewell

After Fisher’s untimely death in December 2016, Star Wars fans and everyone at Lucasfilm, from writers, executives and costars, were devastated. But, as they say, the show must go on.

Some fans started a petition to have the role of Leia played by Streep for the final installment of the Star Wars sequels. It gained traction, garnering almost 9,000 signatures, and rumors of the recasting started flying.

And, let’s face it, if anyone else in the world was going to play Princess Leia, you couldn’t find a more appropriate actress than her dearest friend. However, a rep for Streep shut down the rumor mill, and Fisher was ultimately written out of the script.

“The women I have played in the movies and in the theater have all felt like me to me,” Meryl explained in a talk at Princeton University. Surely the role of Leia could never feel like anyone but Fisher.

Their friendship inspires us to look beyond difference

Streep and Fisher found in each other a common love for womankind, and a desire for the betterment of the world for women through writing or acting. Most of all, they found inspiration, to live life with humor, and to never give up the fight for happiness.

Streep is said to have sung Fisher’s favorite song at her memorial, “Happy Days are Here Again”. And while she may not have felt it at the time, she followed her dear friend’s advice. She took her broken heart, and sang.

The unlikely friendship between these seemingly opposite women is living proof that diversity of life experiences can create a beautiful unity, and that one is never too far from understanding another. We simply have to love and accept people for who they are.