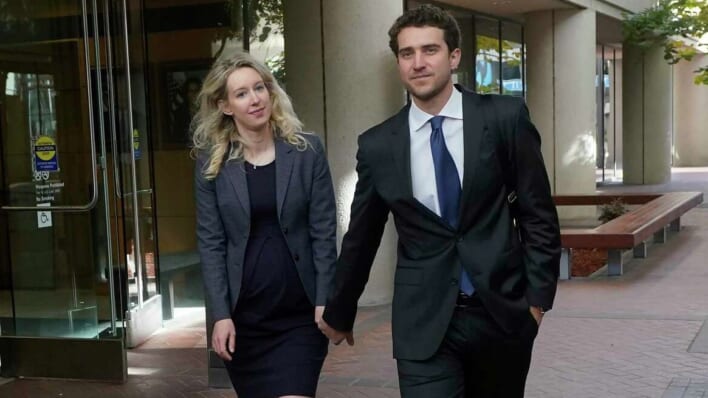 Elizabeth Holmes Faces 20 Years in Prison, Her Husband Stands by Her – Who Is Billy Evans?

Why the hotel heir’s marriage to the disgraced biotech mogul has turned heads.
By Steven John    November 5, 2022

Why the hotel heir’s marriage to the disgraced biotech mogul has turned heads.

For a few years in the 2000s and 2010s, Elizabeth Holmes seemed like one of the most impressive people in America. Born to accomplished parents — her father was an energy company executive, her mother held several roles in government — Holmes attended Stanford University, where she studied chemical engineering.

Then, in 2003, at not yet 20 years old, Holmes founded a company called Real-Time Cures, dedicated to maximizing the range and efficacy of medical tests that could be conducted using only a small sample of blood. That same year, she founded Theranos, the company that transformed her from a heroine of Silicon Valley, and, arguably, the American medical scene to a convicted felon

RELATED: 25 Wise Quotes About Failure (and Coming Back Stronger Than Ever)

The company promised a new approach to medical testing. Over the next decade, Holmes dramatically built up Theranos, with an amazing roster of directors, raising billions in investments, and securing blood-testing deals with national pharmacy chain Walgreens.

But after whistleblowers worked with a team secretly investigating the company, it was discovered the technology Holmes promised … didn’t actually work. Worse, it quickly came out that Holmes had known as much all along. As smart and ambitious as she may have been, Elizabeth Holmes was a fraud. By 2015, it began to catch up with her.

In late 2015, a Wall Street Journal published an article that exposed Holmes and Theranos. By early 2016, the company was shedding investors and losing deals, and Holmes was largely banned from the medical industry. In 2017, the lawsuits began, initially on the state level. Then, in 2018, Holmes was charged with fraud by the Securities and Exchange Commission. She faced worse than disgrace and a loss of equity: two decades in prison.

That makes it all the more surprising that, in 2017, Holmes met her future husband, Billy Evans. Their relationship blossomed the following year.

Billy Evans has been Elizabeth Holmes’ partner since 2017. Evans was born in 1993, the son of the family behind the San Diego-based Evans Hotels. The chain was founded in 1953 by Billy Evans’ grandparents, Anne Evans and William D. Evans.

RELATED: Who Is Adele’s Boyfriend? Here Are the Interesting Things to Know About Rich Paul

Growing up in San Diego, Billy attended the prestigious Francis Parker School, before graduating in 2015 from MIT with an economics degree.

While Evans had been manager of special projects at Luminar Technologies, he seems mostly to have enjoyed the playboy life before he met Holmes. He usually dated Instagram models in quick succession, rather than in dedicated relationships.

But that all changed, somewhat inexplicably, in 2017, when Evans and Holmes met at a party. Recall that, by that year, Theranos was already falling apart, and taking Holmes with it. She was then in her early 30s, and Evans in his mid-20s. By all logic, the pair should have had no interest in one anther, based on their pasts, and Holmes’ circumstances. But they bonded quickly, even as things grew worse for Holmes in a legal and personal sense.

In early-summer 2018, Holmes was formally indicted by a federal grand jury. Yet, later that summer, photos revealed she and Billy Evans attended the Burning Man festival, seemingly concerned by the troubles ahead. By 2019, Elizabeth Holmes and Billy Evans were reported to be engaged.

Today, it’s widely accepted that Holmes and Evans are married. However, they reportedly wed in a private ceremony, and some still doubt whether they’re married in a legal sense. Nevertheless, Billy Evans is typically regarded in news reports as Elizabeth Holmes’ husband.

Initially, Billy Evans’ family and friends were shocked he was dating the seemingly toxic Elizabeth Holmes. His family worried he had been all but “brainwashed” by the disgraced biotech executive. Evans’ friends even staged a sort of intervention of sorts. But the relationship only grew, and those in Evans’ orbit eventually had to accept it.

RELATED: Who Is MacKenzie Bezos? Jeff Bezos’ Ex-Wife May Become the Richest Woman in the World

Today, the two live in a mansion near San Francisco, and have one child, William Holmes Evans, born in 2021. That birth helped to briefly delay Holmes’ trial.

What’s Next for Elizabeth Holmes?

Holmes was convicted in January 2022 of three counts of wire fraud, and conspiracy. Her sentencing is scheduled for Nov. 18, 2022, when she faces up to 20 years in prison.

RELATED: The Real Tinder Swindler: Who Is Simon Leviev and Where Is He Now?

In early November, a judge denied Holmes’ request for a new trial, following claims that ex-Theranos employee Adam Rosendorff had expressed regret for his testimony. However, returning to the stand, Rosendorff reaffirmed the truthfulness of his statements about Holmes.

That means Nov. 18 remains a day of reckoning for Holmes, who, as the New York Post noted, appeared pregnant at an October hearing. It’s likely she will face at least some time in prison, and for her long, complicated and willful deceit.

Who Is ‘Inventing Anna’ Based on and Where Is She Now?