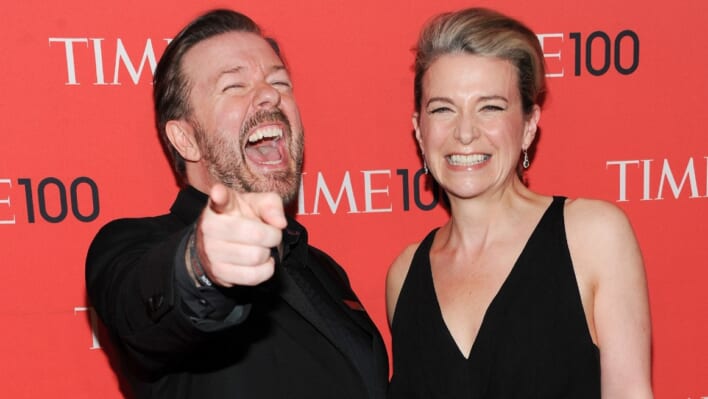 The English comedian’s reasons for not tying the knot with his longtime love reveal his soft side.
By Shaoni Das    November 19, 2022

The English comedian’s reasons for not tying the knot with his longtime love reveal his soft side.

Love him or hate him, he’s never playing by anyone else’s rules.

Ricky Gervais is undeniably one of the most prominent, valuable personalities in the entertainment scene. His wry, blunt sense of humor has been known to irk the elite ranks of the industry as well as regular folk, but there’s absolutely no possibility he’ll ever change his material to appease their concerns. He has spent 30+ years establishing himself as one of the most controversial forces in comedy, someone who will acutely observe his surroundings and describe them in the most objective, unfiltered way. It doesn’t matter whether his jokes land with the audience; as long as he’s 100% his authentic self, he’ll manage to endear himself to some people nonetheless.

RELATED: Kaley Cuoco Has Sworn off Marriage for Good – Why That’s a Great Thing

As it turns out, Ricky Gervais’s unorthodox method extends to his personal life as well. The comedian has been with English author and television producer Jane Fallon since 1982. With forty years under their belt, you’d expect the couple to be happily married with a couple of grown children; however, Gervais and Fallon never tied the knot and have no plans of doing so.

Gervais refusing to go through an official nuptials with Fallon is not a gimmick. Indeed, it’s a thoughtful and ultimately sweet measure that speaks volumes about the strength of their partnership.

In essence, Gervais and Fallon couldn’t have had a more romantic beginning.

Ricky Gervais Reveals How He Met His Girlfriend Jane

They stumbled across each other’s paths in the early 80s as students at University College London. Recalling their first meeting, Gervais said they were introduced by a mutual friend, and then he met her separately at their college disco. It was an “adventurous” first date, and the pair moved in together shortly thereafter.

Though they felt madly in love, they had a hard time making ends meet.

At one point, as per Fallon, they had to live above a brothel because that’s all they could afford. “We went through a good few years when we had absolutely no money, and I’ve talked about this before – the brothel we lived above in Kings Cross,” she said. She added that their destitute years kindled a collective hunger for success, and that’s why they commenced a creative journey that continues to this date. “I always knew I had a plan to build up a career and I think once you do that it does mean a lot more because you’ve worked for all of it,” said Fallon.

Obviously, those needful years are far behind them: their net worth is approximately $240 million as of 2022. You’d think that their financial prosperity would have changed their mind about marriage and children at some point over the last 40 years, but that’s never been the case. Both Fallon and Gervais have always been of one mind about the subject, and that’s not to change anytime soon.

Speaking to The Times in 2010, the 61-year-old stated that just because they haven’t officially sealed the deal, it doesn’t make their connection any less valid. “We are married for all intents and purposes, everything’s shared and actually, our fake marriage has lasted longer than a real one,” he said. He “[doesn’t] see the point” in marriage, but that’s less to do with what he feels about Fallon and more to do with how the institution is perceived at large.

We’re lucky to be living in a time when people aren’t forced to get married just to legitimize their romantic or sexual relationship. They don’t have to sign those papers because there is an unborn child in tow or perhaps their families want to strengthen an alliance. In contemporary times, at least in theory, people walk down the aisle only because they want to, not because it’s the right thing to do.

Gervais and Fallon have managed to build a strong, profound union that’s as beautiful as any legal forty-year marriage. Also, Gervais’s own religious viewpoint, or lack thereof, may have influenced his decision. “There’s no point in us having an actual ceremony before the eyes of God because there is no God,” he told the outlet. Additionally, he doesn’t want to go through the elaborate fanfare of a fancy ceremony that only serves to inflict stress and pull the family to pieces. “We don’t want any more toasters; we never want our families to meet; that would be terrible,” he said.

What Ricky Gervais And Jane Feel About Children

As for children? Both Gervais and Fallon see eye to eye in this area, as well. “Too much hassle. Not something either of us wanted to do,” said Gervais. It’s a responsibility neither of them “fancied” too much as they went through the years. “We just … didn’t fancy dedicating 16 years of our lives. And there are too many children, of course,” said the star of Netflix’s After Life.

Fallon, for her part, also said that she could never imagine herself as a mother, even when her peers undertook the journey themselves. “I’ve never regretted not having kids. Even as a child, I found it hard to imagine being a mum,” she wrote in The Guardian.

The Guardian essay also delved into the nuances of her choice: she was too much of a “worrier” to be a good mother. It’s not a decision she took lightly: “I gave it a lot of thought over the years. I wanted to make sure I wasn’t making a terrible mistake,” she wrote. She added that her partner Ricky “felt the same” — not because she’d be a terrible mother or anything of the sort, but because he wasn’t eager to explore fatherhood himself. It helped that both of them had tons of older siblings who became parents way before their time, therefore keeping the “pressure” off of them.

What Their Partnership Teaches Us About Breaking Convention

Gervais and Fallon didn’t pursue the road of marriage or parenthood, but the love among them burns brighter than ever. Gervais, in particular, is so deeply in love with Fallon that he wrote and produced an entire show depicting her hypothetical death and how much grief it would cause him. “I had to think, ‘Well what is losing everything?’ And to me it’s your soul mate, your life partner. So that’s where it came from,” he said on The One Show. He also said that he’d want to die before Fallon, as he could not bear losing her. “I want to go first, which is selfish but I do.”

RELATED: Jada Pinkett Smith Explains Why She and Will Prefer the Term ‘Life Partners’ to ‘Being Married’

Marriage doesn’t automatically guarantee happiness or fulfillment. In this case, Gervais and Fallon epitomize a love that’s far removed from what society often considers acceptable, untarnished from the dogmatic rules associated with marriage. Their passion is unmistakable, their connection unmatched, and the longevity of their relationship speaks for itself. If two people can be happy with each other on their own terms, no one else should have anything to say.