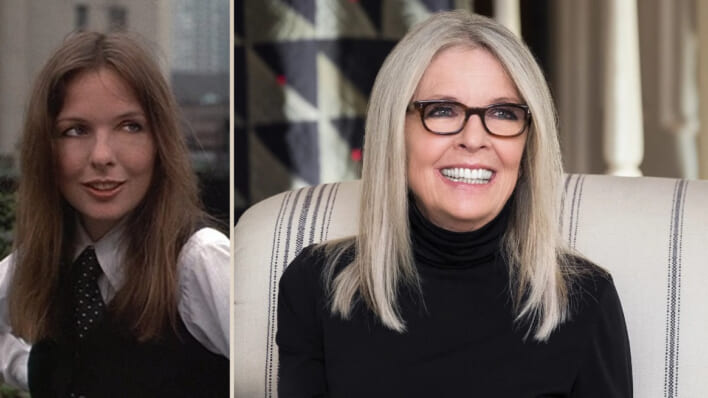 One of Hollywood’s leading ladies has never been married, and her decision is a lesson in choosing your own happiness even when it goes against the grain.
By Rhea Kumar    October 13, 2022

One of Hollywood’s leading ladies has never been married, and her decision is a lesson in choosing your own happiness even when it goes against the grain.

For decades, Oscar-winning actress Diane Keaton has played the leading lady alongside some of Hollywood’s finest actors like Al Pacino and Steve Martin. But beyond the screen, the actress has been vocal about her decision to never marry.

In a series of questions and answers for Interview Magazine where the actress responded to questions from her celebrity friends, Lisa Kudrow asked Keaton why she never decided to tie the knot.

Kudrow, who’s most famous for her role as Phoebe Buffay on Friends, asks Keaton, “Our society has always had an expectation for women to get married, and you’ve said it just hasn’t felt right for you. What informed that feeling?”

The 76-year-old actress traces her decision back to her childhood. She recounted she noticed an unequal dynamic between her parents as a young girl. Keaton felt like her mother chose family over her dreams and that’s why she chose not to get married.

“It goes back to my mother, because, for me, most everything does. I love my dad, of course—that goes without saying—but she was always there, and he was always working. He was working hard, and he was really interesting.”

The actress commended her mother’s sacrifices, and acknowledges that as the oldest of four children, she noticed that her mother chose family over her dreams.

“She had four kids, and I was the firstborn. I saw how much she gave up. I mentioned watching her get that crowning glory and being Mrs. Highland Park. After that, we moved down to Santa Ana, and it was over. There was no more trying things out. I feel like she chose family over her dreams. And she was just the best mother, but I think that she is the reason why I didn’t get married.”

While Keaton dated her fair share of A-List actors like Al Pacino, Jack Nicholson, and Warren Beatty, the actress values her independence fiercely, and also admits that the prospect of marriage never really came up with her partners.

“I didn’t want to give up my independence. By the way, no one has ever asked me to marry them, either, so that might be a good answer. I should’ve started with that and called it a day.”

Despite Diane Keaton’s unconventional (and very un-Hollywood) stance on marriage, her perspective on family shifted later in life. When Keaton’s father passed away, the actress had a maternal awakening and at the age of 50, she decided to adopt.

Though she says her parental decision was late, the actress says it is “the most completely humbling experience that I’ve ever had.” In 1996, she adopted her daughter, Dexter. Then, five years later, at age 55, she adopted her son Duke.

Another reason the actress says she delayed her decision was because she wanted to be in a good relationship. In an interview for People Magazine, Keaton says, “Those good relationships that are strong and substantive never happened for me, and that prolonged my indecisiveness.”

Who Are Diane Keaton’s Children?

Diane Keaton’s oldest child, Dexter, opted not to pursue the Hollywood route like her mother. Instead, Dexter White attended the University of Arizona and has managed to live a private life out of the spotlight (except for some red-carpet appearances beside her mom)!

In October 2021, Dexter married Jordan White and posted some photos of the wedding. Diane Keaton sported her famous white pantsuit and a hat. A source says that Diane made sure not to overshadow her daughter’s special day in any way, and simply wants grandchildren now.

Dexter does keep followers updated on her life through her Instagram account, @mrs.whitenoize. Most recently, on August 11, Dexter White attended her mother’s induction into the TCL Chinese Theatre where Keaton cemented her footprints and handprints into cement during the famous imprinting ceremony.

Also like his sister, Duke Keaton, 22, has chosen to stay out of the public eye. As far as it’s known, Duke enjoys photography, like his mother. Keaton has published many photography books including California Romantica and Reservations.

A Lesson in Following Your Heart

Diane Keaton has always followed her own path. The actress is well-known for wearing pants suits and quirky hats rather than traditional Hollywood garb like gowns and dresses. Her unconventional acting ability and dazzling personality have allowed her to star in some of Hollywood’s most iconic films, including Annie Hall and The Godfather trilogy.

RELATED: Dave Bautista Realized Why He Hated Being Rich – Until He Did One Thing for His Mom

Keaton’s personal life is no different, as she has never paid attention to the status quo. Instead, she created a family on her own terms and followed her heart. Keaton is a beautiful testimonial to making decisions on your own terms and creating your own family.