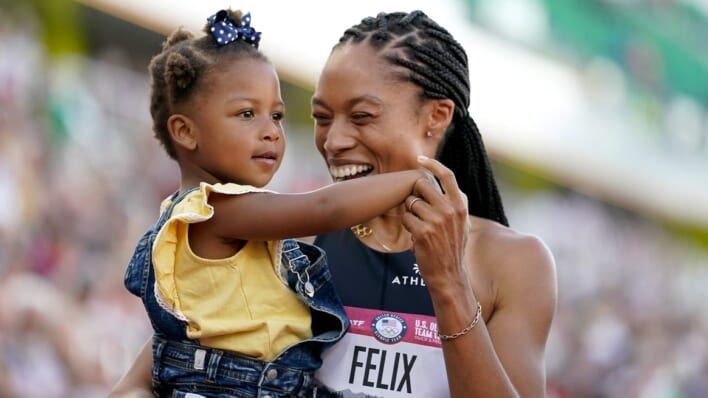 A lack of maternity protections in the US extends far beyond the sports world, but one amazing woman is fighting for moms everywhere.
By Maya Khamala    October 11, 2022

A lack of maternity protections in the US extends far beyond the sports world, but one amazing woman is fighting for moms everywhere.

Some people heard Allyson Felix’s name for the first time back in 2019 when she wrote a New York Times op-ed blasting Nike for maternity policies that didn’t support its sponsored athletes.

This is a woman, an accomplished athlete, and a mother who takes nothing for granted, and demands rights for all working mothers in the US.

Who Is Allyson Felix?

But besides being a badass advocate both for herself and other athlete moms, Allyson Felix, 36—now retired—also happens to be the most decorated woman in Olympic track and field history, according to the International Olympic Committee. She’s also the most decorated American track and field athlete in Olympic history, having earned 11 total medals from 12 finals at five consecutive Olympic Games. If that wasn’t impressive enough, she has also won 19 career medals from World Championships finals to go along with her Olympic collection.

RELATED: Turn Your Favorite Sports Movie Quotes into a Game Plan for Life

When Felix was still a teen, her high school teammates called her “Chicken Legs,” because the five-foot-six, 125-pound sprinter had skinny legs despite her incredible strength.

While not quite the fastest person in the world—that particular accolade remains with Jamaican athlete Ursain Bolt—her bronze medal in the 400 meters at the Tokyo 2021 Olympics set the record for women 35+ with a time of 49.46.

How Allyson Felix Took a Stand for Moms Everywhere

In her famous op-ed, Felix shared a slice of her struggle to secure maternity protections from her longtime sponsor, Nike:

“At 32, I was one of the most decorated athletes in history…but last year, my focus expanded: I wanted to be a professional athlete and a mother. In some ways, that dream was crazy. I decided to start a family in 2018 knowing that pregnancy can be “the kiss of death” in my industry…Despite all my victories, Nike wanted to pay me 70 percent less than before…If I, one of Nike’s most widely marketed athletes, couldn’t secure these protections, who could?”

RELATED: Serena Williams Revealed a Terrifying Issue with Her Baby – And Every Mom Needs to Hear It

For context, the parental leave problem extends far beyond the universe of world athletic championships. Of the world’s richest countries, the US has repeatedly ranked worst, offering a grand total of zero weeks of national paid leave to new mothers.

For those who don’t think one woman’s voice can make a difference, it’s worth noting that following the publication of her piece, a broad public outcry and a congressional inquiry ensued, and Nike finally announced a new maternity policy for all sponsored athletes. The new contract guarantees an athlete’s pay and bonuses for 18 months around pregnancy. Three other athletic apparel companies then followed suit, also adding maternity protections for sponsored athletes.

Allyson Felix managed to advocate for herself as well as moms everywhere—and athletic moms in particular—while coming down off a pregnancy that was anything but easy. In fact, her public advocacy was in part a response to Nike’s refusal to budge on maternity in spite of the difficulty of her pregnancy.

After having undergone an emergency C-section at 32 weeks due to severe pre-eclampsia that threatened the lives of both her and her baby, she nonetheless felt pressured to return to peak performance as quickly as possible after giving birth.

Not only was Nike unwilling to reconsider drastically cutting her pay, but they were also unwilling to contractually guarantee that she wouldn’t be financially punished if her on-track performances dipped in the months before and after childbirth.

“In track and field, the culture around pregnancy was silence. Athletes would either hide pregnancies to secure new contracts, or their contracts were put on hold almost like they had an injury,” she said. “I felt like I was being used in multiple marketing campaigns to tell women and girls that they could do anything when internally I was having such a hardship.”

Now that running is behind her, Felix is working on growing her sportswear startup. After becoming frustrated with Nike’s attitude towards pregnant athletes, she cut ties with the footwear brand.

Rather than approaching another brand for sponsorship, Felix then opted to set up her own sportswear company with her brother Wes Felix. Together they founded Saysh, a footwear brand designed by and for women.

After starting the company, she quickly found out that the challenges facing women in sports extend far beyond sponsorship troubles. For instance, she discovered that women’s running shoes are often made using a shoe mould based on a man’s foot, without taking into account the differences in foot shape.

Saysh has since expanded beyond running shoes into the world of fashion. Not to mention, they recently raised $8m in series A funding.

In June 2022, Felix kicked off an initiative with her sponsor Athleta and the nonprofit group &Mother to provide free childcare to athletes, coaches and staff at the US Track and Field championships.

Having founded the company in response to the inequality she faced as a female athlete, Felix wants her company to embody all those values she sought in a sponsor. In addition to offering free childcare at certain athletics events, Saysh also offers a free maternity returns policy for people whose feet change size during pregnancy.

Felix, Athleta, and the Women’s Sports Foundation have also opened a third round of child care grants, providing female athletes $10,000 for childcare expenses so they can train and compete.

According to Felix, the burden of childcare costs is “the biggest barrier” to women continuing to compete at world championships and other high level events.

Felix on Fighting the Good Fight

“I think society tells us a lot of times you have a child, and your best moments are behind you,” says Felix. “But that’s absolutely not the case. I’m a representation of that…There’s so many women across industries who are out here, who are doing it and getting it done. And I hope that when they watch and they see me, that they see that it’s possible. And without a doubt, we’re going to keep fighting.”

Initially “terrified to speak out,” and unsure how it would be received, Felix sets a great motivational precedent for strong women everywhere. Self-discipline, when coupled with self-respect, is an ultra-potent combination capable of having positive ripple effects far beyond the self—and far beyond athletic world championships.