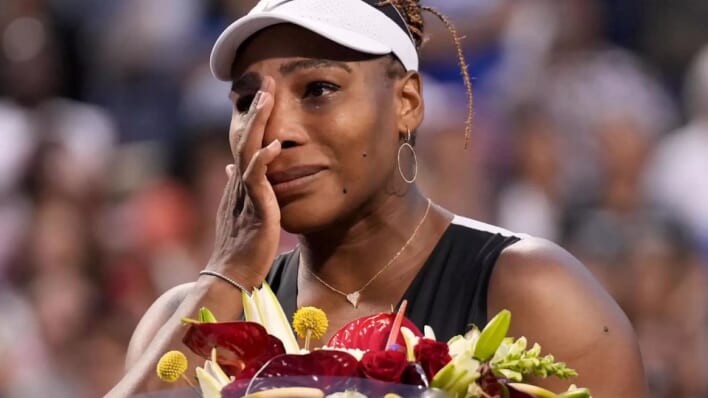 One of the greatest tennis players in the history of the sport decides it is time to “evolve” toward new challenges and a bigger family.
By Laurence Lerman    August 12, 2022

One of the greatest tennis players in the history of the sport decides it is time to “evolve” toward new challenges and a bigger family.

Serena Williams appears in more headlines, news and sports stories, and gossip columns as any other media sensation in the 21st Century. That was certainly the case this week, with the 41-year-old tennis legend’s announcement that she is “evolving away from tennis.”

She let out the word on her “evolution” in a cover story of the just-released September issue of Vogue.

Retirement? Williams avoided using that specific word, and later in the 3000-word article defined her terms more specifically, but even with the carefully worded workaround, there was nary a media outlet in the Free World that didn’t jump on the story immediately.

That’s been the case involving Serena Williams for more than two decades, beginning back in 1999 when, as a 17-year-old, she won the Women’s Singles title at the 1999 U.S. Open. Her victory was the first of what has grown into 23 Grand Slam singles titles (which include seven at the Australian Open, three at the French Open, seven at Wimbledon, and six at the U.S. Open).

Over the past 20-plus years, her presence, talent, and power, alongside that of her older sister Venus Williams (a former No. 1 player who has won seven Grand Slam singles titles), have transcended tennis and changed the world’s perception of strength, endurance and dominance of female athletes. Recent years have seen a huge and seemingly unending online debate about who is the greatest athlete of all time, Serena Williams or quarterback Tom Brady.

Paralleling her athletic journey has been her worldwide recognition as a force in business (Forbes lists her as the highest-earning woman athlete of all time), fashion and entertainment.

That said, there’s something fitting about essentially announcing her retirement from professional tennis with very carefully chosen words in an as-told-to cover story (with Rob Haskell) in Vogue’s famed September issue.

“I have never liked the word retirement. It doesn’t feel like a modern word to me. I’ve been thinking of this as a transition, but I want to be sensitive about how I use that word, which means something very specific and important to a community of people,” she states, four paragraphs into the story. “Maybe the best word to describe what I’m up to is evolution. I’m here to tell you that I’m evolving away from tennis, toward other things that are important to me.”

The issue arrives a little more than two weeks before the start of the U.S. Open on August 29, which, if we’re to believe what William says, will be her final appearance in a Grand Slam event.

RELATED: Serena Williams On The Importance of Believing In Yourself

The story finds the tennis pro musing about her career, her beginnings under the tutelage of her parents alongside sister Venus, her astounding rise and continued supremacy as a professional tennis player, her love of husband of five years, Reddit co-founder Alexis Ohanian, and their five-year-old daughter, Olympia, and what she terms her reluctance “to admit to myself or anyone else that I have to move on from playing tennis.”

While Williams is clearly not traditionally “thrilled” about retiring (“I know that a lot of people are excited about and look forward to retiring, and I really wish I felt that way,” she said), it is her love of family and a desire to make it bigger, coupled with a business she recently started, that appear to have prompted her move toward retirement.

Serena Is Looking Forward to Growing Her Family

Williams’ venture, eponymously named Serena Ventures, is a venture capital firm that she “quietly started a few years ago” which invests in early-stage ideas and companies, many in technology and run by women. She is proud to point out that a healthy seventy-eight percent of the firm’s portfolio is for companies started by women and people of color. According to its founder, Serena Ventures was an all-female business until recently, when they hired their first man.

She clearly believes that the goal of having it all — success and satisfaction in one’s professional and personal lives — is attainable, but neither comes without a sacrifice.

“Believe me, I never wanted to have to choose between tennis and a family. I don’t think it’s fair,” she says. “If I were a guy, I wouldn’t be writing this because I’d be out there playing and winning while my wife was doing the physical labor of expanding our family.

“Maybe I’d be more of a Tom Brady if I had that opportunity.”

Serena Plans to Focus on Her Family and New Business Venture

Still, with the sun setting on the athletic career that has defined her, and the prospect of a growing family and strides forward in a burgeoning business, Williams’ is a prime example of how personal, professional, and spiritual success can be defined and redefined over the course of time as one acknowledges that personal sacrifice will always play a role in the process, as will the necessity to reassess priorities and limitations in pursuit of one’s goals.

And for Serena Williams, that next chapter begins with putting down her Grand Slam-winning racket after the upcoming U.S. Open.

“There comes a time in life when we have to decide to move in a different direction. That time is always hard when you love something so much. My goodness do I enjoy tennis,” she stated in an Instagram post the day her cover story was released.

“But now, the countdown has begun. I have to focus on being a mom, my spiritual goals and finally discovering a different, but just as exciting Serena. I’m gonna relish these next few weeks.”