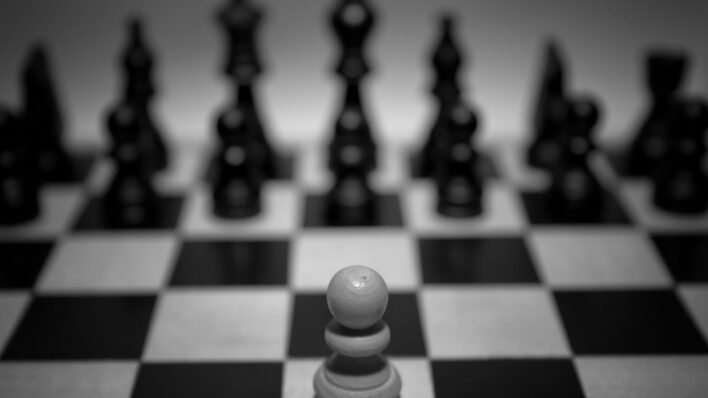 Going Against the Odds To Be Successful

Before you make a choice, you usually evaluate the odds. As any rational thinking person, you won’t be willing to
By Calvino Miguel    May 1, 2016

Before you make a choice, you usually evaluate the odds. As any rational thinking person, you won’t be willing to do something if the chance of winning seems too low. The truth is that it’s all about how you perceive your likelihood of success. So, ironically if you want to be successful you need to go against the odds.

How Going Against The Odds Will Make You Successful

When we grow up, life becomes way too serious and no fun at all! You have growing responsibilities, and social pressure is always on your neck.

But do you remember that as a kid, you didn’t think much about the things you did? You just did it! You didn’t even care about what people thought about you; the only goal was happiness. But somewhere along the way people’s opinions of you began to matter and somehow you ended up incorporating their opinions into your reality.

Try to remember what you wanted as a child. Maybe you wanted to become a musician, but people laughed at you and your dreams telling you that you would never make it. The sad part is that you actually listened to those people, just to avoid criticism, took a path that was more “realistic” and socially acceptable.

Unfortunately, you ended up paying a high price; your joy of life.

Awake the inner child in you again and start following what you like, regardless of the probability to reach your goals.

When you grow up you tend to get told the world is the way it is and your life is just to live your life inside that world.  We’ve all heard it. Try not to bash into the walls too much. Try to have a nice family, have fun, save a little money.

Life can be much broader once you discover one simple fact. As Steve Jobs once said:

“Everything around you that you call life was made up by people that were no smarter than you and you can change it, you can influence it, you can build your own things that other people can use.  Once you learn that, you’ll never be the same again.”

Don’t choose a dream by how hard it is to achieve; you should instead do something you love regardless of the odds.

The interesting thing about taking a hard path is that there is almost no competition along the way. This large advantage is often overlooked. I’m often reminded of the Les Brown quote “People who aren’t successful in life don’t fail because they aim to high and miss, but precisely because they aim too low and hit.”

If you quit your goals because the odds are against you, you’ll always end up working on ideas that have a higher probability of success, and this is exactly what you want to avoid doing.

When you do things that have a higher chance of success, that means that more people are willing to do the same thing as you are. That almost always means that the reward is also small because so many people are pursuing it. But when your dream is hard to achieve, most rational people usually give up along the way, leaving you one of the few people to remain in the race. So to get the bigger reward you have to go against the odds, in other words, you have to be a little crazy.

Never be afraid to have a little sane touch of madness. I remember when I was six years old, and I heard my neighbors talking about the future. One of them said, that someday in the future it would be possible to fly to Mars as an average person. Everyone called that man crazy.

Well now, 17 years later, everyone is cheering for Elon Musk and Jeff Bezos among others.

As you can read in the New York Times Best Seller Elon Musk: Tesla, SpaceX, and the Quest for a Fantastic Future, Elon Musk’s childhood dream was for humans to colonize Mars. To get to his dream, he had the crazy idea of creating a rocket company that would build a better and cheaper rocket that even NASA thought was possible. When Elon Musk asked NASA for help on this project, they thought he was crazy and ignored his overtures. Elon Musk decided to go at it alone. He was determined to create a better and cheaper rocket than NASA so that ordinary people could, one day,  can fly to Mars. But it wasn’t easy. SpaceX tried to launch a rocket three times, and it failed every time. They ran out of money, and Elon Musk had to mortgage his house and get loans from his (rich) friends, but eventually he gathered enough money for one last try and on that last try is when they had their breakthrough. SpaceX was able to fly a rocket into space at 1/10th NASA’s cost. Now the whole world is talking about how people will be visiting Mars in the near future, and NASA even pays SpaceX to use their technology.

Surely it seems crazy to think that big! No sane man would even dare to think about colonizing Mars. But that’s what makes the extremely successful people so successful; they always aim for the impossible.

Here’s to the crazy ones. The misfits. The rebels. The troublemakers. The round pegs in the square holes. The ones who see things differently. They’re not fond of rules. And they have no respect for the status quo. You can quote them, disagree with them, glorify or vilify them. But the only thing you can’t do is ignore them.

Because they change things.

They push the human race forward. And while some may see them as the crazy ones, we see genius. Because the people who are crazy enough to think they can change the world, are the ones who do.