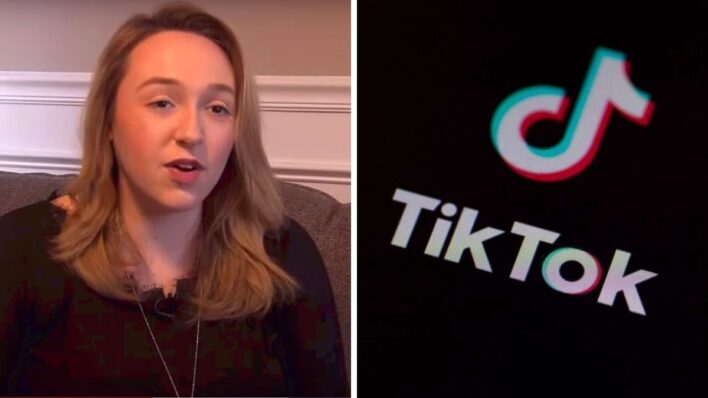 The app, originally famous for funny dancing and lip-syncing videos, has the potential to share vital information and save lives.
By Sophie Babinski    November 2, 2021

The app, originally famous for funny dancing and lip-syncing videos, has the potential to share vital information and save lives.

Alex Griswold, 24, is a frequent Tik-Tok user, who often uses the app to post lighthearted videos featuring his family and his wife. One such video, titled “Here’s what its like being married”, went viral and caught the attention of several Tik-Tokers, including Lizzie Wells, who knew something wasn’t quite right as soon as she watched it.

Griswold’s silly video about his marriage featured a scene in which his wife is popping the pimples on his back. In the frame, viewers can see some of his moles- and one of them looked abnormal. Lizzie Wells, a melanoma survivor herself, knew she had to alert the Tik-Toker and encourage him to get a skin check.

Lizzie, who is studying to become a neurosurgeon, was determined to get through to Griswold, commenting on his post and tracking down his e-mail address.

“I immediately paused the video and I was like, ‘I need to get a hold of this person.’ And so I commented on the video,” Wells, who is studying to be a doctor, told ABC News.

After seeing Wells’ and another Tik-Tok user’s comments, Griswold made an appointment to see the dermatologist. There, he was told that his mole was indeed dangerous. He was told that the issue is resolved for the time being, but that “there still is a chance” the growth could return.

Griswold made a follow up video called “here’s how Tik-Tok saved my life” to tell the story of what happened, thank the commenters who insisted he get his back checked, and remind us all that the world can be a wonderful place.

Alphabet to the rescue

Wells says she referred to the ABCDE Rule when determining whether the mole on Griswold’s back was something to be concerned about. The rule consists of observing the following 5 features of a mole: A: asymmetry, B: border that appears irregular, C: colors that are too dark or inconsistent, D: diameter that is bigger than a pencil eraser, and E: evolving size, shape, or color over time.

Alex Griswold’s story is very different from much of what we hear about social media these days. It seems like what we see and hear in the news is fear-based stories about the evils of the internet and media, and this story is a reminder that the world is a wonderful place and that the power of social media can be used for good. Families are reunited, old lovers are brought back together, and lives, like Alex Griswold’s, are saved.