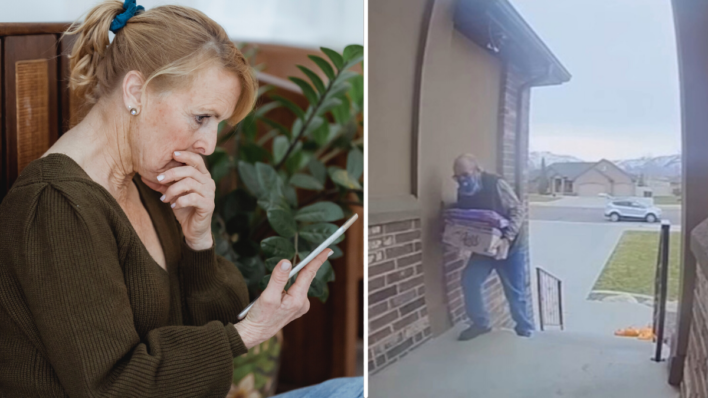 When a woman noticed an older man struggling while delivering her groceries, she decided to help and changed his life.
By Lindsey Staub    July 28, 2022

When a woman noticed an older man struggling while delivering her groceries, she decided to help and changed his life.

On November 15, Jen Cantell Weiss ordered groceries to her home in Ogden, Utah. After the goods were delivered, she watched the footage from her front door camera and was surprised by what she saw.

The video revealed an older man struggling to make it up the front steps as he dropped off Weiss’s order. She posted the footage on her Facebook, hoping she would find him this way.

“I had an order delivered this AM and the gentleman doing the delivery really struggled getting up my stairs with the pack of soda. I didn’t watch this video till after he was already gone, or else I would have gone out to help him,” Weiss wrote on Facebook. “Seeing this video makes me feel so bad.”

A relative of the man saw the post and put Weiss in touch with him. The elderly man was Larry, a veteran who suffered a stroke earlier in 2020 and had to relearn how to walk.

“I was concerned for him and wanted to learn more about his situation and what I could do to help him so he wouldn’t need to do deliveries anymore, especially during the winter months,” Weiss told FOX TV.

RELATED: Cashier Saves Elderly Woman from a $3k Scam – With One Perfect Question

Larry had taken the delivery job to pay for roof repairs, which he desperately needed. In the post, Weiss shared his Venmo information for people to make donations so that he could retire from doing deliveries and fix his roof.

“He was so careful and particular with how he placed things and arranged them on my porch. This was clearly a man who takes great pride in his work, even if it is just delivering someone’s groceries. He obviously has a great work ethic even with his health struggles and that really made me want to help him however I could,” Weiss shared.

The donations poured in, and Larry was surprised and grateful. “He was completely speechless and really surprised that so many kind people wanted to help him,” Weiss shared. “He was just so blown away by everyone’s generosity.”

Back on Facebook, Weiss shared how much the donations have helped Larry, who was able to repair his roof and quit his delivery job.

“I have been in touch with him and he is overwhelmed with gratitude,” she said. “He did NOT ask for any help, but I love that people are touched by his story and want to help lighten his load a bit. Thank you so much everyone!”

How One Woman Proved the Importance of Leading With Compassion

Though grateful for all the help they received, Larry and his wife asked everyone to stop donating to them and instead donate to Toys for Tots or a local food bank. He told Weiss that he received more than enough and wanted the donations to go to people who needed them more.

“Everything we do has the potential to help someone and change someone’s day, week, or life… you just never know how big of an impact you could have on someone,” Weiss said.

When Weiss saw a man struggling, she didn’t dismiss him, but she reached out to learn his story and to help.

Her compassion changed the life of a resilient man, a veteran who recently relearned to walk. If you see a person in need, reach out to help — you never know what kind of impact you can have.