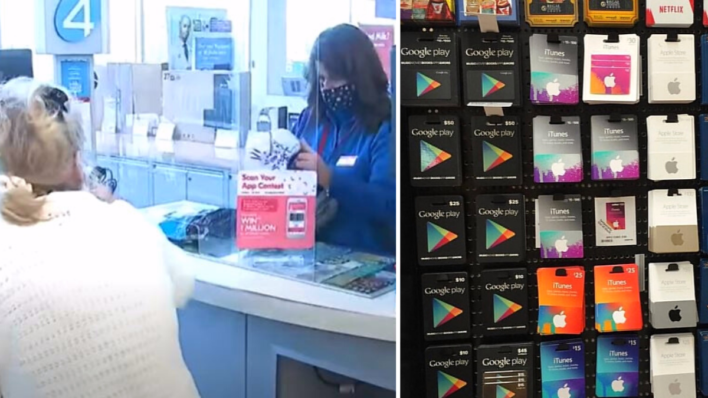 When an elderly woman tried to purchase gift cards worth $3000, one alert cashier stopped her from losing money to a scam.
By Joel Balsam    March 22, 2022

When an elderly woman tried to purchase gift cards worth $3000, one alert cashier stopped her from losing money to a scam.

When Cathy Lumia saw an elderly woman trying to buy $3,000 worth of Google gift cards, alarm bells went off in her head.

Lumia, a cashier at an Ontario pharmacy, surely got one of those scam calls supposedly from a federal agency — who hasn’t? But Lumia knew enough to hang up.

Still, there are thousands of people who fall for these scams, especially elderly people. According to the FBI, senior citizens lost nearly $1 billion due to scams in 2020 during the height of the pandemic in the United States. Could this be what happened to the customer?

RELATED: How To Save Money

“It sounded very fishy an elderly person coming in to buy $3,000 worth of Google gifts cards,” Lumia told CTV News.

Lumia didn’t want to offend the woman. It’s also her job to ring things through at the cash register, but she couldn’t resist asking a simple question: “I asked her, did they tell you not to speak with anyone about this situation?'” To which, the woman answered that, indeed, “I’m not to talk about it with anyone.”

Realizing the woman was probably a victim of a Canada Revenue Agency scam, Lumia contacted her manager and they decided to prevent the purchase. Their gut feeling appeared to be correct. According to police, gift cards, cryptocurrency, and wire transfers are frequently demanded by scammers.

Speaking to CTV News, Lumia says she’s relieved that following her gut was the right thing to do.

I feel fantastic because these scammers didn’t get the Google cards and I saved her a whole lot of money.

Protecting Vulnerable Scam Victims Is Always Worth It

Working as a cashier doesn’t pay a lot of money. It can be so easy to just overlook a gut feeling that something is off with a purchase. Stopping scams isn’t part of her job description, of course, so why do it?

But Lumia took pride in her work, and not only that, she took responsibility for helping seniors who too often fall for cruel scams. For that, she is brave and an inspiration for all of us who want to do the right thing.