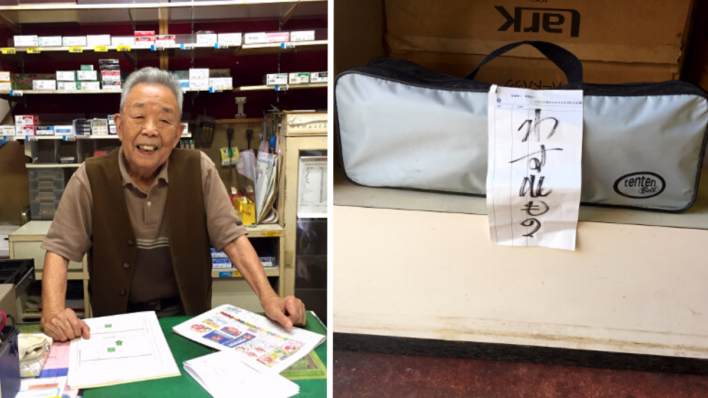 Instead of Retiring, 90-Year-Old Man Keeps Store Open After 50 Years For One Surprising Reason

But one day, SoraNews24 reporter Ryo decided to go in and check it out. His main concern was why the shop’s shutters stayed only partially open.

Holding out for years

Before Ryo entered, a pang of fear hit him. He pictured himself being the victim in a horror movie, but he went in anyway.

As soon as the reporter stepped in, he heard an enthusiastic Japanese greeting: “Irasshaaaaiii!”

The owner explained that the store had been open for half a century, but he didn’t have the energy to sell candy anymore. Instead, he only sold cigarettes from a small counter within the store.

When asked why he kept the store open at all, Uchiyama had a heartwarming response.

I keep a bag by the door that a customer left on the counter two years ago. Honestly I want to just close the whole thing up, but because the bag’s owner might come by looking for it, I keep the door open just a little bit.

Ryo looked down and, sure enough, there was a small bag on display with a small sign that read, “forgotten item.”

In the two years since possessing the bag, Uchiyama never looked into it, though he presumed it was a small machine.

“Ryo left the shop feeling a little better about humanity and was glad that there are people like Mr. Uchiyama living the good life, chatting up the occasional customer, and keeping hope eternal,” the SoraNews24 story continues.

Be an honest human

This 90-year-old shopkeeper went above and beyond instead of tossing the bag aside and going on his way. His honesty is proof that there are still good people out there, and we would be wise to think of him every time we encounter something that isn’t ours.