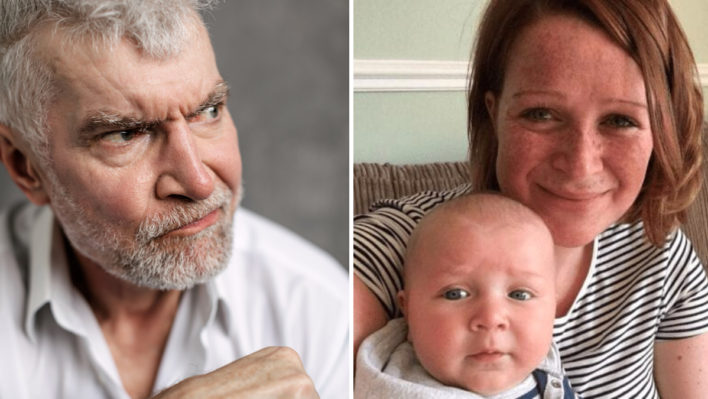 When an 8-month-old boy wouldn’t stop crying at a restaurant, one man had a surprising response.
By Sophie Babinski    November 11, 2022

When an 8-month-old boy wouldn’t stop crying at a restaurant, one man had a surprising response.

Parenting is not always easy — in fact, it is probably one of the hardest things any of us ever do. So, when one young mother was feeling ashamed of herself after being attacked by a young man at a restaurant, his father stepped in with some choice words.

Why One Man Defended a Young Mom at a Restaurant

While it’s true that babies on airplanes or in restaurants can be loud and a little bit disruptive, the parents of the child are always struggling more than onlookers are.

A young mother, Lucy Hatami, was one of those struggling parents when she went out to eat with her 8-month-old son. She had been cooped up alone with him for 8 months, and she was finally fed up. She decided to take her son out to a restaurant, but what she encountered there made an already challenging experience ugly.

Lucy was struggling with her baby, trying to eat her meal while her son screamed and cried. His outburst disturbed the other restaurant patrons, but they all stayed quiet — except for one young man.

RELATED: ‘I Want You to Be Friends’: 6-Year-Old Girl’s Heartbreaking Plea to Divorced Parents Is a Major Wake Up Call

The man was in his 20s and made it very obvious that he was annoyed by Lucy and her son’s presence. He sighed and said “I wish she’d shut that thing up” within earshot.

The young mom was mortified, but she struggled to defend herself and her baby. Luckily, she didn’t have to. An unlikely hero quickly came to her defense — the boy’s own father!

The rude young man who had made Lucy feel uncomfortable was eating with his father when he decided to be rude to his fellow diner. His father immediately intervened and let the younger man know that he had been a disruptive little baby too once. He told his son to straighten up.

How a Fellow Parent Proved the Importance of Compassion

“Before I could even respond, his dad comes up behind him, clips him round the ear and says, ‘What and you think you were perfect? You were a right little sod. Now stop being a brat, go up there and apologize to her and offer to get her breakfast as she clearly has her hands full!'” Lucy explained.

Lucy was amazed! The younger man apologized and ended up helping her get her buffet breakfast and a hot coffee, which she was able to enjoy guilt-free.

RELATED: Mom Shamed For Her Parenting Skills Strikes Back With The Most Honest Response

Lucy posted about the incident on social media, where it went viral. Social media users loved how the father in the story hadn’t forgotten what it was like to have small children. He remembered the struggle, showed Lucy compassion, and used the incident as a teachable moment for his son.

Overall, the story is a good lesson for all of us: Before you complain, put yourself in another’s shoes. Especially when it comes to parenting, you might find yourselves in equally difficult situations, and you will hope that those around you offer the same compassion you offer them.