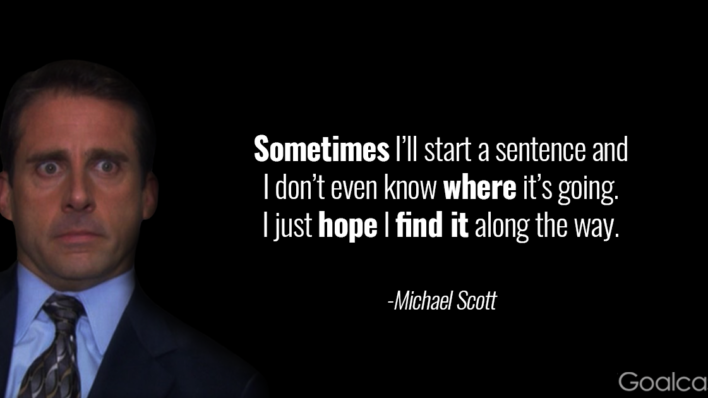 We can all agree that Michael Scott is The Office’s funniest and most lovable character. Here are 19 Michael Scott quotes to give you a good laugh.
By Flavia Medrut    August 17, 2018

We can all agree that Michael Scott is The Office’s funniest and most lovable character. Here are 19 Michael Scott quotes to give you a good laugh.

After nine full seasons of The Office (U.S. version), we can all agree that Michael Scott is one of the most lovable fictional characters. Why? Because despite his inappropriate behavior, he is the world’s best boss. Michael Scott is deeply flawed, he makes sexual and racist comments and he has little to no tact at all. Obviously many of us would probably not laugh too hard at his jokes if he were our actual boss – his own coworkers despised him in the show at first.

But at the heart of Michael’s character resides an insatiable need to make friends. He constantly tries to make people like him the best way he knows how – cracking jokes all the time – and usually fails. But he eventually figures out that his words and actions affect the others around him. So, over the years, he develops into a fully-realized adult and finally bonds with his coworkers.

Scott actually has a kind heart. He loves his working place and everyone in it, and he did everything he could to make work more fun.

Here are 19 Michael Scott quotes to give you a good laugh and ease your day at the office: Would I rather be feared or loved? That’s easy. Both. I want people to be afraid of how much they love me.

Do I have a special someone? Well, yeah of course. A bunch of ’em. My employees.

They say on your deathbed you never wish you spent more time at the office — but I will.

The most sacred thing I do is care and provide for my workers, my family. I give them money. I give them food. Not directly, but through the money.

You know what they say ‘Fool me once, strike one, but fool me twice…strike three.’

Now, you may look around and see two groups here. White collar, blue collar. But I don’t see it that way. And you know why not? Because I am collar-blind.

And I’m optimistic because everyday I get a little more desperate.

I’m an early bird and I’m a night owl. So I’m wise and I have worms.

There’s no such thing as an appropriate joke. That’s why it’s called a joke.

Society teaches us that having feelings and crying is bad and wrong. Well, that’s baloney, because grief isn’t wrong. There’s such a thing as good grief. Just ask Charlie Brown.

I’m not superstitious. But I’m a little stitious.

And I knew exactly what to do. But in a much more real sense, I had no idea what to do.

Presents are the best way to show how much you care. It’s a tangible thing you can point at and say, ‘Hey man, I love you. This many dollars worth.’

There is no greater feeling than when two people who are perfect for each other overcome all obstacles, and find true love.

Sometimes I’ll start a sentence and I don’t even know where it’s going. I just hope I find it along the way.

I love inside jokes. Love to be a part of one someday.

That’s what she said!