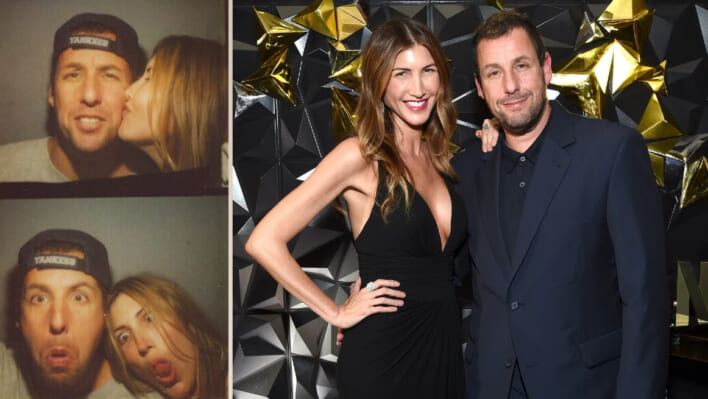 Adam Sandler Insists “Nobody Wants to Hear About My Secret to Marriage,” But He Is Dead Wrong

From their introduction to each other while making one of his movies in 1999 to their entire family appearing in his latest film in 2022, Adam Sandler and his wife Jackie Sandler “don’t ever think of not being together.”
By Laurence Lerman    November 17, 2022

From their introduction to each other while making one of his movies in 1999 to their entire family appearing in his latest film in 2022, Adam Sandler and his wife Jackie Sandler “don’t ever think of not being together.”

It was during the making of Adam Sandler’s 1999 Big Daddy, an exemplary Sandler comedy concerning a lazy and silly law school graduate who adopts a little boy to impress his girlfriend, that the hard-working comedian shared a brief scene with actress Jackie Titone.

Well, he barely shared the scene with her. In her blink-and-you-miss-it role as a waitress in a Blarney Stone pub, Jackie exchanges a couple of lines with young Dylan or Cole Sprouse—we’re not sure which as the seven-year-old twins both portrayed the film’s little boy! Sandler does get a chance to walk by Jackie during the scene, though, commenting to his soon-to-be foster son, “It’s too bad you don’t like girls—I think you could have had her!”

It may have been a relatively unremarkable meeting in terms of memorable “meet-cute” first encounters, but clearly, just one look was all it took to ignite the enduring relationship between Adam Sandler and Jackie Titone.

Or as Sandler put it on his Instagram page in 2020 as a tribute to Jackie to acknowledge the 22nd anniversary of the day they met, “We locked eyes and fell deep.”

As Sandler alluded to, the two immediately began seeing each other and within a year of their getting together, Jackie Titone (or Jacqueline Titone, as she was billed in Big Daddy) made the decision to convert from Christianity to Judaism. It was a clear sign that Jackie and the Jewish Sandler were getting very serious.

“I’m proud of being a Jew and that’s what I am,” Sandler once said in an interview with Howard Stern of his dedication to his faith “I get that from my father and mother.”

RELATED: Adam Sandler Didn’t Listen When His Professor Told Him To Stop

That’s not a surprising to hear from the writer and singer of the popular 1994 novelty number “The Chanukah Song!”

Adam and Jackie engaged shortly after her conversion and were married in an outdoor Jewish ceremony in the summer of 2003. A few years later, in May 2006, the couple welcomed their first child, daughter Sadie, followed by their second daughter, Sunny, in November 2008.   With a growing family at home and a thriving movie career at the office, Adam continued to crank out popular comedy films at the furious rate of nearly one per year, many produced by his own production entity, Happy Gilmore Productions.

Jackie Has Appeared in Many of her Husband’s Films

It was actually in Deuce Bigalow that Jackie made her acting debut (the film was released several months after Big Daddy), with Schneider himself recommending her to Sandler for her would be her part in Big Daddy.

Though Jackie had moved to L.A. from Coral Springs, Florida following high school to pursue a modeling and acting career, her interests evidently shifted after she and Sandler got together and started a family. But the bug to have a little fun on screen—particularly opposite her husband!—had taken hold and Jackie has since enjoyed walk-ons in more than a dozen of her husband’s films, including 50 First Dates, Grown Ups, I Now Pronounce You Chuck and Larry, That’s My Boy, Pixels and Hubie Halloween.

She looks like she had the most fun as a put-upon flight attendant in Murder Mystery, which co-starred Jennifer Aniston as Sandler’s wife. Aniston, a good friend of Sandler’s (and his co-star several years earlier in Just Go With It), has also grown close with Jackie over the years, even to the point that Jackie encourages her husband to throw in some added oomph when he has a kissing scene with the former Friends star.

We’re assuming that it’s all in good, clean and comfortable fun!

Jackie Converted to Judaism Before Their Marriage

From the looks of it, Adam and Jackie spend a lot of time together, at work and play, and are very supportive of each other’s lives and time. Sandler always plays a big part in what’s going down at home, while Jackie puts effort into helping her husband in his career choices. A prime is example is when Jackie urged her husband to take the substantial dramatic role of a fast-talking, in-over-his-head New York City jeweller in the dark comedy-drama Uncut Gems. Sandler’s performance in the much-lauded film was nominated for a slew of critics awards, with the comic-turned-actor winning top honors from the Austin Film Critics Association and the Boston Society of Film Critics.

The Sandler family affair also includes daughters Sadie and Sunny, now 16 and 13, respectively, who have also appeared in nearly as many of their daddy’s films as their mother has, as well as other Happy Gilmore Productions.

Next up, the Sandlers—daughters included—will star in the Netflix film adaptation of the YA comic novel You Are SO Not Invited To My Bat Mitzvah. The comedy is currently in production in Canada and the word is that the two young Sandler progeny will each be getting paid $65,000 for their roles. Talk about laughing all the way to the bank!

Sandler’s Family Will All Appear in His New Movie

The Sandlers are another example of a Hollywood family that laughs together onscreen, behind the scenes and at home. In other words, theirs is a family that spends a large chunk of time together—and there appears to be love and happiness a’plenty to go ‘round.

Even though Sandler laughed at the prospect of people wanting to know about his “secret” to marriage when asked during an interview with the AARP, he was forthcoming and honest with his answer:

“I guess here’s the secret: Jackie and I like spending time with each other. We try to make each other laugh, try to listen, try to include each other, try to support each other. We try our best — that’s all,” Sandler said. “And we don’t ever think of not being together. We always talk about our future together.”

We’ve seen this before: Listening to each other, supporting each other, making plans with each other—and all of it while being TOGETHER—is a winning formula for everyone!