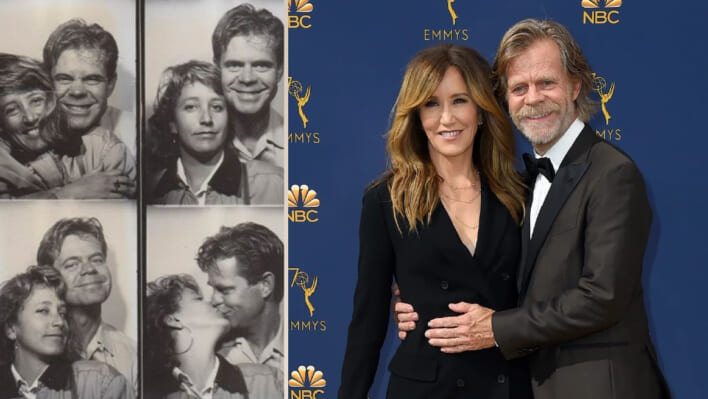 Felicity Huffman and William H. Macy have been in the spotlight for decades and they currently have one of the most happy and long-lasting marriages in Hollywood.
By Flavia Medrut    October 25, 2022

Felicity Huffman and William H. Macy have been in the spotlight for decades and they currently have one of the most happy and long-lasting marriages in Hollywood.

Best known for their roles in Desperate Housewives and Shameless respectively, Felicity Huffman and William H. Macy are not only a cute couple but also a winning one. In 2012, the duo received a rare double star on the Hollywood Walk of Fame, becoming the second couple to take part in a double ceremony.

While nowadays the couple seems to be more than happy and try to keep their relationship off the radar as much as possible, back in the days, Huffman was so scared of marriage that she actually “preferred to step in front of a bus.” So they took it slow… really slow!

Married for almost 25 years now, they originally dated on and off and even broke up for several years. However, they finally realized they were destined to be soulmates and belong together.

But what keeps a couple (especially a Hollywood one) together for so many years? Let’s take a closer look at their relationship timeline and find out their secrets.

Huffman and Macy first met in the early 80’s while she was a student at NYU. For her it was love at first sight.

Bill has asked Felicity to marry him several times during this period, but she was reluctant. Her parents divorced when she was only a baby and she was scared that she’d lose her identity in marriage. “I thought I’d disappear. Men’s stock when they get married goes up. Women’s stock goes down.”

When Did Felicity Huffman and William H. Macy Marry?

Huffman was scared of marriage but eventually realized that she was more scared of losing the love of her life. She couldn’t say “no” forever after dating for such a long time.

So, on September 6, 1997, Macy and Huffman finally tied the knot at Huffman’s childhood home in Colorado. In years since, the couple has celebrated their anniversary on social media, posting heartwarming photos and captions.

Felicity and William have two daughters together. They welcomed their first daughter, Sophia Grace Macy, on August 1, 2000, and on March 14, 2002, their second daughter – Georgia Grace.

Huffman and Macy Even Work Together

Some couples might find it hard to work together, but it’s not the case for these two. Their relationship has blossomed over the years and so have their careers. Acting is their language – they support each other, read scripts together and they occasionally work together on TV and film projects.

RELATED: How Kelly Ripa and Mark Consuelos Prove Working Together Can Make a Successful Marriage – Even After 26-Years

Both appeared alongside each other in the movie Cake (2014), which stars Jennifer Aniston. Later, in 2018, Macy and Huffman played the roles of Wyatt and Poppy Ogburn in Krystal, a film directed by Macy himself.

Their hard work as actors finally paid off in 2016 – both of them were nominated at the Emmy Awards. Huffman was nominated for outstanding lead actress in a TV series for her role in American Crime and Macy for outstanding lead actor in a comedy series for his work in Shameless. They both thought that they had no chance to win those awards and unfortunately they were right. Maybe they’ll have more luck in the future, but until then, having their work recognized can be considered a win by itself.

Even In Dark Times, the Couple Remained Strong

The couple had their ups and downs over the years, but no obstacle has been greater for them than the 2019 college admission scandal in which Huffman was involved. The actress was accused of bribing her eldest daughter’s way into college.

Felicity was accused of paying Rick Singer $15,000 to change Sophia’s SAT scores. Eventually, the Desperate Housewives actress pled guilty and was sentenced to 14 days of jail time, received a $30,000 fine, and 250 hours of community service.

RELATED: 36 Marriage Quotes to Celebrate the Power of Your Bond

Before sentencing, her family and close friends penned character reference letters in order to reduce her jail time. Macy and her co-star Eva Longoria were among the ones who tried to convince the judge that she was worthy of a reduced sentence, by praising her both as a parent and a professional.

Although Huffman and her husband have always tried to shield their daughters from fame and scandal, the two girls had to see their mother handcuffed by the authorities, as she was arrested at her home. That was the moment when, as a couple, Macy and Huffman hit the rocks.

But despite everything, the actor stood by his wife’s side and did whatever he could to defend her reputation. What she did was wrong, no doubt about it, but that doesn’t make her a bad person overall. In his letter to the judge Macy writes, “If I may I’d like to tell you one more thing: every good thing in my life is because of Felicity Huffman.”

In a joke at the 2016 Emmy Awards, the couple said that the secret to their marriage was the fact that they had married each other. Joke or no joke, their secret lies in more than simply tying the knot.

To keep the romance alive, the two sometimes rent a room at a hotel and spend weekends on their own. They prioritize time together in smaller ways too – they sit down for at least half an hour and just talk – a little something that allows them to check in with the other. A little time to find out what’s going on with the other one, without talking back.

According to Macy, “Our marriage is a fairytale marriage.”

Huffman loves to do anything with her significant other. Some of their favorite activities include: running, reading, and eating at a Los Angeles pizzeria on date nights.

Just like any other couple, they sometimes tend to annoy one another. For example, Huffman has a bad habit of leaving the lids off of containers, and Macy sometimes leaves the house with her car keys in his pocket. She likes to joke about this saying that she and her daughters eventually take an Uber to school.

But if these are the only reasons to get into an argument, we’re sure they’re going to be together forever.

Fairytales Can Happen With the Right Ingredients

When asked about her fountain of youth, Huffman credits her husband for her good looks, saying that marrying Macy was the best thing she ever did

So there you have it: love, support even when the going gets tough, being able to work in the same industry with no problems whatsoever, and of course communication and date nights.

It’s not always easy to keep the romance alive since most of us live some chaotic lives, but if two Hollywood stars can make a relationship last for that long, then it looks like there is hope for all.