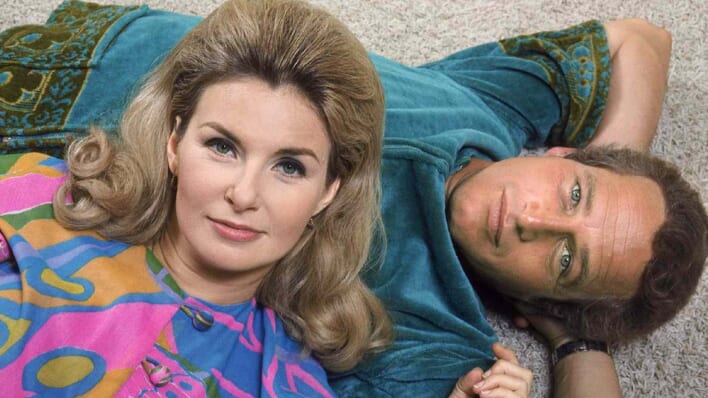 Hollywood’s former “golden couple” got that title for a reason, and that is due to their efforts to make their bond survive and strengthen their careers.
By Jeff Liddell    October 20, 2022

Hollywood’s former “golden couple” got that title for a reason, and that is due to their efforts to make their bond survive and strengthen their careers.

The late Paul Newman was a man of many skills and occupations. In addition to his immortalized acting career, he has dabbled in film directing, race car driving, philanthropy, and entrepreneurship. His most notable credits include The Hustler, Butch Cassidy and the Sundance Kid, The Life and Times of Judge Roy Bean, Slap Shot, The Towering Inferno, and the Pixar film Cars, which was his final non-documentary role.

Newman’s career has also seen him win several of the entertainment industry’s most prestigious awards, with some of them being won more than once. Ceremonies and events that blessed Newman with the title of recipient include the Academy Awards, the Golden Globe Awards, the Emmy Awards, the Cannes Film Festival, and the British Academy Film Awards.

RELATED: Here’s What We Need to Know About Elizabeth Banks’ Husband Max Handelman

With all his accomplishments and the recognition of said projects, Paul Newman was certainly a Hollywood legend, one of the big names of the American film industry’s golden age in particular. Having secured leads in dozens of unique films, Newman manages to stand apart due to his successful roles seldom being tied to the franchising popularized by the blockbuster era in the second half of the ‘70s.

Despite celebrity culture encouraging people to glorify movie stars as products of individual successes and hard work, Paul Newman’s career was not a one-man show. Beyond the fact that filmmaking is a collaborative medium, he also had plenty of support from his wife, fellow actress Joanne Woodward, as his recently released posthumous biography, The Extraordinary Life of an Ordinary Man: A Memoir, reveals.

Paul Newman’s experience with marriage did not begin with Joanne Woodward. He was already married by the time his acting career was on the rise. He was originally married to Jackie Witte, and the couple moved to New York City in 1951. A couple of years later, Newman made his Broadway theater debut as Alan Seymour in Picnic, a play by William Inge. The group of other famous actors from that era that were in the play included Kim Stanley, Eileen Heckart, and Reta Shaw.

Newman and Woodward met during the production of the play. While Newman played one of the play’s major characters, Woodward was an understudy. They would not meet again until almost half a decade later. Between that time period and the production of Picnic, Newman worked on other Broadway works, such as The Desperate Hours and Sweet Bird of Youth, with the film version of the latter also starring him.

RELATED: Why Dwayne “The Rock” Johnson Mocked by This A-List Actress But He Can Only Laugh

He also worked on television since the medium’s earliest days as a public form of entertainment, with his first credited role being “Ice from Space”, an episode from the science fiction anthology series Tales of Tomorrow. The episode itself came out in 1952. After doing screen tests, 1954 was the year the world first saw Paul Newman on the big screen. He was the co-star of The Silver Chalice, a film that Newman would dismiss in his later years.

By 1958, Paul Newman’s Hollywood career was set in stone thanks to the box office success of Cat on a Hot Tin Roof. That same year saw the release of The Long, Hot Summer, for which he won an award for Best Actor at that year’s Cannes Film Festival. While on set just a year earlier, Paul Newman reconnected with Joanne Woodward, with whom he starred in the picture. He divorced Witte to marry Woodward, blossoming a romance and career path that can be summarized as easy to envy, especially when celebrities are notorious for having messy relationships.

Who is Joanne Woodward? The Basics

As previously mentioned, Joanne Woodward, who is still alive over a decade after her husband’s passing, worked as an actress in her lifetime. Similar to Newman, Woodward started her career in the 1950s and wound up becoming one of the Golden Age of Hollywood’s defining stars.

From being one of the first celebrities in the film industry to work on television as often as she acted on the big screen, to earning an acclaimed reputation for depicting three-dimensional and nuanced characters in an era that mostly relegated women to supportive roles, Woodward’s impact on the film industry is comparable, if not just as significant, as her husband’s. Having lasted from 1955 to 2013, almost 60 years, the longevity of Woodward’s career is both notable and impressive.

RELATED: Who is Adele’s Boyfriend? Here Are the Interesting Things to Know About Rich Paul

Woodward’s mother, Elinor, was one of the main influences in her life, as well as the person that sparked her interest in becoming an actress. Indeed, Elinor Woodward was quite the movie fan, and even named her daughter after Joan Crawford. This intensive appreciation for the motion picture, up and including honoring a celebrated and famous actress’ legacy through the name of your child, is what ultimately motivated Joanne Woodward to pursue acting as an adult.

Although Paul Newman and Joanne Crawford’s careers had a tendency to overlap with each other due to how often they collaborated during the height of their careers, both actors managed to develop their own specialties, individualizing their careers in the process. While Newman started with Broadway, Woodward was already heavily involved with television. She appeared in the aforementioned Tales of Tomorrow, as well as other shows such as Goodyear Playhouse, The Star and the Story, and Alfred Hitchcock Presents.

Coincidentally, Woodward’s success and fame as an actress would not skyrocket until around 1957, similar to Paul Newman. Her performance as the titular Eve White in The Three Faces of Eve wowed both film critics and casual moviegoers, elevating her status within the industry. Due to her role being a character with three personalities that range from being a housewife with a distinct accent to a lustful rebel, the performance truly exposed audiences to the range of Woodward’s acting skills.

This particular strength ended up defining her filmography among several other traits. The Three Faces of Eve aside, Joanne Woodward’s most notable films include Rachel, Rachel, The Effect of Gamma Rays on Man-in-the-Moon Marigolds (both directed by Newman), Mr. and Mrs. Bridge, The Age of Innocence, and Philadelphia.

Considering that the public frequently referred to Paul Newman and Joanne Woodward as “Hollywood’s golden couple”, it is safe to assume that having each other in their lives was more than beneficial to the couple in the long run. They were happily married for over 50 years, and this relationship only ended because Newman passed away. They were a rare Hollywood couple to not raise their children in the state of California, let alone in the Hollywood part of town or the surrounding neighborhoods in Los Angeles.

In fact, they decided to move to the East Coast, in Connecticut. Shielding their kids from the culture that comes with being part of the Hollywood sphere was beneficial for Newman and Woodward’s family in the long run, and not just on the parental side of things. The Extraordinary Life of an Ordinary Man: A Memoir indicated that the couple’s sex life was healthy, prolific and maybe a tad eccentric.

According to the book, Newman claimed that “Joanne gave birth to a sexual creature”, referring to himself. He also mentions the diverse settings they chose for their more intimate moments, and describes these romantic escapades as “[leaving] a trail of lust all over the place. Hotels and public parks and Hertz Rent-A-Cars.” This thrilling side to their relationship did not end at testing their daredevilish wishes in public. In the couple’s Beverly Hills home, Woodward personally customized the master bedroom, which was given the straightforward nickname: “The F*** Hut.”

Despite their dedication to each other, Newman and Woodward’s relationship was far from perfect. Arguments were not a rare sight to be seen, partially due to Newman’s drinking problems and partially because of both spouses’ quirks (as most any married couple relates to). But most importantly, the couple managed to see the positive side of things.

RELATED: Sigourney Weaver Found the Secret to Her Successful 37-Year Marriage in a Surprising Place

Overall, Woodward and Newman had their flaws, their arguments, but more importantly, they had their love, respect, and lack of excuses to make their relationship work, even if they were among the grandest performers of classic American cinema.

Through their work, they innovated storytelling techniques alongside their artistic colleagues in more ways than one. Even with the pressure that comes with being a celebrity, they found a way to live humble lives, provide a comfortable upbringing for their children, and develop a legendary legacy through their work in the Golden Age of Hollywood.